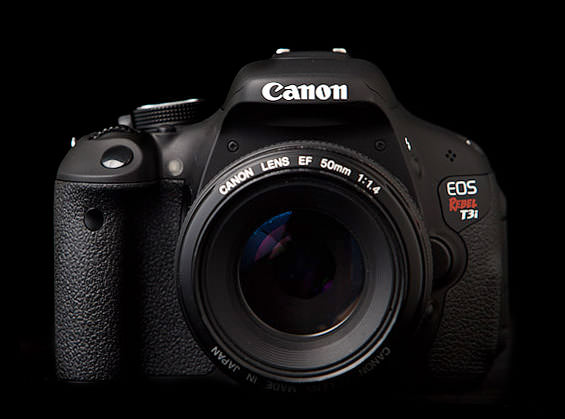 If you’re like many hobbyist photographers who think they are ready to graduate from a point-to-shoot to a DSLR, then the Canon T3i/600D is waiting across that great divide with many easy-to-use features you need to enjoy and excel in the much bigger world of digital photography.

The Canon EOS Rebel T3i faces down the competition with its 18-megapixel, APS-C-sized CMOS sensor. The Nikon D5100’s sensor is 16.2 MP, while the Panasonic Lumix DMC-G2’s is even smaller, at 12.1 MP.

A large three-inch Vari-Angle Clear View LCD screen is a first-time feature in any Canon Rebel DSLR. You’ll have a bright, clear view from any angle with 1,040,000 dot/VGA resolution and anti-reflective and smudge-resistant coatings. (The Nikon D5100 has 920,000 dots and the Panasonic competitor only 460,000.)

The concept behind the large Vari-Angle screen is to provide you with a greater “variety” of shooting angles. The tilt-and-swivel LCD extends 180 degrees from the camera body and swivels 270 degrees on its hinge. The versatility of this LCD creates more high- or low-angle opportunities in still pictures or full-HD video, makes self-portraits easier and allows it to retract to a secure position next to the camera body.

The Canon Rebel T3i and Nikon D5100 have penta-mirror viewfinders, but the Rebel provides a bit larger view. The Rebel’s viewfinder magnification is 0.85x compared to the D5100’s 0.78x. This specification as well as others results in only approximately a two-percent difference in actual viewfinder size between the two cameras.

The Rebel 3Ti does outperform the Nikon D5100 when it comes to aspect ratio options. The Rebel features a standard 3:2 ratio in live-view mode, and the added choices of 4:3, 16:9 and 1:1 ratios for either still images or video.

The Nikon D5100 may have four Live View AF (auto-focus) modes and the Rebel T3i three, but the Nikon doesn’t include the Canon’s Quick Mode that uses phase detection for faster Live View focusing. Another “green light” feature of Canon’s Live View capabilities that will have you yelling, “Make mine a Rebel T3i,” is its 10x-magnification when using manual focus in Live View mode. Nikon’s is only 7.7x magnification. This is particularly helpful if you are new to DSLRs, as it will be easier to check focus.

With full-HD video capture at 1920 x 1080 resolution in selectable frame rates of 24p, 25p or 30p, the EOS Rebel T3i offers the quality and versatility that even film students and independent filmmakers will like. A DIGIC 4 Imaging Processor and that large sensor are Canon proprietary technologies that capture fine detail and accurate color to create excellent HD video. The Rebel T3i DSLR offers three video recording modes: Full HD, HD in a 16:9 aspect ratio and Standard Definition (SD) in a 4:3 aspect ratio, all at selectable frame rates.

Canon has applied some of the innovative technology from its VIXIA line of camcorders to create the new EOS Video Snapshot feature in the Rebel T3i DSLR. Canon achieved its goal of providing its customers with a video capability that is as easy as taking digital photos. You can now record a series of two-, four- or eight-second video clips automatically. The T3i then creates a continuous Video Snapshot Album with those clips…in the camera. You can then perform additional editing, either in the camera or with Canon’s Video Snapshot Task software, on a compatible personal computer.

If you like to be more creative with your camera, then the Rebel T3i DSLR includes various Creative Filter Effects, such as Toy Camera, Soft Focus, Miniature, Grainy Black and White and Fish Eye. You control these effects with the quick menu button, and then apply them to the RAW and JPEG files after the images have been recorded. Additional selections in this menu will allow you to protect, rotate, rate and resize your photos.

These are rather simple filters and are not a substitute for the broader capabilities of editing software, but you might find yourself in a situation where the Creative Filter Effects in the Canon Rebel T3i will be time savers.

Another significant improvement in the Rebel T3i is the dual purpose of the pop-up flash. Of course, it primarily serves as an artificial light source, but it is also the first Rebel with an Integrated Speedlite Transmitter, so it can control as many as two groups of flashes directly from the camera. Beginners can take a smaller step into wireless flash photography with the “Easy Wireless” mode. On the Nikon D5100, this same capability requires an optional piece of equipment (you must spend more money!). This wireless flash technology on the Rebel may very well be one of the features that legitimize it as an “advanced” entry-level DSLR.