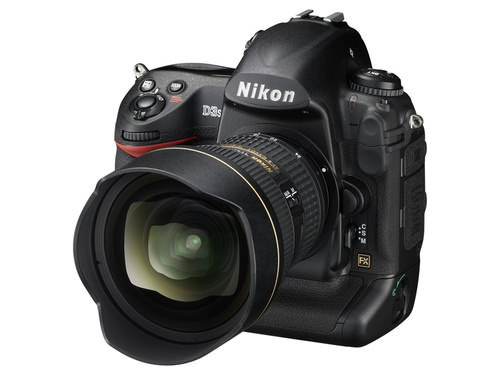 1. For digital photography, as a whole, the Nikon D3 was definitely a major game-changer, especially because its greater ISO sensitivity captures better images in low light. The newer D3S isn’t as revolutionary, but simply continues the good fight with various refinements that make it essentially a better D3. These improvements may not, at first, seem to be giant leaps forward, but any advances of DSLR capabilities at this level are likely to be viewed as jumping a chasm to the photographers who need what the D3S delivers.

2. If you prefer to spend less time rooting through camera menus to select various settings, and more time shooting, then the Nikon D3S is a welcome alternative. A new, dedicated live view button is in plain sight at the back of the camera and you’ll have quick access to an info button to choose color space and noise reduction.

4. Another significant improvement found in the Nikon D3S is the larger buffer, which allows for very acceptable images in lower light and more than 30 RAW frames in one burst. This makes the D3S an excellent tool in the hands of sports and action photographers, who typically shoot 14-bit NEF files. The larger buffer also means that performance will not suffer in most shooting situations.

5. A definite mighty leap beyond the D3 and most of the competition is the D3S’s rather extraordinary ISO range, especially at the high end. Select ISO sensitivities above 6,400 and the D3S gives any photographer a one-stop advantage over the Canon EOS 1D Mark IV, for example.

A third-party test demonstrated the D3S’s capability to generate photos at ISO 12,800 and greater that register details and precise color and are free of banding. The sensor of the D3S has no equal when it comes to transforming light into balanced images.

6. The DX format has its place for many digital photography assignments, but the 1.2X-crop mode should pique the interest of action photographers, which is one of Nikon’s primary target markets for the D3S. The 1.2X-crop mode creates an 8.4MP file, which is comparable to the magnification of Canon’s EOS 1-D series of cameras. Although the maximum frame rate of 9 fps (frames per second) is the same as the FX format, you’ll be able to record large/fine JPEGs in full-speed burst of approximately 105 frames, compared to 78.

7. The Nikon D3S is the company’s first professional DSLR with a D-Move mode and enhanced video capture at 720x1280p. The resolution may be the same as the D90, the first Nikon DSLR that could shoot video, but the D3S has contrast-detection AF (auto-focus) during filming and supports a plug-in stereo microphone.

8. What excites digital photographers the most about the D3S’s video capabilities is that it can shoot video throughout the entire ISO sensitivity range, including the “High-Sensitivity” mode, to ISO 102,400. The HS mode is extremely useful when the light level is low, although the resulting video is much grainer. Despite that the Nikon D3S will still produce acceptable video that most hobbyist/family video equipment is incapable of duplicating.

9. You’ll be able to shoot video in any of the PASM modes. Press the OK button before or during shooting and you’ll initiate real-time metering. Then, as you would with still digital photos, you can use the shutter and/or aperture settings to control the video brightness. Change the aperture during shooting and you’ll increase or decrease the depth of field, without the need to pre-set the lens to a chosen aperture.

10. The Nikon D3S shoots 11 frames per second in continuous, and DX, mode.

11. The D3S is equipped with a multi-CAM3500FX auto-focus sensor (51-point, 15 cross-type and more vertical coverage), which is fine-tuned for improved acquisition and tracking.

15.  Contrast-detect auto-focus has been significantly improved at 30% faster; and live view operates with CD or phase detect (mirror up/down).

16. Nikon has chosen to design the D3S to produce greater image quality at high ISO sensitivities, which does limits resolution, but this is the trade-off photographers must contemplate before plunking down $5,200 to $6,400 for the D3S body. The dealmaker is for those photographers who would prefer versatility and speed to additional resolution. If that describes you, then you shouldn’t hesitate to take a leap at the opportunity to own a Nikon D3S.