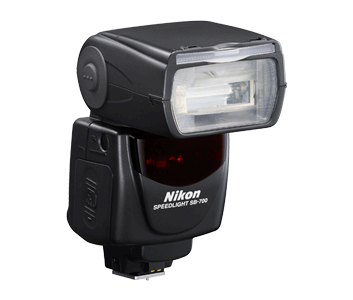 1. The Nikon SB-700 AF Speedlight is a welcome addition to Nikon's Creative Lighting System, since it is an upgrade of the archived SB-600 and provides budget-conscious photographers with a “little brother” alternative to Nikon’s top-of-the-line flash, the SB-900.

3. All of the SB-700’s features and capabilities are operational when paired with CLS-compatible cameras, which are all Nikon DSLRs, except the D1 series and D100, and the F6 film body. Coolpix models, E8400, E8800, P5000, P5100, P6000 and P7000, will accept the flash, but only limited features are available. There is even less co-functionality when the SB-700 is mounted to non-compatible cameras.

4. The flash head is equipped with the traditional Nikon built-in bounce card and wide panel, which can be used independently or together.

5. The size of the SB-700 is noticeably smaller than the SB-900. Some photographers have welcomed the smaller unit, especially when they are shooting on the move. The SB-900’s heft and weight can become quite a load to carry during a long, hand-held shoot.

6. Not only does the SB-700 flash bounce at 90 degrees above the plane and seven degrees below (with 6 click stops), but also the head rotates horizontally 180 degrees (with 8 click stops).

7. The SB-700 has been designed with an extensive array of controls, no fewer than 9 that operate separately. Nikon actually added two control improvements compared to what is found on the SB-900: A flash mode selector instead of the SB-900’s mode button and an illumination pattern switch as an easier tool than looking for it on the SB-900’s internal menu.

When you compare the controls of the SB-700 to the SB-800, you notice that the power switch has “remote” and “master” settings; the SB-800 offers a basic “on/off” control.

9. The SB-700’s user interface with menus and functions is much easier than the SB-800. For example, to select either the “remote” or “master” settings on the SB-800 required a multi-step process of pushing the “sel” button repeatedly between scrolling through menu options. On either the SB-700 or SB-900, you simply select “remote” or “master” for each separate flash and shoot.

10. The SB-700 has the same brains as the SB-900 either to slow the flash recycle time or to disable itself if the temperature reaches critical mass. Check the thermometer-like display on the rear of the unit to know when you are approaching the overheating limit.

12. Some photographers with Nikon Speedlight experience are slightly concerned that the newer units seem a bit less powerful than the older models. For example, the SB-700’s guide number is 92 feet at ISO 100; the SB-600 delivers 98 feet. The SB-900 has a guide number of 111.5, but the discontinued SB-800 is 125.

13. Full-discharge recycling time is very good for the SB-700 at approximately 2.5 seconds. The SB-900 has been tested at two seconds, although its published range is 2.5 to 4.5. By comparison, Canon claims a .01- to 6-second range for its premier 580EX II flash. All these times, however, are affected by the type of batteries used and how much they’ve drained.

14. If you’re a wise consumer and comparison shopper, then you may have concluded that the SB-700 is an excellent choice, especially for the photographer that doesn’t need to pay an extra $100 (approximately) for the few added features and capabilities of the SB-900. If your type of photography includes plenty of wireless flash set-ups, then you’ll appreciate how quickly the SB-700 becomes a reliable master or remote unit.

At approximately $300 to $350, the Nikon SB-700 AF Speedlight Flash is still a substantial purchase, but its well worth it, as it may be the only flash unit that many photographers will ever need.