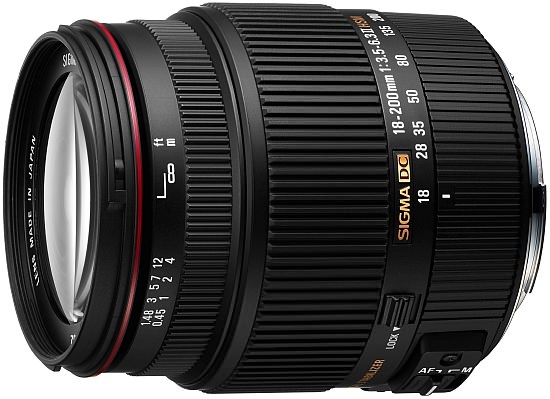 Like these lenses, the advantage of a super-zoom is that for many photographers (especially amateurs), it is an excellent choice as an all-purpose lens, either shooting casually or for traveling.

3. Price doesn’t mean much unless the Sigma also delivers competitive features, capabilities and performance. Camera shake, and the resulting blurry images, had long been the biggest obstacle to overcome in super-zooms and Sigma addressed it when it introduced the 18–200mm f/3.5–6.3 during March 2007. It included the company’s Optical Stabilization (OS) technology for Canon, Nikon and its own SD range of DSLRs.

5. The Sigma lens’ minimum focus distance of 1.48 feet (0.45m) is the same as the Canon super-zoom and better than the Nikon (1.6 feet/0.5m) and Tamron (1.6 feet /0.49m). This helps to reinforce Sigma’s advantage of an all-purpose lens with at least one very competitive feature for much less money.

6. You can easily recognize the quality of the Sigma 18–200’s construction, as it feels substantial in your hands and the controls are within easy reach. The mount is metal and Sigma’s has used a decent grade of plastic parts for the barrel.

7. As typical with other super-zooms, a “double-trombone” configuration extends the front lens group during zooming; however, the rear group also moves internally by the same means.

8. The Sigma lens comes with a zoom lock conveniently located at the top of barrel, which essentially eliminates any zoom creep. Other controls, such as AF and OS switches, are also readily accessible and the zoom ring and very wide manual focus ring are positioned for a natural and unencumbered reach.

9.  Another advantage of the Sigma 18–200mm lens is that it creates an excellent balance with larger DSLRS, such as the Nikon D300. Although the balance point moves forward when paired with smaller bodies. This feature of the Sigma lens is right in line with the Tamron and Nikon super-zooms.

10. The auto-focus system on the Sigma lens provides two options: the Nikon HSM (HyperSonic Motor) technology and the customary micro-motor for Canon and Sigma. During AF, the focus ring turns and you’re unable to override the manual AF. This isn’t much of a disadvantage, in reality, as only the comparable Nikon lens has this capability and it’s the most expensive of these lenses.

Auto-focus speed and noise were well above average, but not to the Nikon standard, but, again, you’ll spend more than twice as much for better AF.

11. The Sigma 18–200 may not be the sharpest lens among its competitive group; however, for its price, the soft corners at most settings and the very acceptable chromatic aberration and distortion achieve a good balance for this lens.

12. For many photographers, the Sigma’s price advantage will be the primary consideration, as they are less critical of sharpness issues and more concerned with finding a lens they can afford and will serve them well during virtually every shooting situation. Pros aren’t typically attracted to super-zoom lenses, so neither the Sigma nor the Tamron, Canon or Nikon will be high on their lists. It’s the casual photographer, shooting at home or everyday life events and vacations and traveling that will want to put the Sigma 18–200mm f/3.5–6.3 super-zoom lens at the top of their list.