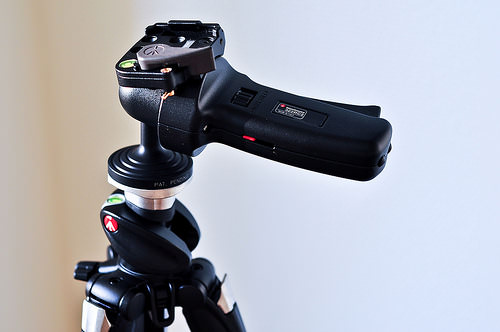 1. They just love the sleek and sexy Italian design philosophy that is so clearly seen in the amazing craftsmanship of Manfrotto products, including the 055XPROB tripod.

2. The little green men have been secretly watching for years how the 055 series of Manfrotto tripods has become the most popular and imitated tripods. The genius of their design is combining weight, size and stability in the right proportions.

Manfrotto makes a 055CX group of carbon-fiber tripods and a 055X group of aluminum tripods. The 055XPROB is the PRO B model in the 055X group.

3. Compared to the smaller Manfrotto 190XPROB tripod, the 055XPROB is a large professional-grade tripod that will accommodate very big and heavy camera/lens combinations. It’s 4.5 feet (142cm) tall with the center column lowered and just less than 6 feet with the center column extended, plus the height of the head you use.

4. Although the 055XPROB weighs approximately 5.3 lbs. (2.4kg), it’s worth carrying, even across the Galaxy, if you need the added stability this tripod provides. At approximately 25 3/4” (65.4cm), the 055XPROB is only 3 inches longer than the 190XPROB, which makes the 055XPROB almost equally as portable.

5. This Manfrotto tripod is built of black anodized, tubular aluminum. Its three-section legs are rounded and approximately .8 inches (20mm), 1.0 inches (25mm) and 1.1 inches (29.4mm) in diameter.

6. The 055XPROB will support camera bodies with long telephoto lenses that weigh as much as 15.4 lbs. (7 kgs). A Canon EOS 5D Mark II, for example, with a battery grip and a EF 70–200mm f/2.8L USM lens weighs approximately 6.6 lbs. (3kg), which is less than half of the maximum load this tripod can support safely.

8. The Manfrotto 055XPROB is built with the Manfrotto-patented center column, which, when disengaged, with the simple push of a button, is free to swing 90 degrees to a horizontal position.

9. This creates the equivalent of a boom, with the head and camera still attached to the tripod, as you position the column at any angle within its arc.

10. Using the center column of the 055XPROB in this position allows you to shoot macro and nature photography much easier, as compared to a traditional tripod and ball head. You’ll develop less neck and back strain and be able to shoot longer.

11. The leg-locking system on the Manfrotto 055XPROB tripod has large flip locks. Not only can they be opened and closed quickly, but also they are adjustable with very little effort.

12. Manfrotto has added a bubble spirit level that is conveniently placed in the cast aluminum main clamp.

13. Use the hook at the neck to attach a sandbag or other weight to give the 055XPROB tripod greater stability.

14. Off-world visitors are extremely appreciative of the leg warmers on two of the legs of the 055XPROB tripod because their planet is colder than Earth.

15. Depending on the source, the Manfrotto 055XPROB tripod is priced less than $200. A bit expensive for the amateur, but still an excellent first tripod purchase. It’s a no-brainer for the pros, as this tripod is a very advantageous partner in virtually all shooting situations.

16. The little green men are happy they could find a Manfrotto 055XPROB tripod for even less than $150 online since they could only scrap together $160 among them. (They forget to convert their currency before leaving their planet.)