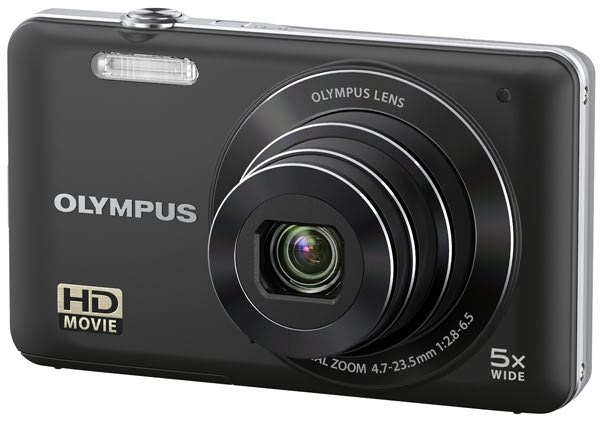 1. The Olympus VG-120 is a member of the V-Series of Olympus cameras that are built for easy and fun photography. The VG-120 offers a 5x optical zoom, 27mm wide-angle lens; 720p HD movie mode; and a 3-inch LCD. Add creativity to your picture taking with the VG-120’s Magic Art filters. Pop Art, Pin Hole, Drawing, Fish Eye, Soft Focus, Punk, Watercolor and Sparkle will dazzle your family and friends and attract more people to the front of your camera. The Olympus VG-120 retails for $139.99.

2. The Olympus Stylus Tough-8010 is one of the company’s Tough line of adventure cameras. It’s waterproof to 33 feet, shockproof to drops of 6.6 feet, freezeproof to 14°F/-10°C and crushproof against as much as 220 pounds of pressure. It’s the camera to take with you on the trail, up the rock wall, down the rapids and to the top of slope. As you grab more adventure with one hand, you can shoot 720p HD video with one touch of the other hand. The Olympus Stylus Tough-8010 retails for $379.99.

3. The Olympus SZ-30MR camera may only have a 24x optical zoom lens, compared to the competition’s 30x, 35x, and even 36x zoom ranges, but it’s the first camera of its kind that fits in a trouser pocket. The SZ-30MR’s lens retracts completely into the camera body. The camera also includes a 16-megapixel sensor, image stabilization, 1080p Full-HD movies with stereo sound, a 3-inch LCD screen and a multi-record (MR) mode, so two still images or two high-definition video segments can be captured simultaneously. The Olympus SZ-30MR retails for $399.99.

4. The Olympus SP-610UZ camera is for the casual outdoors lover or sports enthusiast. Its 22x ultra-zoom lens brings the action close without you having to be in the middle of it. You can enhance your outdoors and action images with the SP-610UZ’s 3D feature that captures two pictures and combines them into one image for a dramatic effect when viewed on a 3D device. The SP-610UZ has the same Magic Art filters as the VG-120 and also shoots 720p HD video with the touch of a single button. You can also upload or email your photos directly from the SP-610UZ with an optional Eye-Fi™ card. The Olympus SP-610UZ retails for $199.99.

5. The Olympus XZ-1 is the first camera in the company’s X Series, which combines point-and-shoot ease with many of a DSLR’s features and image quality. One of these high-end capabilities is a 1/1.63-inch, 10-megapixel sensor that doubles the typical light-reception area of most compact camera’s sensors. The iZuiko f/1.8–2.5, 6mm–24mm lens is the same as 28mm–112mm in the 35mm format. It contributes much to the picture quality of the XZ-1, since you can shoot at fast shutter speeds in low-light situations. Shoot 720p HD video at 30fps and switch from still photography to video with a simple push of the record button. The Olympus XZ-1 retails for $499.99.

6. The Olympus PEN Lite E-PL3 camera is for hobbyists and enthusiasts who are ready to advance from a compact camera to their first camera with a large sensor. The E-PL3 has an updated 12-megapixel Live MOS sensor; 460,000-dot, tilting LCD screen (16:9 aspect ratio); Dual-core TruePic VI processor; 120Hz “Fast AF” focus system; 1080i60 movies in AVCHD format; built-in stereo microphones; and a clip-on flash, plus many other capabilities. The PEN Lite E-PL3 looks more like the Olympus XZ-1, giving it some of the design styling of a DSLR. The Olympus PEN Lite E-PL3 retails for $699.99.

7. The Olympus E-620 camera is another foray by Olympus into the entry-level DSLR market, where it has already had much success. Weighing just a bit more than 16 ounces, Olympus touts the E-620 has the world’s smallest and lightest DSLR with in-body, optical image stabilization. This camera is also clearly showing its muscles with a 12.3-megapixel, high-speed live MOS sensor, a 2.7-inch fully articulated LCD screen, various “art” modes and four different aspect ratios. Image quality is another test of a DSLR’s appeal and the E-620 produces excellent photos that are as good as those from any similar camera, when compared to as much as ISO 800. The Olympus E-620 retails for $699.99.

8. With its E-5 DSLR, Olympus is attempting both to compete with the Nikon D300s and Canon EOS 7D and to attract current Olympus E-3 owners to buy this upgraded version of a camera many of them have grown to love. An important feature upgrade is the E-5’s 12-megapixel sensor versus the E-3’s 10MP sensor. Other features of the E-5 include the TruePic V+ processor; a 3-inch, 921,000 vari-angle LCD screen; Fast Sensor AF (including Face Detection); 720p movie mode (AVI M-JPEG); a top ISO sensitivity of 6,400; and a redesigned color-coded menu system. The Olympus E-5 retails for $1,699.99.