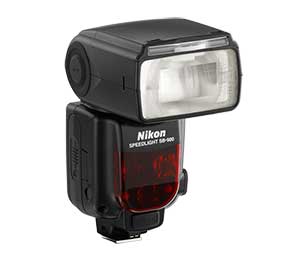 With its introduction during 2008, the Nikon SB-900 AF Speedlight, with Nikon’s Precision i-TTL Flash Control, became the first choice of many serious and professional photographers—and it has been a winner ever since.

One benefit of this coverage, at 200mm, is that you can closely focus the light on a small part of the frame when the SB-900 is used as an off-camera light source, for example, for a hard-light, multi-flash portrait outdoors. Why use a snoot or grid to block the useless wide part of the beam, when you can zoom closer and achieve more flexibility with an extra f-stop. You’ll manage the ambient light level better, so you can modify the ambient tones.

Nikon deserves major kudos for designing the SB-900 with such an advanced refractor/reflector system. Not only can you control the external character of the light beam, as explained in #2 above, but also you can do the same with its internal character. By adjusting the tube, you’ll have three primary choices: a typical beam shape, a bit more concentrated shape or a very uniform spread of light.

With the use of the SB-900’s manual switch and wheel dial, you’ll spend less time searching the CLS menus on your master flash. If you use multiple-flash setups, then you may want one of them to be a SB-900, so it can serve as a master. The SU-mode triggers an excellent built-in and manually powered slave.

The SB-900 recycles in two seconds—and without a battery pack—although the optional SD-9 pack will reduce the recycling time even farther to one second at full power. The SB-900’s very fast recycling time may be another good reason to buy at least one if you shoot often with multiple flashes.

The high-tech CLS interface is certainly a major benefit of shooting with the Nikon SB-900, but the company was also smart enough to retain the PC jack for traditional synching.

Not only does the SB-900 Flash bounce at 90 degrees above the plane and seven degrees below, but also the head rotates a complete 360 degrees. The primary benefit of this capability is that you have the freedom to mount a remote flash, so the window faces the master light source.

Forget about all those jerry-rigged methods to secure pieces of gel to the flash head. Plus, the dome diffuser can be used in conjunction with the gel holder.

The SB-900 has the brains to disable itself if the temperature reaches critical mass. Check the thermometer-like display on the rear of the unit to know when you are approaching the overheating limit.

Nikon flashes are known for their wireless flash control; and with the SB-900’s wireless commander mode, you can create a multiple lighting array with the Speedlight in the master’s chair. From there, you’ll control as many as three remote Speedlight groups and an unlimited number of compatible Speedlights.

If your type of digital photography (especially if you’re generating revenue from it) requires serious and professional-grade lighting, then the Nikon SB-900 AF Speedlight may be your ultimate choice. Even with its $450 to $500 price tag, the SB-900 is an excellent value and competes head-to-head with its few competitors.