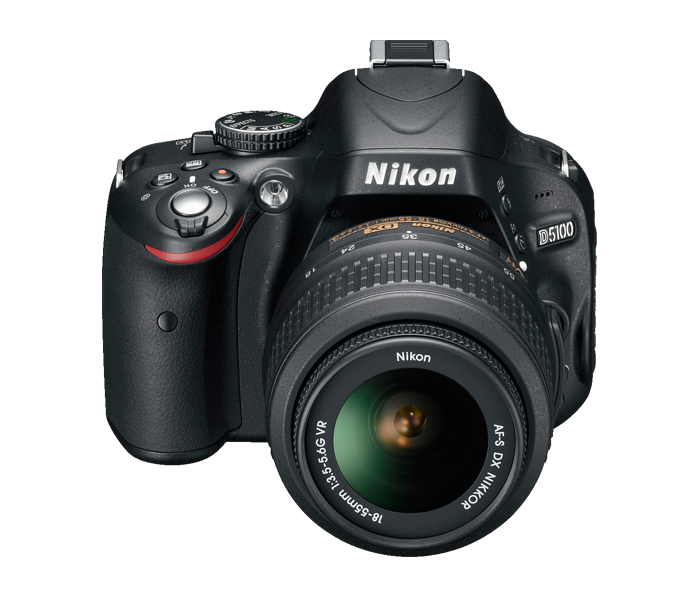 Enjoying and excelling at digital photography has much to do with finding a camera that matches the kind of photographer you are, the kind of pictures you like to take (and plan on taking) and, of course, your wallet. Often, consumers gravitate to a middle choice, so they can have more features and quality than the basic product, but won’t be paying for the high-end choice. That is one of the achievements of the Nikon D5100 DSLR camera (MSRP $900). It’s the middle piece in Nikon’s “redesign” of its selection of non-professional DSLRs, with the D3100 (MSRP $700) at the basic end and the D7000 (MSRP $1,600) at the high end.

The D5100 provides some obvious improvements to its early incarnation, the D5000. The D5100 has been designed to complement the other cameras in the line (D3100 and D7000), and is less bulky than the D5000. It is only 90% of the size and weight of the D5000. Even though the D5100 is smaller and lighter, the redesigned grip feels very comfortable in the hand. What has many digital photography enthusiasts’ attention is the side-hinged LCD screen; a definite step forward from the D5000’s unwieldy bottom-hinged LCD. Nikon has moved the complete button layout to the right to make room for the side-hinged LCD screen. Now, it’s easier to access the camera’s functions with the right hand.

The D5100 shares some features with its big brother, the D7000; but, to keep it in that middle price point, other features are basic and non-existent. For example, the D5100’s CMOS sensor is 16.2 MP, similar to the D7000; however, there is no wireless flash control, magnesium alloy build or 39-point AF system. The D7000 also includes the better 18–105 f/3.5–5.6G ED AF-S VR lens, a larger and brighter viewfinder, built-in focus motor, weatherproof sealing and several other upgrades. Despite those distinctions, the non-professional won’t notice much difference in the image quality. To maintain the D5100’s price point, however, there is a single control dial, pentamirror viewfinder and no built-in auto-focus motor.

By no means is the Nikon D5100 perfect. Of major concern is the location of the live view toggle and movie record button. Many will find that the Live View layout on the back of the D3100 and D7000 to be greatly superior. The Live View dial and record button are combined in a single switch that is much more conveniently located. With a slight movement of the thumb, the live view toggles very easily. On the D5100, however, you must move your entire hand to toggle live view and you must use your shutter finger to start record. This simply doesn’t work very well, whether you’re controlling the framing of your shot or taking photos while in movie mode.

The Nikon D5100 DSLR compares very favorably to its competition: the Canon Rebel T3i/EOS 600D and the Panasonic Lumix DMC-G2. The Panasonic has a smaller sensor and an electronic finder instead of an optical viewfinder. The Panasonic moves slightly ahead because of its ergonomics, the most physical controls and a touch-sensitive LCD screen. Despite those advantages, the D5100 and Rebel T3i are the prime choices.

For even more in-depth information about the Nikon D5100 DSLR camera, read Part 2 of this PhotographyTalk.com article. (Coming Soon)