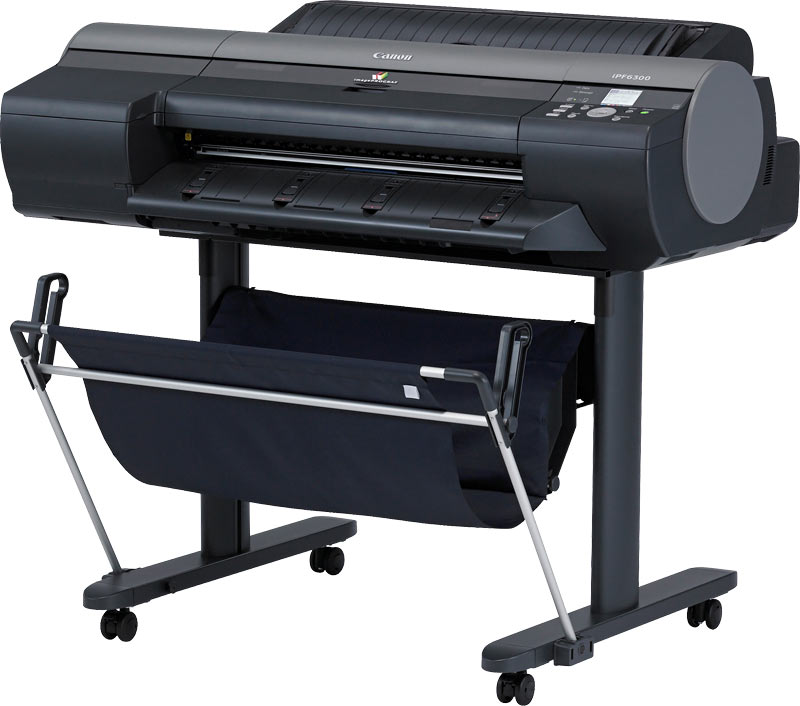 1. The Canon iPF6300 is one of the company’s ImagePROGRAF printers, with a 24-inch paper capacity, that has been significantly upgraded from the earlier 6100 model. They may look the same, but the improvements make the 6300 more competitive with its HP and Epson counterparts, such as the Epson Stylus Pro 7700, 7800 and 7880 and the HP DesignJet T790ps ePrinter and DesignJet Z3200.

2. Canon has given the iPF6300 a 12-color pigment ink set that has shown to provide approximately 20% more gamut than the 6100. Among other benefits of an increase in color gamut, prints from the Canon have markedly better scratch resistance, with which many users have found fault on many inkjet prints.

4. Users will also appreciate the improved design and construction of the stand, providing added rigidity and stability.

5. You can’t realize the value of a high quality printer if it isn’t easy to use. Canon printers have been at a disadvantage when it comes to user interface, at least until it stepped forward to reverse that trend in the 6300 (and all its x330 series). The button layout and help screens on the LCD are greatly improved, although still not quite as good as the Epson and HP equivalents.

6. The Canon iPF6300 printer is a printing-interface winner, however. Printing settings can be managed from a single dialog box once the ImagePROGRAPH Print Plug-in for Photoshop is added.

7. Users will also appreciate the iPF6300’s layout utility, allowing them to set up a single sheet with duplicated images of the same photo. The utility has gives them the versatility to resize and place the images on the sheet automatically.

8. Canon has not only made a big leap forward in the range of color (20% more gamut), but also has complemented that gamut improvement with truly excellent print quality that rivals other printers at its price point and above. Where you’ll see the iPF6300’s incredible print quality is in the blues and deeper purples that appear more saturated as well as better details in the intense shadows. This is especially meaningful for product and landscape photographers.

9. Canon imagePROGRAF printers have a solid reputation for fast print times. Third-party tests reveal that the iPF6300 is the fastest of all its competitors, just slightly ahead of Epson’s x900 models.

10. With the improvement in printing interface, Canon has finally made it easier for users to customize the paper list. First, the list will only show the paper types in use and, second, the Media Configuration Tool adds a paper to the list. Work through the 10-minute setup and make some test prints and you’ll see the new paper in the Print dialog box.

11. Another nifty, little addition to the Canon iPF6300 is a Light Source Measure Tool, which will be a major help for photographers making prints for gallery display. With this tool, you can customize your prints’ white point in conjunction with one of the i1 spectrophotometers.

12. With so many upgrades, this Canon printer has jumped ahead of the competition, especially considering it is one of the lower-priced printers in its competitive group. It retails for $3,695, but can be found for less than $3,000 from many sources. Print speed, a much larger color gamut and a major improvement to the user and printing interface make the Canon iPF6300 a definite value winner.