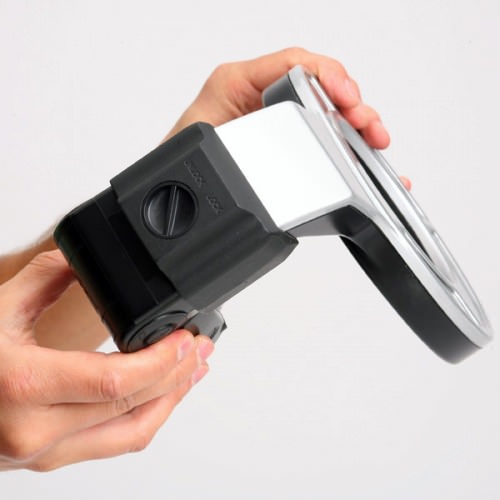 1. ExpoImaging has cleverly designed the Ray Flash Ring Flash Adapter, so it attaches quite easily to a hot-shoe mounted flash, and then delivers the light it generates to the ring flash. The Ray Flash does this just as well as more costly ring flash models that require juice from a power pack or an electric wall outlet.

2. The Ray Flash is the perfect complement for fashion, wedding, portrait and macro photographers and photojournalists, giving their work a subtle, but significant, difference that clients may not consciously recognize, but they know their images look better.

Some photographers report, however, that the Ray Flash will work on certain Sony, Metz, Olympus, Sigma and LumoPro units; so it is not only “officially” adaptable, but also “unofficially.”

5. The outer and inner dimensions are the same for all 10 models at 6.89 inches and 4.06 inches, respectively.

6. Many photographers appreciate how easy it is to attach the Ray Flash Ring Flash Adapter. It slides over the head of the appropriate flash unit and is secured with the lock screen on the top. The Ray Flash hangs from the flash, so it requires no hands-on operations.

7. Many Ray Flash devotees benefit from a very easy shooting configuration. They use manual exposure settings on the camera, which controls the ambient light, and select TTL on the flash. The Ray Flash never hampers TTL functionality.

8. Ray Flash users have discovered that it reduces flash output by one stop of light, but many of its competitors do so too. The difference is that the Ray Flash also delivers more range of light. Continuous testing by ExpoImaging and reports from photographers in the field confirm that light from a Ray Flash from 10 feet will be evenly cast in an arc approximately 8.5 feet wide.

9. Additional third-party testing has shown that the smaller Ray Flash actually beats ring adapters, such as the Orbis model, which has a larger surface area, in terms of light output. This is a definite advantage when shooting at longer focal lengths and a greater distance from a subject.

10. In addition, Ray Flash Ring Flash Adapters are designed with a series of internal light-shapers, which not only soften the light, but also create a pleasing three-dimensional shadow behind the subject.

11. When comparing the ExpoImaging Ray Flash Ring Flash Adapter to its competition, it runs neck-and-neck with the Orbis Ring Flash. Each have advantages that photographers wish the other had, but what might put the Ray Flash slightly ahead is that the Orbis doesn’t deliver as much flash output, approximately two stops less.

With its plastic-and-cardboard construction, it’s difficult to compare the DIY Ring Flash to the durability and long life ExpoImaging builds into its Ray Flash. Even though the DIY product is only $24.95, it typically only lasts approximately a year before it has to be replaced. Plus, the flimsy construction of the DIY ring flash means it doesn’t attach to the flash head very well.

The GoPro Ring Flash does cost less, but there is much about its performance that is questionable. Many third-party tests report that it is the most difficult ring flash adapter to attach to a flash unit; and it also projects less light like the Orbis, which means you must stand closer to your subject.

12. When you consider the build quality, ease of mounting and ease of use, more compact design and greater light efficiency, the Ray Flash Ring Flash Adapter from ExpoImaging is the best $200 you can spend for this kind of lighting product.