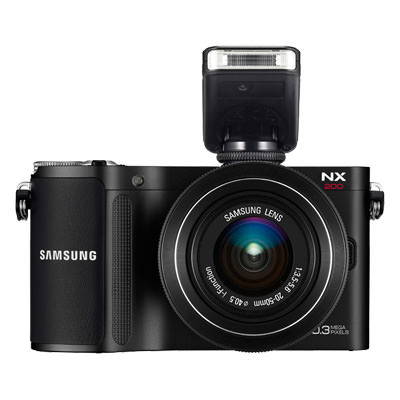 1.    Samsung has decided to put some muscle behind its new NX200 camera, so it will appeal to amateurs ready to upgrade from a compact as well as more experienced photographers looking for a second camera.

2.    The Samsung NX200 sports a new body design that the company calls “Retro Modern.” The strategy behind the camera’s look is to give consumers an alternative to Sony’s NEX models, but designing it along the same lines as those cameras.

3.    Even though it’s smaller than the NX100, the NX200 looks and is, in reality, more substantial, with its black metal body and smoothly painted exterior surface. The designers rounded the right side of the body even more than the NX100, creating more of a natural curve for your fingers to grip it securely.

4.    A clear giant leap forward for the Samsung NX200 is its upgrade from Samsung’s “traditional” 14.6-megapixel sensor to a meaty 20.3-megapixel APS-C CMOS sensor.

It’s not just the much larger size of the new sensor that makes it such a major advancement. The architecture has been totally revamped with integrated analogue-to-digital conversion, with the purpose of suppressing noise—and attracting potential Sony NEX buyers, as Sony has included this architectural feature on its sensor for a number of years.

5.    The new sensor in the Samsung NX200 doesn’t stand alone, however. The company has taken more leaps forward with improvements to the components positioned in front of the sensor. These include the color filter array, micro-lenses, optical low-pass (anti-aliasing) filter and moiré-suppression technology.

6.    What could make the Samsung NX200 a very appealing choice for a wide range of photographers is its upgraded user interface. It’s simple enough for beginners with only point-and-shoot experience as well as serving more experienced photographers who prefer to use the PASM modes.

Samsung’s solution is the Smart Panel, a clear, intuitive screen from which the photographer is able to view and select all the camera settings with the four-way controller.

Once you’ve accessed a setting, it can be quickly adjusted by scrolling the top dial. You can view the setting’s options on a screen with just that setting’s information with a simple press of “OK”.

8.    Video is another major leap forward. The NX200’s beefy 20.3-megapixel sensor now powers 1080p/30fps video in stereo. In addition, the user has more exposure flexibility in the movie mode, as he or she can select the new M and S exposure modes.

9.    The Samsung NX200 shoots at a rather remarkable 7fps in continuous shooting mode.

10.Many photographers may also be surprised to see how far Samsung has advanced with its series of lenses for the NX200 and all its mirror-less cameras. With five new lenses for 2011, Samsung competes strongly with similar cameras at the same relative price point.

11.For approximately $899 (from B&H Photo Video), the Samsung NX200 certainly costs more than the $550 to $700 range of Sony’s NEX line; however, the Samsung packs more of a punch, especially its sensor. The NX200 is definitely a worthy upgrade from the NX100 and other Samsung models, and should be seriously considered before buying a similar camera.