12 Fantastic Features of the Sony Alpha a55 DSLR Camera 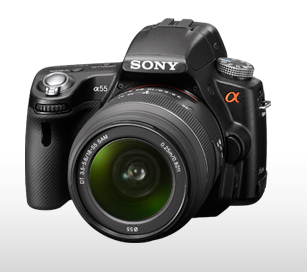 1. Introduced to the digital photography world during September 2010, the Sony Alpha a55 DSLR has significantly advanced picture taking because of its Translucent Mirror Technology™. Sony describes this technology as using a fixed, translucent mirror that “splits” the optical pathway between the main image sensor and a separate phase-detection, auto-focus sensor. Sony A77 camera also has translucent mirror technology along with electronic view finder which makes it better than A55.

2. With its newer electronic viewfinder (EVF) technology, the Alpha a55 is an excellent choice for action photography. Cameras with older EVFs have always been a challenge for photographers because their cameras were unable to freeze any kind of action, especially sports. The photographer’s view of the image was delayed by a fraction of a second, which was all the time needed to miss a great action picture. In addition, it was difficult to see focus with those older EVF cameras because the LCD viewfinders are of low resolution and the auto-focus is too slow for action shots. The photographer must focus with the delayed, two-dimensional image from the sensor.

The Alpha a55 doesn’t require this older mirroring system because its electronic viewfinder allows you to see the image as the sensor does, and almost simultaneously.

3. Now that the a55’s improved EVF will allow you to focus on your subject more precisely, you can record all the accurate details with the camera’s 16.2-megapixel APS-C sensor and Sony Exmor™ APS HD CMOS technology. Images are sharp and clear, even in low light, and produce virtually no sensor noise.

4. The Translucent Mirror Technology also boosts the Sony Alpha a55’s continuous shooting capability. Not only can you capture images with complete 16.2MP resolution at as many as 10fps, but also auto-focus and auto-exposure continue to operate.

5. The many new technologies in the Alpha a55 also significantly enhance the camera’s video capabilities. Shooting at 1080/60i Full HD, the a55 surpasses most DSLRs with an image quality that matches HDTV programming. Recording formats include 1080/60i AVCHD™ and MP4 for 1080/30p HD and 480/30p.

6. With the Alpha a55’s exceptional sensor technology, you can shoot professional-quality video, with very high resolution and blurred backgrounds that give your movies amazing depth.

7. Shooting video with the Sony Alpha a55 is further enhanced with an auto-focus system designed specifically for full HD. You’ll be able to track and record subjects in motion with the same Phase Detection speed and accuracy for still images. It’s all part of why Sony’s Translucent Mirror Technology makes the a55 so special.

8. Shoot in a low light without a flash and produce outstanding results with another interesting feature of the Sony Alpha a55 DSLR camera. It records six separate images in less than a second and then transforms them into a single image. The increased noise typical of a single image in low light is reduced two ISO stops, creating clean photos with outstanding details.

9. With the Sony a55, you can easily step into the world of HDR, or high-definition range photography. It takes less than a second for the camera to capture three separate images, which you can then combine into one HDR photo with excellent highlights, strong mid-tones and amazing details in the shadows.

10. The Sony Alpha a55 has even more special shooting capabilities, such as the Sweep Panorama™ mode. Create grand landscape panoramas by simply panning the camera vertically or horizontally, as you push the shutter release. The camera records a series of images that it then weaves into a single panorama as large as 23MP.

11. Sony has filled the Alpha a55 with many other features that make this a highly desirable camera at this price point. Face and Smile Detection, creative finishing styles settings and scene selection modes are just a few. Find them all at http://store.sony.com/webapp/wcs/stores/servlet/ProductDisplay?catalogId=10551&storeId=10151&langId=-1&productId=8198552921666254669#features.