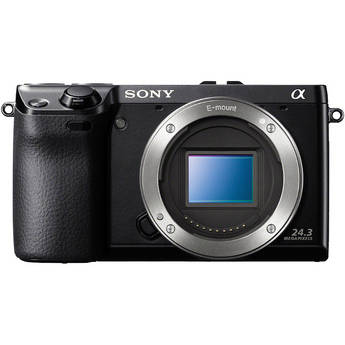 1. Sony may have never designed the NEX-7 if serious photographers hadn’t taken a liking to its NEX-3 and NEX-5 mirror-less interchangeable lens cameras. Sony brought these small cameras with APS-C sensors to the marketplace during May 2010 to attract point-and-shoot camera owners who were ready to advance to a better camera, but not a full-fledged DSLR. Sony was surprised when more serious photographers, hobbyists and enthusiasts, also bought the NEX-3 and NEX-5. Sony has been highly successful because it observes the markets for its products carefully and understands how to take advantage of the trends. So here it is "The Sony Nex 7" for the professional photographers.

2. This led to introducing the NEX-7 model, with a long list of features that have surprised enthusiast photographers, who also seem to want DSLR-like capabilities in a small package. The combination of a lightweight camera, excellent picture quality and a line of interchangeable Sony lenses or a camera body that accepts other lenses is one that also appeals to the serious photographer.

3. Even the accomplished photographer is a bit awestruck by the NEX-7’s 24.3-megapixel APS-C CMOS sensor. It’s one of the largest in any camera; and Sony uses it in its top-of-the-line Alpha SLT-A77, and A65. Not only does the sensor deliver outstanding still images, but also true 1080p60 video.

4. The NEX-7 also has the A77’s 2.4M-dot OLED electronic viewfinder. It has impressed many third-party testers so much that they declared it to have the highest resolution in any electronic viewfinder they’ve tested. The EVF is also equipped with an eye sensor, so the view automatically switches between it and the rear LCD.

Despite the relatively compact size of the NEX-7, the OLED EVF, when combined with the high-resolution sensor, has a 100% field of view. Its dimensions are just a bit smaller than a full-frame DSLR, but larger than many of its direct competitors.

5. Another definite surprise is that the Sony NEX-7 is the first interchangeable-lens digital camera with separate exterior control dials for each member of the exposure “trinity”: aperture, shutter speed and ISO.

6. Sure to cause double takes from many serious photographers is the NEX-7’s rather large handgrip that outclasses all of the competition, considering that some comparable cameras have no dedicated handgrip. Equally welcomed is the NEX-7’s metal-shell body, which is a clear sign it is built for the sometime rugged use of the serious enthusiast or even semi-pro photographer.

7. Although not a first in digital cameras, the NEX-7’s new shutter technology makes it more like a high-end, instead of an entry-level, DSLR. The shutter has an optional electronic first curtain, so exposure of an image begins without the need for a full recycling of the shutter. According to the Sony specifications, shutter lag is now reduced by a factor of five: 100ms to 20ms.

8. Many serious photographers will be saying, “How can Sony put two highly desirable continuous shooting modes in this small, DSLR-like camera?” The “Continuous” mode operates at a number of reasonable speeds, even allowing for live view between frames. The new electronic front curtain shutter technology is particularly useful for this function. The second mode, or “Speed Priority Continuous” is the real surprise, with a 10 frames-per-second performance.

The camera’s buffer capabilities enhance continuous shooting even further. It’s unlikely you’ll ever experience a locking situation because the camera switches to a slower shooting speed when the buffer becomes full. The numbers don’t lie: The Sony NEX-7’s continuous-shooting operation is clearly superior to other cameras of this type.

9. As mentioned above, the Sony NEX-7’s extremely large sensor makes AVCHD Progressive video recording possible in 1080p60 HD. Plus, audio is captured with a built-in stereo microphone. The surprising feature of the camera’s video capabilities is that your exposure settings are not defaulted to full auto when you start to record, which occurs in many cameras. Better yet, you can adjust the exposure settings during recording, although this flexibility is determined by the mode you’ve chosen. Recording also doesn’t inhibit you from selecting a different active focus area.

10. Considering all the pro-level features packed into the Sony NEX-7 (and this PhotographyTalk.com article only scratches the surface), it is surprisingly priced at $1,199.99 for the body only from B&H Photo Video. Add the E 18–55mm f/3.5–5.6 kit lens, a version of which Sony created just for this camera, and the price is still an outstanding value at $1,399.99.