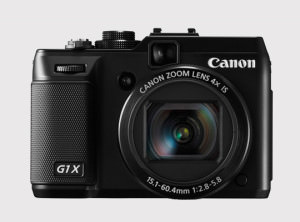 .   With the interruption to Canon’s late-2011 equipment introductions because of the earthquake and tsunami in Japan, the company is wasting no time bringing new product to the market in the New Year. January 9th, saw the announcement of the new PowerShot G1 X that Canon states is aimed at serious enthusiasts as a prime camera and professional photographers as an adjunct to their DSLR. Even with its many features and capabilities similar to DSLRs, the G1 X is small and portable like a compact, weighing just 19.0 oz. (534g), with the battery and memory card.

2.   The advancement in sensor technology for a compact camera is likely to grab much of the attention of photographers and the headlines in the media. This is Canon’s first compact camera with a large, 4:3 aspect ratio, 14.3-megapixel CMOS sensor. It rivals some APS-C sensors, in terms of sensor height at 1.5 inches (18.7mm). Not only does this new sensor have the same pixel size and organization as the EOS Rebel T3i, but also overwhelms the popular PowerShot G12’s sensor, with approximately 6.3 times more surface area.

Canon expects photographers to recognize quickly that the PowerShot G1 X can deliver virtually professional quality images. With this camera, photographers at many skills levels will be able to utilize depth of field more effectively and creatively, record pro-like contrast and produce large prints with clarity unavailable from other compacts.

3.   Another pro-like deliverable from the PowerShot G1 X is image integrity in low-light situations. Equipped with Canon’s DIGIC 5 image processor and an ISO sensitivity range of 100 to 12,800 (a first for a Canon compact), the G1 X captures sharp images with low noise, even when the ambient light is weak.

4.   The PowerShot G1 X comes with a 4x optical zoom lens, with a 35mm-format equivalency of 28–112mm and ultra-high, refractive index aspherical glass elements. The lens adds to the camera’s compact size and portability when it’s drawn into the body. The lens also features an optical Image Stabilization (IS) system, permitting the capture of compositions in low light at slower shutter speeds with 4 stops of difference. Narrower depth of field is possible with the 3-stop Neutral Density filter that is included.

5.   Equally impressive is the G1 X’s 3.0-inch, vari-angle PureColor II VA LCD screen with 920,000 dots. Photographers benefit from an incredible variety of shooting angles as well as a high-resolution view that improves composing and reviewing of images. The optical viewfinder includes a diopter adjuster for even more shooting versatility.

6.   Canon knew serious and professional photographers demand Full-HD video capabilities too. The PowerShot G1 X shoots 1080p Full-HD at 24fps, with stereo sound. In addition, the zoom feature of the lens can be activated during video recording.

7.   The photographers Canon expects to purchase the PowerShot G1 X will also insist on pro-like continuous shooting. This camera is capable of bursts of six full-resolution images at 4.5fps. For even longer segments of action photos, the G1 X will also operate continuously at 1.9fps in JPEG format to the volume of the memory card.

8.   Other compelling functions of the G1 X are the manual pop-up flash, a hotshoe that accepts separate Canon Speedlite flash units and various sophisticated shooting modes, such High Dynamic Range (HDR) and Handheld Night Scene. Select this mode when confronted with a very dark scene and no tripod. It records a series of shots quickly, and then chooses the best image data to create the best photo possible.