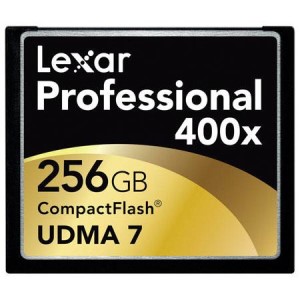 1.   As the digital photography world reacts to every rumor and kernel of information about the major, new products to be introduced during 2012, the small, even tiny, new products shouldn’t be overlooked. One of the most exciting is Lexar’s Professional 400x CompactFlash (CF) card, which will be released in three sizes: 64GB, 128GB and the first-ever 256GB memory card.

2.   The huge capacity of these cards will provide serious and professional photographers and videographers with greater freedom to concentrate on shooting instead of changing cards so often.

3.   Rated at 400x speed and a minimum guaranteed transfer speed of 60MB per second, these new Lexar CompactFlash cards can accommodate a much larger number of high-resolution images and 1080p full-HD video segments. The cards will also make it easier to shoot in faster bursts during a longer period of time. Industrial and commercial applications will also benefit from the use of Lexar Professional 400x CompactFlash cards, reducing the need for the high-capacity hard drives on which they’ve relied.

4.   Nothing aggravates a professional photographer or videographer more than waiting for images to transfer from the camera to the computer. Now, they can use a UDMA 7-compatible device, such as the Lexar Professional USB 3.0 Dual-Slot Reader, to eliminate much of this downtime, so more of it can be spent creating, and managing digital workflow faster and more efficiently.

5.   Although video was not initially an important function of a DSLR for many professionals, it has grown in stature as more of them are creating multi-media presentations that combine stills and video. The new Lexar CompactFlash cards enhance this creative opportunity, since pros and serious amateurs alike can now use their DSLRs as multi-functioning artistic tools.

6.   Another professional requirement of CF cards is dependability and compatibility with the entire range of digital devices. Lexar spent considerable time testing its Professional 400x CompactFlash card, so they would perform under tough pro conditions and be compatible with more than 800 digital products pros may use.

7.   Lexar is releasing the Professional 400x CF card with a free copy of the latest version of the company’s Image Rescue software (a $33.99 value). In many cases, it will salvage lost or deleted photos and videos from erased or corrupted cards.

8.   Lexar is so confident in the professional quality of the 400x CF card that each includes a limited lifetime warranty. Plus, purchasers receive free technical support.

9.   According to the Lexar Web site, the 64GB ($299.99 MSRP) and 128GB ($469.99) Professional 400x CF cards will be available during February 2012. A select group of commercial and industrial users are helping Lexar continue testing of the 256GB size, with a projected release to all customers during the first six months of 2012.

Feel free to visit our lighting and flash forum