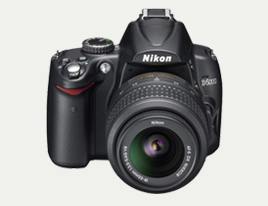 1.   With entry-level DSLR camera buyers as the largest segment of the market, it isn’t surprising that Nikon would offer a camera that specifically appeals to a sub-category of all those buyers. That is the first favor it did for digital photographers advancing from a compact, or point-and-shoot, camera to their first DSLR. There are certainly less costly entry-level models, but some aspiring photographers will want to take a bigger step, in terms of camera capabilities, and be willing to pay extra for them.

2.   When introduced during 2009, the Nikon D5000 surprised many by having the same 12.9-megapixel APS-C sensor and Nikon EXPEED image processor as the Nikon D90, which is two steps above the D5000 on the Nikon family tree.

3.   Nikon made sure the D5000 wasn’t as large as the D90 (that might have been too much of a size change for previous compact users), but it is somewhat larger than many entry-level DSLRs. This is a favorable design decision whether you have bigger-than-average hands or are simply ready for more true DSLR features that require the extra space to accommodate them.

4.   The larger body creates a more substantial handgrip, so your fingers are less likely to interfere with the operation of the lens. Ergonomically, the camera provides just the right distance between your thumb and forefinger and placement on the exterior to reach controls and buttons easily.

5.   Nikon also knew that the slightly advanced DSLR beginners would respond positively to the D5000’s tilt-and-swivel LCD, which also requires a bit larger body. Not only was this the first LCD of this type on a Nikon DSLR, but also is 2.7 inches with a 230,000-dot display. Plus, it gives D5000 users 100-percent frame coverage and a choice of seven levels of brightness. New DSLR camera buyers attracted to the D5000 can replicate the ease of shooting the mostly casual images of their older compacts as well as elevating their creativity with the versatility of the tilt-and-swivel monitor.

6.   Nikon has also made the D5000 a very favorable choice because it includes the D90’s 11-point auto-focus system, which is capable of tracking color as well as distance. Third-party tests confirm a well-above-average auto-focus operations in both bright light and lower light situations. The D5000 also has the same ISO range of 200 to 3,200 as the D90 as well as the optional expansion of the range to 100 to 6,400.

7.   To make the transition as easy as possible from a compact, Auto is one of the seven shooting modes on the D5000. Users can start to capture better-looking images immediately as they learn how to be more creative with the other DSLR-type shooting modes.

8.   The D5000’s viewfinder provides 95-percent frame coverage; plus, the diopter adjusts for your vision, so you view any scene or subject in sharp focus, even if you’re not wearing your glasses.

9.   Although the continuous shooting, or burst rate, of the Nikon D5000 (4 frames per second) is a bit slower than the D90 (4.5 frames per second), it’s still a very favorable transitional feature for entry-level DSLR buyers. The D5000 actually captures more RAW files (11) and JPEGs (63) than the D90 (7 and 25, respectively), which means the new DSLR shooter is less likely to miss the pictures they want.

10.        Image quality also receives very good marks in third-party tests, delivering precise color, contrast and sharpness. Once a photographer new to the D5000 learns how to use the picture control menu, he or she will be able to shoot with even greater quality results.

11.        Nikon also did the prospective owners of a D5000 another favor with its video capabilities, which is the equal of the D90, at 1280x720, 640x424 or 320x216. A more meaningful benefit, however, may be that the D5000 will accept many Nikon lenses, opening a wider world of video creativity that isn’t possible with a consumer-level camcorder.