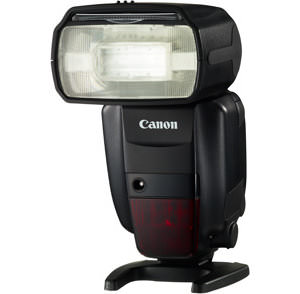 As the technology in professional-grade DSLR cameras continues to advance and commercial photographers demand more from their equipment, flash units must also keep pace. That’s why Canon has introduced its new Speedlite 600EX-RT at the same time as the new Canon EOS 5D Mark III and prior to the new top-of-the-line DSLR, the EOS 1D X. Canon knows that as photographers upgrade to these newer models of cameras, they will also need more versatility and reliability from pro-level flash units. The Canon Speedlite 600EX-RT delivers a big bundle of capabilities that will certainly attract the attention of many serious amateurs and professionals.

Canon started with a new wireless multiple flash system with standard optical wireless and radio-controlled, two-way wireless functionality. The signal will reach as far as 98.4 feet (30m) to as many as 5 groups of Speedlites, to a maximum number of 15 flash units. Being radio-controlled, the new two-way wireless feature isn’t limited directionally or by the presence of physical barriers, as are standard optical wireless devices. Any of 15 communication channels can be utilized, either manually or automatically.

The versatility of the Canon Speedlite 600EX-RT Flash

is quite evident once you begin to take a closer look at the flash head. With its zoom capability, the head matches the angle of view of a 20–200mm lens. The head can also be programmed to zoom according to a camera’s sensor designation (full-frame, APS-H and APS-C). Slide the diffuser (which is included) into place and the flash head increases its coverage to that of ultra-wide-angle lenses to as wide as 14mm.

The flash head swivels 180 degrees right or left as well as 90 degrees up and 7 degrees down. The Speedlite 600EX-RT includes a catch light panel. It is used when the head is at the 90-degree up angle and facing front. This extra touch of lighting control places light in the eyes of the subject to enhance portrait work. Canon has also given the Speedlite 600EX-RT a more versatile guide number: 197 feet (60m) at ISO 100. The complete kit includes the diffuser, a bounce card and a color filter adapter and two colored gels.

Canon built the Speedlite 600EX-RT to be more reliable, with a construction philosophy that matches its new pro-grade DSLRs. Pros want to know their flash equipment is capable of delivering uninterrupted performance for many long days and years of shooting, and in unforgiving environments. Canon hasn’t been the leader of professional digital photography equipment without understanding how important durability is to pros. The 600EX-RT is not only built tougher, but also Canon has upgraded dust and water resistance and improved the sealing around critical parts. The hot shoe connection has been redesigned and the people at Canon focused specifically on creating a much better seal at that point against dust and moisture.

Canon is serious about the Speedlite 600EX-RT being the pro-quality flash to pair with Canon’s new pro-quality DSLRs, Canon EOS 5D Mark III

. The flash’s AF Assist Beam not only works with the AF frame of all EOS cameras, but also specifically with the 61-Point High-Density Reticular AF on the newest Canon DSLRs. Owning and using these cameras wouldn’t make much sense unless the assist beam in a flash unit did its job admirably. Such is the case with the 600EX-RT. Its AF Assist Beam supports the pros’ need for an AF system that operates more precisely and quicker, even when the light is low.

Pros don’t want to fiddle with a LCD display on a flash that makes shooting assignments longer and more difficult. Canon has addressed this need too, with a completely redesigned dot matrix LCD display and matching backlit function buttons. Pros who shoot with the Speedlite 600EX-RT will have easy access to an increased amount of data about flash status and settings and wireless set-up.

The Canon Speedlite 600EX-RT must also be a creative tool the equal of high-end DSLRs. This Canon flash allows the pro to choose from 18 custom functions, such as flash exposure bracketing controls, modeling flash, test firing controls, AF assist control and power and energy saving features. In addition, there are 7 personal functions, including LCD panel illumination color and Master/Slave configurations.