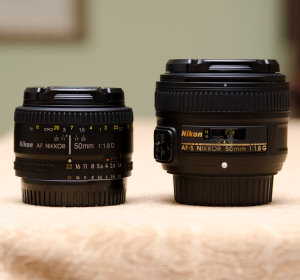 Ever since the release of Nikon 50mm 1.8G lens with the built in AF motor, I’ve been asked to compare this lens with the older version 50mm 1.8D lens. I decided to test the bokeh, auto focus speed, sharpness and contrast.

Size comparison and built quality: A lot of people don’t like the built quality of 50mm 1.8D lens because it’s too plastic like. 1.8G lens is not built for rough use either but the built quality is decent and very much acceptable. It’s slightly bigger than 1.8D and weighs a bit more. The weight is somewhat irrelevant because they’re both very light.

Bokeh comparison: Both pictures you see were shot at 1.8 aperture. I don’t see any significant difference in bokeh. Of course if I were closer to my subject, the bokeh (out of focus area) would be silkier. I would say the bokeh on both the lenses is almost the same.

Auto Focus Speed Test: 50mm 1.8D lenses does focus fast. I’ve never had any issues with it. The new 50mm 1.8G lens is a bit faster in my opinion. The more noticeable difference is the sound. 1.8G lens is very quiet due to the silent wave motor.

I think it’s very clear that 1.8G lens has the edge in sharpness. If you look at the hands, you’ll notice it’s rather soft with 1.8D lens. Even at f/2.8 the 1.8G lens was able to get a decent sharpness on the hands. The color contrast is much better on 1.8G lens. Sure you can increase the contrast for 1.8D in post processing but 1.8G will give you high contrast color even if you don’t edit every picture you take. Less editing will also maintain the quality in your picture.

Conclusion: In my opinion both these lenses are great but if you were to look at the quality alone without considering the price then 50mm 1.8G lens is the winner. If you can afford to purchase 1.8G lens without breaking the bank then you should go for it. Some people may not justify the additional cost as 50mm 1.8D is still an excellent lens but for me the newer 1.8G is worth the price. In fact, I’m getting the new 85mm 1.8G lens as well.

All pictures are taken by PhotographersOnUTube

You can find their Photography Turorial channel here