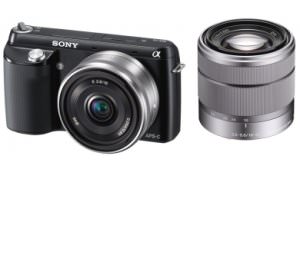 1.   Known as a consumer electronics innovator for decades, Sony has never been hesitant about being fully vested in the latest technology, which is why it is the number-two digital camera company in the world. Sony may not have introduced the first mirrorless, interchangeable lens system (ILS) camera (generally attributed to Leica and Panasonic), but its marketing of the Sony NEX 5 N, NEX-C3 and NEX-7 has made this trio a popular choice among ILC buyers during the brief, two-year period they’ve been available.

No doubt, Sony is well aware that independent research is predicting a doubling of ILS camera sales during 2012, and the company has demonstrated its commitment to grab as large a share of the market as possible with the 2012 introduction of the NEX-F3.

2.   Given its position in Sony’s ILS line-up, the NEX-F3 is definitely aimed at digital photographers upgrading from a compact, but may feel they are not ready for the complexities of a DSLR, even an entry-level model. This group of amateurs will discover that the NEX-F3 provides them with just enough “big-camera” capabilities to take better photos of their families and friends and begin to explore various types of photography (portraits, landscapes, macro, etc.) with the selection of Sony’s E-mount lenses. For many, this is the primary advantage of an ILS camera: a bit of the Goldilocks concept, not too much or too little.

3.   What makes the NEX-F3 such a compelling offering is that it includes many of the basic features of the older NEX-C3, which have proven to drive sales, and some of the advanced functionality of Sony’s NEX and SLT/DSLR lines. The body design of the NEX-F3 is where this combination is clearly evident first. Its size is more reminiscent of the NEX-5N and NEX-7 than the NEX-C3. The NEX-F3 is noticeably larger, which boosts the depth of the handgrip; and its taller dimension fits more comfortably in your hand. Buttons, dials and other points of control follow in the footsteps of its bigger ILS brothers.

4.   The APS-C-size, 16.1-megapixel CMOS sensor in the NEX-F3 will garner plenty of attention, especially as it is paired with a Bionz image processor that is more advanced than found in the NEX-5N. Being that extensive independent tests of the 5N’s picture quality judge the results to be good to excellent in terms of sharpness, noise and color accuracy, it’s reasonable to expect the NEX-F3 to match or exceed those image characteristics.

5.   Equipped with a 3-inch, 920,000-dot TFT Xtra Fine LCD screen on the back of the camera, the NEX-F3 is comparable to most ILS cameras at the same price point. Sony has enhanced the LCD’s functionality, however, by designing it to tilt 180 degrees. Self-portraits are easier because as the LCD tilts to almost upside down, the view of your smiling face flips 180 degrees.

6.   From its high-end NEX-7 ILS camera, Sony gave the new NEX-F3 the same built-in flash capability. The designers were also paying attention when they positioned it off-center of the lens mount, which significantly lowers the possibility of red-eye effect or the lens blocking some of the flash field.

7.   Digital photographers mostly likely to be attracted to the NEX-F3 will confront many low-light conditions in which they will want to capture highly acceptable images. This camera supports them with an ISO sensitivity range that reaches 16,000 and a top-end of 3,200 in Auto ISO, which is double of the older NEX-C3.

8.   The market for the NEX-F3 also expects plenty of video functionality, and this camera delivers with 1080 Full-HD video at 60i or 24p in the AVCHD format. The NEX-F3 also has a multi-use socket that accepts a stereo microphone.

9.   The Sony NEX-F3 ILS Digital Camera is scheduled to be released during June 2012, but can be pre-ordered in black or silver with an 18-55mm lens for $598.00 from B&H Photo Video. More information is available here.