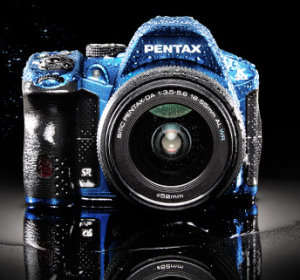 1. Pentax may not be one of the first names that come to mind for a moderate mid-level DSLR, but the company’s newest camera, the Pentax K-30, appears to earn just consideration. It’s a choice that compares favorably to the Nikon D90, Canon 60D and Rebel T3i and Sony A57 and A65 DSLRs. Available for purchase during late June 2012, the K-30 can be interpreted as an attempt by Ricoh, the new owner of Pentax, to take advantage of the reputation of the Pentax K-5 digital camera. Some consider it the best APS-C DSLR for its approximately $1,100 (body only) price tag.

3. When placed next to a K-5, the Pentax K-30 is clearly a member of the same family, although it has it’s own distinct styling with various angled sections. It will probably receive a love-it-or-hate-it response from many. At 5.1” x 3.9” x 3.3” (129mm x 98mm x 83mm), the K-30 remains loyal to Pentax’s reputation for designing and manufacturing cameras that are ergonomically superior.

4. The K-30’s stainless steel chassis and polycarbonate body, instead of magnesium alloy, is exceptional durable and reduces the weight to a reasonable 1.43 lbs. (650g). Pentax engineers have also given the K-30 plenty of weather sealing and this protection is somewhat enhanced by the angular design of the exterior.

5. Pentax’s attention to the importance of ergonomics is also evident in the comfortable grip and the easy-to-reach series of buttons, dials and other exterior controls.

6. The spacious 3-inch, 921,000-dot TFT LCD screen provides 0.92x magnification and 100% coverage. Plus, you’re able to adjust brightness and color to help give you a clear, detailed image in various shooting environments.

7. The K-30’s autofocus system actually exceeds the specs of the more-pricey K-5. The SAFOX IXi+ AF has 11 AF points with 9 cross-type. The K-30 has also been updated with an AF-sensor lens that virtually eliminates chromatic aberrations, which often causes the AF to misread the focusing needs of the image. Another common problem that the Pentax K-30’s AF system addresses is the subject that wanders from the AF point you’ve selected to one nearby. The K-30 is expected to do a better job tracking focus of the subject when the wide-area AF mode is activated.

Until it is released during late June 2012, the Pentax K-30 DSLR is available for pre-order from B&H Photo Video. The camera comes in a black, blue or white body, which is $849.95. Add the 18–55mm kit lens and the price is $899.95. Other body-and-lens combinations are available. For more information, click here.