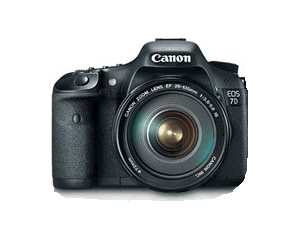 Since Canon introduced the EOS 7D during 2009, it has proven to be a very popular mid-range DSLR for many digital photography enthusiasts, hobbyists and serious amateurs. At the time, Canon was very conscious of its position in the marketplace, which is why it named this model the 7D instead of the 70D, as an extension of the X0D line of cameras. It was the new brand awareness that Canon wanted.

2.   Because there are so many loyal EOS 7D owners, Canon had a broad range of digital photographers from which to obtain feedback about how to make the camera better with new firmware. Since its launch, the 7D has served thousands of photographers with superior image quality and a full complement of features and functions for landscape, nature, wedding, portrait, sports, news and many other photographic forms. Now, firmware v2 essentially re-invents the EOS 7D, making it competitive with newer DSLR models from other manufacturers.

3.   Firmware v2 boosts the continuous shooting mode with technology similar to Canon’s pro-level EOS-1 series. The maximum RAW buffer has increased to 25 RAW files or 130 with JPEGs. Enthusiasts and serious amateurs will no longer miss the image they wanted with this faster RAW burst rate, plus the 7D’s 18MP resolution and 14-bit image processing will deliver sharp, color-rich digital photos.

4.   Any Canon EOS 7D DSLR becomes a significantly enhanced editing tool with more in-camera capabilities. As soon as images are captured, photographers are able to adjust white balance, sharpness and Picture Style as well as manage RAW files and fix peripheral illumination, distortion and chromatic aberration. The edited files are saved as new JPEGs, and a PC or Mac is not required to resize the JPEGs immediately.

5.   Workflow is also improved with firmware v2. It includes an image rating function, so photographers can quickly select the “keepers,” even before they return to their studio or home. Each image is tagged with a rating, which is stored in its metadata. Then, Canon Digital Photo Professional, Apple Aperture, Adobe Lightroom and Bridge and similar editing products easily identify the rating tags, cutting photographers’ image management time.

6.   Photographers will be able to choose a specific maximum automatic ISO speed within the standard 400–6,400 range of the EOS 7D with the addition of firmware v2. Exposures can be more precise and more carefully selected to match narrow lighting conditions and make the 7D a more creative tool.

7.   As video shot with a DSLR became more popular among amateurs as well as multi-media professionals, the EOS 7D’s video specs of 1920x1080p Full HD could be found on virtually all DSLRs, and even some compact cameras. Canon, therefore, packed firmware v2 with 16-bit digital stereo sound, sampled at broadcast quality 48KHz. Video shooters can also accurately control audio levels with 64 manual sound settings. In addition, peripheral noise that is often recorded on the audio from the use of other DSLRs is almost eliminated with the digital wind-cut filter included in the firmware update.

8.   Canon EOS 7D owners will also be able to utilize the additional features and capabilities of Canon’s newest GPS Receiver, the GP-E2. It’s slips into the camera’s hot shoe and communicates through a cable. Photos are easily tagged with standard GPS data, longitude, latitude and altitude, but now photographers can record the direction of the camera and view their digital photography adventure with Google Maps and Canon’s free Map Utility application.