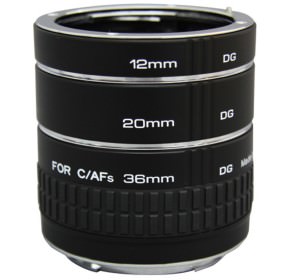 For years, photographers have come to rely on the Kenko Auto Extension Tube Set to capture beautiful macro images without buying expensive macro lenses. The set consists of three tubes of 36mm, 20mm and 12mm and all of which mount to Canon EF/EFS, Nikon AF and Sony Alpha lenses.

As of late March 2012, there is now a Kenko extension tube set specifically for Micro Four Thirds cameras: The Kenko DG Extension Tube Set. In fact, there are two versions, one that mounts to Panasonic LUMIX and Olympus M. Zuiko lenses and another that mounts to Sony E-lenses for its NEX compact camera systems. With Micro Four Thirds, or mirrorless, interchangeable lens cameras, growing in popularity, you may have considered this alternative system to bulkier and heavier “standard” DSLRs. Kenko has recognized this trend, so its newest set of extension tubes means you can enjoy the creativity and results of macro photography with your micro DSLR.

The Kenko DG Extension Tube Set for Micro Four Thirds cameras includes a 10mm and 16mm ring and operates like the set for APS-C and full-frame lenses. As you add more tubes between the camera body and the lens, the lens is further from the sensor, which changes the focal length of the lens, thus increasing the magnification and bringing you closer to your subject.

Of course, the greatest benefit of all extension tubes, including the Kenko DG Extension Tube Set for Micro Four Thirds cameras, is that they cost much less than buying a separate macro lens and gives you all the original optical quality of the primary lens. For example, the Sony 30mm f/3.5 Macro Lens is $254.99 compared to just $179.00 for the Kenko set. Plus, you have the versatility of using the extension tubes on a variety of standard lenses with a range of focal lengths.

A particular benefit of the Kenko extension tubes for Micro Four Thirds photography is that they have complete electronic connections allowing for standard operation of autofocus, exposure and EXIF data.

Both the Panasonic/Olympus and Sony versions come with perfect coupling for the diaphragm and TTL.EE metering. The tubes compatible with Panasonic and Olympus lenses are approximately 57mm in diameter, while the Sony E-mount tubes are approximately 61.5mm in diameter. All of these tubes don’t weigh much, with both 10mm versions at 1.69 oz. (48g). The 16mm tube for Sony E-mount is a bit heavier than the 16mm for Panasonic/Olympus, 2.64 oz. (75g) and 2.46 oz. (70g), respectively. At these miniscule weights, the Kenko Extension Tubes for Micro Four Thirds cameras are much easier to carry and take much less space than a dedicated macro lens.

It’s a good idea to review the complete list of Panasonic, Olympus and Sony E-mount lenses that are compatible with the Kenko DG Extension Tube Set for Micro Four Thirds. Click here to read it.

It’s important to remember to use a lens with a longer focal length than the extension tube attached. Both tubes for Micro Four Thirds photography total 26mm, so the lens should have greater than a 26mm focal length; a 35mm lens would be a good choice. Some photographers strongly recommend using a tripod when both the 10mm and 16mm rings in the Kenko DG Extension Tube Set for Micro Four Thirds are attached in tandem to a camera. Macro images are sharp and autofocus works excellently when shooting handheld with either single tube attached.

The Kenko DG Extension Tube Set for Micro Four Thirds is available from Amazon for $179.00