The Canon Powershot G15 Compact Camera: The Latest Champion In A Long Line Of Winners 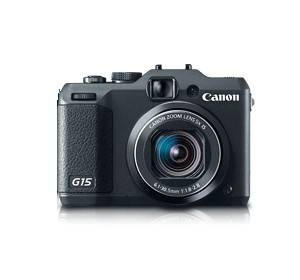 In the compact camera market, few model lines have been as popular as Canon’s PowerShot G-series. Since 2000 (which seems like ancient history in the digital camera world), Canon has been more than competitive with the other manufacturers because it has given photographers PowerShots with fast lenses, articulated LCDs, optical viewfinders, RAW-files functionality and a full complement of external controls.

Many former film-only photographers credit a PowerShot G with motivating them to try the new technology of digital photography. Today, PowerShots have evolved to such a high level that many serious enthusiasts choose the current model over an entry-level DSLR or mirrorless camera and professional photographers love them as a second camera or to use in their personal lives.

The PowerShot G-Series has been buffeted by the introduction of lower-cost APS-C DSLRs and the more recent interchangeable lens camera (ILC) system phenomenon, but G-Series cameras continue to be strongly competitive against their own kind, and the threat of other options. The PowerShot G12 is the last model maintaining the progression of numbering; and it’s still a worthy choice, even though it is two years old, definitely the old man of the market.

Then, during January 2012, Canon brought the G1 X to the market, prominently promoting it as Canon’s first compact camera with a large, 4:3 aspect ratio, 14.3-megapixel CMOS sensor. It rivals some APS-C sensors, in terms of sensor height at 1.5 inches (18.7mm). Not only does this new sensor have the same pixel size and organization as the Canon EOS Rebel T3i, but also overwhelms the PowerShot G12’s sensor, with approximately 6.3 times more surface area.

Despite, the G1 X’s “power shot” at the compact camera market, Canon has no intention of being reactive to the competition, which is why it introduced the new PowerShot G15 during September 2012. Early in the review process, it appears the PowerShot G15 will provide photographers—and Canon—with another winner. Of course, it may make choosing the right compact camera a bit more time-consuming, since there are many competitive alternatives, but any photographer planning to buy this type of digital camera should spend that time. This PhotographyTalk article is a good place to start, and will likely help save a significant portion of your camera-research time.

Whether you’re a Canon PowerShot G-series veteran or new to this line-up, the PowerShot G15 leaps from the gate with a number of excellent improvements and upgrades from the G12.

Other features you would expect to find on a compact camera at this level are clearly included in the PowerShot G15: a high-resolution, three-inch, 920,000-dot LCD screen; an 80–12,800 ISO range; Full-HD video at 24 fps and built-in microphones to record stereo sound; optical viewfinder; and RAW format image recording.

The following chart should be helpful in your selection process, as it compares the sensor characteristics of a number of compact cameras that compete with the new PowerShot G15. The 35mm-equivalent aperture range has been added as a depth-of-field comparative, which is what contributes to excellent bokeh for your portraits, and all images, where you want the subject matter to pop from the background.

The two conclusions that can be drawn from this comparison is that the Canon PowerShot G15’s fast aperture and one of the longer focal lengths should deliver highly acceptable background blur, even at the telephoto end of the range. The second is that the 35mm-equivalent aperture range reveals that the G15 will do a very good job in low light, although other details, such as the sensor characteristics and how well the camera processes JPEGs, also affect low-low productivity in any camera.

Canon had the smarts to design the PowerShot G15 with lines that are similar to the recent G1 X, instead of the older G12, which could have made the G15 look dated. The various exterior features and controls emulate the G1 X even more, with a few exceptions to keep the G15 small and compact.

Now that the Canon PowerShot G15 has been introduced, many in the industry think its primary competitor will be the Nikon Coolpix P7700, which was release one month earlier (August 2012). The comparisons will probably center on the P7700’s larger body (less compact), no optical viewfinder and a lens that is just a bit slower than the PowerShot G15. Its focal length range equivalent is less than the P7700’s 28–200mm. Making a choice has as much to do with what kind of photography you want to shoot and under what conditions. Both cameras are prices the same (OK, Amazon offers the P7700 for $2.05 less!)

The Canon PowerShot G15 compact camera is available from Amazon for $499.00