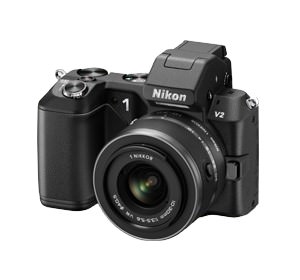 Although Nikon, and then Canon, were the last of the major camera manufacturers to enter the interchangeable lens camera system, or mirrorless, competition, Nikon is moving ahead briskly with the October 24, 2012 introduction of the new 1 V2 digital camera by Nikon. This is the successor to the original 1 V1, which was announced during mid-September 2011, and features more than just a few minor upgrades.

Some thought the 1 V1 and 1 J1 sensors were a bit light on the megapixels, at a modest 10.1 million. The V2 bumps the pixels by 40% with a 14.2-MP CS-format CMOS sensor and pairs it with the EXPEED 3A image-processing engine. At 1 inch, or 13.2 x 8.8mm, the Nikon 1 system’s sensor is physically smaller than the standard Four Thirds system sensor, which may still have some photographers and reviewers scratching their heads.

Nonetheless, the 1 V2’s new sensor and processor means Nikon’s new mirrorless camera has a greater ISO sensitivity range than the 1 V1, which equates to a stop higher, or 160 to 6,400 compared to the 1 V1’s 100 to 3,200. Low-light photography will be less of a challenge; and it’s further enhanced by the addition of a pop-up flash and the retention of the hotshoe from the 1 V1. The 1 V2 can now accept the new Nikon Speedlight SB-N7 and Nikon’s other SB-N5 flash units.

With the upgraded EXPEED 3a processor, the V2 delivers as many as 45 full-resolution images as fast as 15fps in continuous autofocus mode. Select a single AF point and exposure during the first frame and the camera will generate 40 images at 60fps.

The 1 V2 has a noticeably much larger grip with a textured surface that makes it both comfortable and very secure when holding and shooting it with one hand.

Another major modification that should attract the attention of serious enthusiasts is the placement of a mode dial on the top plate of the body. This will be more familiar to most photographers and no longer requires selecting shooting modes from the LCD screen menu, which can be cumbersome and time-consuming.

Nikon not only made the mode dial set-up familiar to experienced photographers, but also added Auto Scene Selection, Best Moment Capture and Motion Snapshot that make the shooting process easier for the beginner. Auto Scene Selection is a relatively common aid that indicates which settings provide the correct exposure. Best Moment Capture works a bit differently. Once it is selected and the Fn button is pushed, the photographer may choose either Smart Photo Selector or Slow View.

Smart Photo Selector is not new, but it has been improved, so the user decides to record 20 images before or after pressing the shutter button. The 1 V2 shows the best five photos, and then the photographer chooses the keeper.

Slow View is a new mode that captures those 40 full-resolution images at 15 fps that the EXPEED 3a process makes possible as soon as the shutter button is pressed just half way. Maintain the half-position of the shutter button and the camera slowly previews all 40 images. Pick the one you want, and then push the shutter button the rest of the way. That image is then recorded onto the SD card.

Enlarging a number of the control buttons on the rear of the camera and reconfiguring their positions appear to make camera operations easier, without an awkward reach with your right thumb or left index finger.

For those camera manufacturers (read Canon and Nikon) that were late to the mirrorless camera party, one of the downsides of leaping into the marketplace has been a limited selection of compatible lenses. Nikon currently has 6 that the new 1 V2 will accept, but recently the company announced three new lenses in development. These include the 1 Nikkor 10–100mm f/4–5.6, the 6.7–13mm f/3.5–5.6 and the 32mm f/1.2 lenses. It’s good to see that Nikon is trying to give 1 Nikon mirrorless camera owners more options.

Nikon has certainly learned what mirrorless camera photographers want, based on the sales success of the 1 J1 and the less enthusiastic acceptance of the V1. The new 1 V2 should prove to be more competitive and attract more serious photographers.