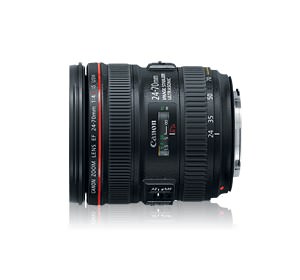 Although the new Canon EOS 6D full-frame DSLR (released during September 2012) is smaller and weighs less than its professional full-frame counterparts, Canon obviously thought it deserved a complementary lens…and the new Canon EF 24–70mm f/4L is it. Although some have described it as the 6D’s “kit” lens, full-frame DSLRs are not typically known to be paired with a lens in this manner, as are most entry-level and other APS-C bodies.

Nonetheless, many enthusiasts and amateurs attracted to the EOS 6D will recognize the wisdom of choosing the EF 24–70mm f/4L as their first lens, given its equally compact and lightweight design. Canon has certainly packed this new lens with the quality features of its best lenses.

Canon has given the EF 24–70mm f/4L a compelling feature, which is a macro mode with as much as 0.7x magnification. The Hybrid IS complements this feature, since Canon created this image stabilization technology to improve the results of macro photography, as compared to most other IS systems. The lens’ 15 glass elements in 12 groups, and the inclusion of 2 UD glass elements, also contribute to the overall image quality.

Canon camera shooters will also like this new lens’ mounting versatility, since its EF mount accepts both APS-C and full-frame Canon DSLRs. Plus, with the use of the EF-EOS M mount adapter, mirrorless camera owners will be able to use this lens with their EOS-M bodies. Photographers with an APS-C, or cropped-sensor, camera will have the added benefit of a 38–112mm 35mm equivalent focal length, which is an excellent range for landscapes, portraits and most other subjects that hobbyists and enthusiasts shoot

It can’t be overemphasized that the EOS 6D and this new, complementary lens represent a mini-revolution in digital photography, especially for those who have dreamed of shooting with full-frame capabilities, but couldn’t spend the money or were willing to carry the heaviest camera/lens combos. Remember, the 6D weighs just 26.7 oz. (755g) as compared to the EOS 5D Mark III at 33.5 oz. (950g). Add the new EF 24–70mm f/4L’s 21.2 oz. (600g) to the 6D and you have a comfortable, very portable package of high-quality picture making, at just less than 3 lbs. Pair the 5D Mark III with the EF 24–70mm f/2.8L, which weighs 28.4 oz. (805g), and a more likely choice of pros, and their carrying almost 4 lbs. It doesn’t seem like much of a difference, until you have to carry that extra pound all day.

Otherwise, the new Canon EF 24–70mm f/4L lens fully presents the classic company look, with the red piping accent and points of control in familiar locations. The zoom ring encircles the barrel towards the back and the manual focus is located within easy reach at the front. On the left of the barrel, two small switches are used to choose focus mode and activate the IS system. The lens works with 77mm filters, and as would be expected from a Canon “L” series lens, the front element doesn’t rotate when focusing, so the lens readily accepts polarizers and neutral density graduated filters. Even the petal-shaped, bayonet hood reflects the quality of this lens. What the hood’s specially treated interior surface doesn’t reflect is light.

Of course, we’re early in the life of this new lens…you can’t even buy one yet at the time of the writing of this PhotographyTalk.com article. It seems to be good value for its features and qualities, but the test is in the marketplace and future careful examination and testing of its image-making characteristics. Considering the EF 24–70mm f/4L lens’ price tag, it is probably safe to say that Canon’s strategy is to convince any enthusiast or amateur who has moved forward into full-frame photography with the EOS 6D DSLR that he or she should spend the money for the kind of lens that is required to benefit fully from a full-frame camera. As always, time will tell if this is a winning strategy.