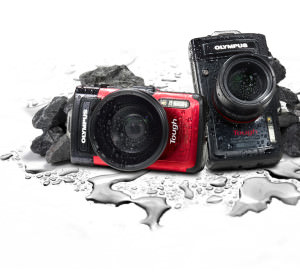 The empty champagne bottles had barely been recycled when the major camera manufacturers were flooding the market with a host of new camera models for 2013. Most of them are compacts, but the one with some significant features is the Olympus Stylus Tough TG-2 iHS Digital Camera. This is an upgrade from the TG-1 model that Olympus released during May 2012; and its new capabilities are just in time for a new year of adventures. If you’ve planned a winter vacation on the slopes or where the breezes are warm and the water is blue and clear for snorkeling and scuba diving, then the Stylus Tough TG-2 may be your best choice to capture all the fun.

Want to see reviews from other photographers? Read them HERE on Adorama.

What is sure to attract much attention is the improvement in this camera’s “tough” features. The previous TG-1 model was waterproof to 40 feet, but the TG-2 extends that another 10 feet, to 50. It retains the TG-1’s other rugged specs: shockproof to 6.6 feet, freeze-proof to 14º F, crushproof to 220 pounds and dustproof. The new Olympus TG-2 also offers the other important features that every true adventure photographer needs: a built-in GPS, electronic compass and manometer that measures the underwater depth and signals when you’re close to 50 feet beneath the waves.

Olympus has also made sure that the new Tough TG-2 is not just a utilitarian device, giving it an interesting body design. The aluminum body has more of a tooled look with various textured surfaces to make it easy to grip, exposed screw heads, two lens rings of different colors that are interchangeable accents and a rather “fashiony” wrist strap.

Don’t be fooled by the styling of the TG-2, however. It’s packed with all the digital camera technology you’ll need to bring home amazing images and video of the wild rides and challenging adventures that define your personality and lifestyle. A 1/2.3-inch, 12.4-MP backside illuminated CMOS sensor and its working partner, a TruePic VI image processor, allow for a rather liberal ISO range of 100 to 6,400. The sensor and processor also power the kind of continuous shooting speed that is required to show everyone every moment of your adventures. You can capture 5 fps at 12-MP resolution for as many as 25 frames, or reduce the resolution to 3-MP and record as many as 100 images at 60 fps. Since your stance or position may not be always steady, the Olympus Stylus Tough TG-2 is designed with sensor-shift image stabilization, so any inadvertent camera movement will control blurring, so your images are sharp. You’ll also be able to compose and frame your photos and video with much clarity, viewing the world via a 3-inch, 630,000-dot Organic LED display on the back of the camera.

Olympus knew it had a winner when it released the original TG-1. Its f/2.0 lens was the widest and, therefore, the fastest on any adventure camera. The new TG-2 comes with the same lens specs: a 4x optical zoom lens that has a focal length range of 25–100mm in 35mm format. Attach the lens converter adapter, and the TG-2 accepts a fisheye converter lens and a tele-converter lens. The tele-converter lens transforms the 4x optical zoom to almost 7x, so you can fill the frame with distant action and excitement. Olympus did add a new capability to this excellent lens. Microscopic Macro essentially doubles the magnification to 14x, and Olympus claims the image quality is not affected much, even when focused as close as 0.4 inch (1cm).

Of course, video of your adventurous life is what family members and friends will ask to see again and again and is sure to make you a star on YouTube. Like its predecessor, the Olympus Stylus Tough TG-2 records 1080p Full-HD video at 30 fps. You can also capture high-speed footage in Motion JPEG .AVI format, and then play it back in slow-mo in two speeds: 120 fps for VGA and 240 fps for QVGA.

According to information available at the writing of this review, the Olympus Stylus Tough TG-2 iHS digital camera will be available during March 2012 for approximately $380. Before that date, check on Amazon.com, which is likely to offer pre-ordering, so you’re assured of having this tough, little beauty before the summer travel, vacation and adventure season.