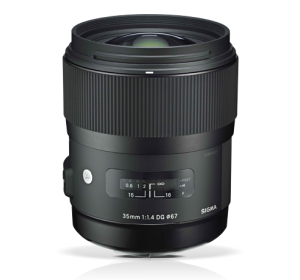 Ask professional photographers and serious amateurs about the lens families they prefer and you shouldn’t be surprised to hear “Canon,” “Nikon” or “Sony” as their top choices. No doubt, the Big Three manufacturers have the reputation and track record to earn the loyalty of those photographers, who need the highest quality lenses and are willing to pay the price. Other lens manufacturers, Sigma among them, have been able to succeed by cultivating specific niches. In Sigma’s case (as with Tamron), these have typically been all-purpose or superzoom lenses, such as 18–250mm, 18–270mm and 150–500mm focal lengths. These have proven to be affordable alternatives that also deliver respectable results.

Sigma has been in the marketplace far too long to be satisfied with being shunt into a narrow position, which is why it raised some eyebrows at Photokina 2012, when it revealed to the world that its lens products would be classified in 3 groups moving forward. These are “Contemporary” for smaller, versatile zoom lenses; “Sports” for larger telephoto lenses; and “Art” for ultra-wide-angle, macro and fast prime lens. Sigma then started this new era with the introduction of a new lens for each category. The Sigma 35mm f/1.4 DG HSM lens is the first designated as an “Art” product. Making this move was unlikely to attract the attention of the serious photographers for which this new lens was designed, unless it could prove to be competitive with the equivalent Canon, Nikon and Sony lenses, which have been solid winners in the marketplace.

The early conclusions, however, from more than one quarter, is that this new Sigma lens has many features and capabilities that actually outperform the Big Three’s matching lenses, which is quite an accomplishment and one not to be taken lightly.

Sigma obviously knew that it had no possibility of competing unless it started with an excellent optical configuration, and the 35mm f/1.4 delivers the goods. It’s built with 13 glass elements in 11 groups, 4 of which have Super-Low Dispersion (SLD) glass, 1 “F” (fluorite-type) Low Dispersion (FLD) glass and 2 aspherical elements.

Third party tests of the Sigma 35mm f/1.4 optics clearly show it to be every bit as good, and even better, than its Canon, Nikon and Sony counterparts. Of particular importance to serious photographers is the nothing-short-of-excellent sharpness performance in the center of the frame and even in the corners at the widest aperture of f/1.4. Move to narrower apertures and this performance virtually jumps off the chart, especially from f/2.8 to f/8. With all those low-dispersion and aspherical elements, it’s no wonder that to see any chromatic aberration requires an extremely close inspection. Vignetting is not even an issue when this full-frame lens is attached to an APS-C camera and what little barrel distortion occurs is only visible if you nitpick.

On a full-frame DSLR, the Sigma 35mm f/1.4 lens delivers an equally impressive array of test results for sharpness and chromatic aberration; however, as is often the case with wide-angle primes on full-frame cameras, vignetting and distortion are a bit more prevalent. It should be noted that all other fast prime lenses test similarly, so this Sigma lens equals their performances and often exceeds them, by the numbers.

The other feature category in which this Sigma lens equals its Big Three competitors is its HyperSonic Motor, or the “HSM” in its name. Third party testing has given the 35mm f/1.4 a top grade, as the autofocus proves to be exceptionally fast and quiet and its full-time manual override is what serious photographers expect and appreciate. The AF system is a built-in floating mechanism that produces highly acceptable image quality at all focal lengths.

No doubt, many Canon, Nikon and Sony loyalists will be initially skeptical of whether the Sigma 35mm f/1.4 wide-angle prime lens is equal to, or even exceeds, the equivalent lenses that have been their preference. The proof, of course, is in comparing the image results; and if amateurs and pros are serious about producing the best work, then investing a bit of money in the weekend rental of this new Sigma lens is apt to be money well spent. When they are convinced, they will be equally pleased to discover that the Sigma 35mm f/1.4 costs hundreds of dollars less than the same Canon, Nikon and Sony lenses.