Fujifilm X100S Compact Camera: What Can Happen When a Camera Company Listens to Photographers 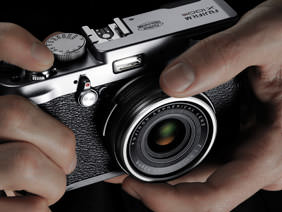 Since 2010, Fujifilm has been carving a niche for itself in the camera market by designing a number of cameras (XF1, XE1, X-Pro1, etc.) that many serious photographers, including professionals, consider excellent second-camera choices. These photographers love the exceptional image quality of their DSLRs and all the creative versatility they provide, but who wants to be burdened with carrying a DSLR all the time, especially for personal photography uses?

For this reason, many photographers gravitated to the Fujifilm Finepix X100 after its released during 2010. Its combination of retro styling and advanced technologies made it so appealing…until photographers were confronted with the camera’s firmware problems. Fortunately, Fujifilm addressed these problems, giving the X100 a second life, which created a faithful group of serious photographers who just love shooting with it.

Fast forward to March 2013 and Fujifilm has announced its upgrade, the Finepix X100S. Although this new camera hasn’t been fully tested, it appears that Fujifilm listened carefully to users and reviewers’ comments and criticisms about the X100 model. This has resulted in the much-improved X100S, a wonderful example of what can happen when a camera company pays attention to its loyal customers and the larger photography market.

Fujifilm proves its wisdom by not redesigning the look of the X100S. It knows (and the market has told it) that the original X100’s rangefinder/retro style is what first attracts the eye and why photographers can’t wait to wrap their hands around the body. The new X100S’ classic design is the home of much internal updating, as compared to the X100, but it still has the older camera’s popular fixed 23mm f/2 lens.

The 16.3-MP APS-C X-Trans CMOS sensor in the X100S is essentially the same as found in the X-Pro1 and XE-1; however, Fujifilm added phase detection to the chip, which is expected to increase autofocus speed. Fujifilm has also paired the sensor with its new EXR Processor II and its onboard Lens Modulation Optimizer. Although the only available bench test data is Fujifilm’s, the company says the Optimizer is meant to provide better control of lens aberrations, which should be evident in images shot at the largest and smallest apertures.

Fujifilm’s X-Trans sensor takes a quite different approach than the standard Bayer color filter array found in virtually all digital cameras, although it has proven to be an exceptional design for recording color and details. Four pixels are grouped in a square RGGB configuration: 2 are sensitive to green light, 1 to red and 1 to blue. This configuration is then repeated across the array. The major downside of the Bayer concept is that the pixel configuration becomes confused when it must read a replicating arrangement of shapes/colors, which may be present in certain textures and fabrics, for example. Color bands form that reduce the quality of the image. The typical solution to this problem is placing a low-pass, or anti-aliasing, filter in front of the sensor, but this tends to suppress the resolution of the resulting images.

Fujifilm’s X-Trans sensor technology addresses this issue with a 6x6 color filter array that places pixels sensitive to red, green and blue on each row and column. An anti-aliasing filter is, therefore, not required and the sensor, in theory, should provide greater resolution of the images captured. With the “field” testing of the X-Trans sensor by photographers shooting with the X-Pro1 and XE1, and the resulting feedback, Fujifilm made another wise choice when deciding to use the sensor in the new X100S.

Fujifilm has also given the X100S the company’s Hybrid Multi-Viewfinder technology, which is one of the reasons the X-Pro1 is so popular. This feature combines an optical and electronic viewfinder. The optical viewfinder delivers superior brightest needed to see what you are shooting while the electronic viewfinder provides both a Live View and image data, such as exposure, white balance, depth of field and focus. The viewfinder in the X100S is also much larger than its predecessor’s: a 2.35M-dot LCD display in place of the X100’s 1.44M-dot display.

Fujifilm also upgraded the capabilities of the Hybrid Multi-Viewfinder with what it calls a focus “peaking” display. It creates an outline around subjects or objects that are in focus. Some of that phase-detection data from the X-Trans sensor supports a “Digital Split Imaging Focusing” display. It simulates the view of manual focus film cameras.

The people at Fujifilm obviously took the comments and advice from users and reviewers seriously. The new X100S includes 70 upgrades, both major and minor, creating a precise photographic instrument that appears to be the right choice for a second camera.