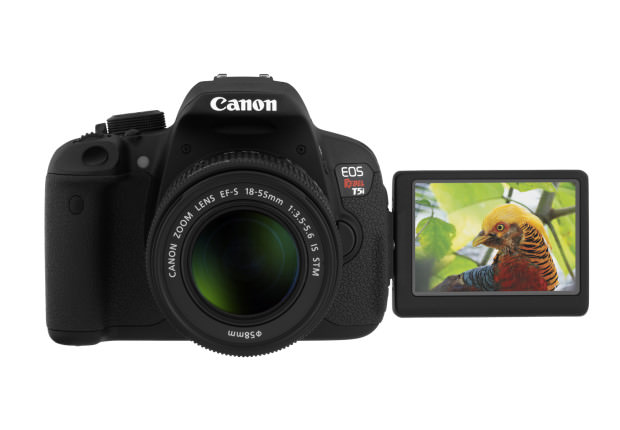 To be totally honest, Canon’s mid-March 2013 introduction of its new EOS Rebel T5i DSLR camera is a bit of a mystery, since the upgrades from 2012’s EOS Rebel T4i are relatively minor. For photographers new to DSLR photographer, however, the differences should prove to make them happy they waited until the Canon T5i became available before buying their first DSLR camera.

The new Rebel T5i has the same 18MP CMOS sensor; 9-point cross-type AF sensor with a high-precision, dual-cross f/2.8 point at center; 3-inch, 1,040,000-dot vari-angle touchscreen LCD; and Full-HD video as the Rebel T4i, as well as a number of other identical features and capabilities.

Canon was also wise to retain the Hybrid CMOS autofocus system from the Rebel T4i, which was a first for an EOS camera. With this much faster AF system, the T5i spends less time focus hunting and operates continuously for stills or video in Live View. Two-dimensional contrast detection in the AF’s cross-type points results in focusing that is more precise for virtually any composition or subject location within the frame.

You must look closely to notice any physical difference between the T5i and T4i. The exterior finish does gives the new Rebel a slightly more appealing and sophisticated appearance. The body of the T5i certainly comes complete with all the controls any photographer at this level would ever need. Canon did improve the mode dial, so it will rotate 360 degrees. The icons have been enlarged for easier viewing and slightly elevated from the surface, so they can be distinguished through your fingertips and in low light.

One of the “major” upgrades of the EOS Rebel T5i is a creative function. Canon’s “Creative Filter” effects can be seen and utilized while shooting instead of after an image has been captured. Not only is this preview and application capability new to the Rebel line in the T5i, but also matches a function that many competing models already have. Entry-level DSLR photographers will be able to determine in advance the final look of their photos and help them to be more creative during the shooting process.

What buyers of the Canon EOS Rebel T5i will also discover is that the camera is available in an optional bundle with a new EF-S 18–55mm f/3.5–5.6 IS STM lens. “IS,” or Canon’s Optical Image Stabilizer system, is an important asset for any photographer new to DSLR cameras and shooting in low light handheld. The IS system allows them to shoot at four shutter speeds slower, compensating for any camera shake and still producing sharp, clear images. “STM” refers to a stepping motor and focus mechanism that is particular useful during video recording, as it makes continuous autofocus (AF) much smoother and quieter.

The new 18–55mm lens is built with 13 elements in 11 groups, including one aspheric lens that minimizes chromatic aberration at any focal length. The lens will focus as close as 0.82 feet (0.25m) and has a 7-blade aperture to render a highly acceptably bokeh effect, or professional looking blurred backgrounds.

The new Canon EOS Rebel T5i is available for pre-order from Amazon, with an estimated release date of April 30, 2013.