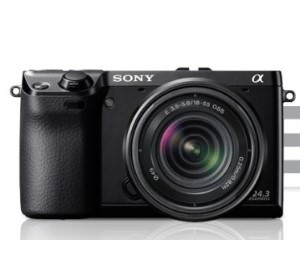 The Sony line of NEX cameras dates to the 2010 release of the NEX-5 and NEX-3—two small mirrorless digital cameras with high resolution APS-C sensors. Sony’s goal was to create a line of cameras that could provide the quality of an SLR without a large, hard to handle and difficult to understand package. Interestingly, Sony got a larger market than they bargained for. “Beginner” photographers who wanted high quality photos without the complications of digital SLRs were not the only people who purchased these cameras. The NEX-3, NEX-5 and now the NEX-7 all appeal to a broad market—including photographers who might enjoy using digital SLRs but just want something smaller and compact for day-to-day applications. Many professional photographers consider Nex7 as one of the best portrait camera by Sony.

The Sony NEX-7 is definitely marketed toward photography enthusiasts—it is definitely being offered at an enthusiast price. It is currently more expensive than many entry-level and mid-range DSLRs. The question potential buyers of the NEX-7 have to ask themselves has to be: “Is the compact size of this camera and the features it has worth losing the full set of features that come with an SLR camera?”

The 24 megapixel APS-C sensor is identical to the one Sony uses in the SLT-A77. The sensor allows for 60 fps video shooting at 1080p. 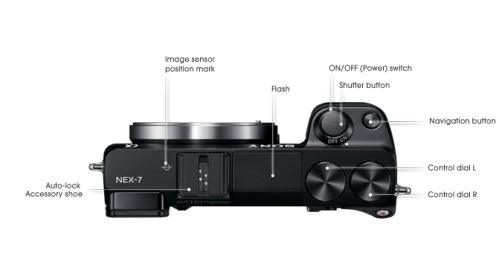 Built-in flash allows additional creative control over your subjects. You will also need it inside while using most E-mount lenses or the kit lens (they are slow). It can be used with lenses up to 18mm. On top of the camera, Sony provided a Sony/Minolta hotshoe that allows users to attach a dedicated flash. If you have off-camera flash units, the hotshoe can be used as a wireless trigger. 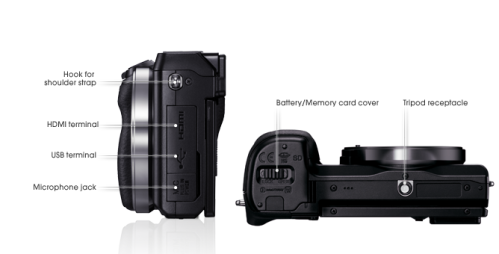 There are various connectors including an HDMI out (type C), USB (mini-B), and 1/8” external stereo mic input. In addition to the external microphone in, the NEX-7 has a built-in stereo microphone. The camera does not have a cable release.

The NP-FW50 infolithium battery is rated for 335 shots—performance drops while using the EVF because it uses more power. The battery door is on the bottom of the camera and also serves as the location of the flash card. 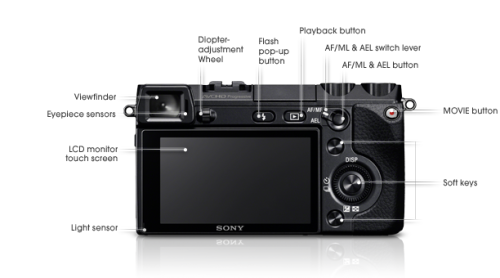 The Sony NEX-7 belongs to a group of digital “rangefinder” style cameras that are compact and full-featured. They are of similar size and shape to classic film cameras like the Pentax Spotmatic or older Leica Rangefinder cameras that many digital converts might be familiar with. The Fujifilm FinePix X100 is similar in design to the NEX-7 and definitely taps into the “rangefinder” market. It also has an APS-C sensor and an electronic view finder, but it has a fixed lens. Aside from the X100, cameras from the Micro Four Thirds (MFT) format are likely to be the NEX-7’s main competitors. The NEX-7 is about the same size as the x100 and similar popular MFT releases with EVFs from Olympus and Panasonic, the PEN E-P3 and Lumix DMC-GX1 respectively. Compared to these three cameras, users will notice the NEX-7’s larger handgrip, a simple ergonomic improvement intended to make it easier to hold and use.

To provide a more advanced photography experience, the NEX-7 has three configurable dials on the body of the camera to control shutter speed, aperture and ISO. There are two dials mounted to the top of the camera above the right hand grip. A rear wheel, similar to the wheel found on Canon DSLR systems is on the back of the camera. These control knobs allow you to adjust specific exposure settings without having to navigate through camera menus.

This release is the first in the NEX lineup to have an EVF. In the past, EVFs have had a bad reputation for being slow, low resolution and finicky in practice. Sony completely re-worked the idea of an EVF and pumped up one of the most high-tech models ever.

There are several advantages to an EVF that the screen does not match. First off, the EVF matches the 3:2 aspect ratio of images produced by the sensor, the LCD reproduces images from the sensor in 16:9. The EVF is also easier to see in sunny conditions.

A look through the NEX-7 EVF

The greatest benefit of the EVF is image preview ability. Thought the eyepiece you can see how your current settings will make the final image look before you snap the shutter release. Because it is controlled by the image sensor and computers that will be applying your settings, you can see the effects of white balance controls, exposure compensation and aperture 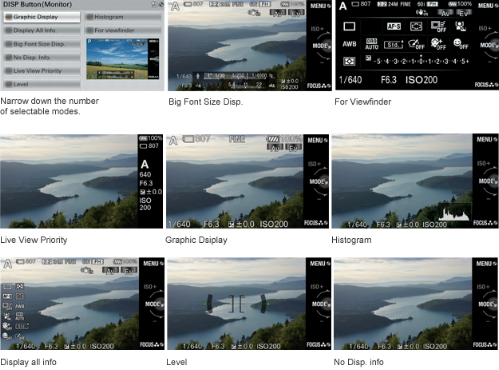 The 3 inch 921,000,000 pixel LCD screen is also good performer. The screen offers more exposure information than Sony could jam into the viewfinder. It tilts 90 degrees to a waist level shooting position similar to twin lens reflex cameras. It is not touch-sensitive.

It is hard to complain about image quality. Low light ISO performance is outstanding to ISO 1600. In the higher reaches of the NEX-7’s ISO range, quality starts to fall off and noise dominates shots. Still, the camera performs respectably well in low light conditions. Even shots at ISO 6400 are still useable. The 24 megapixel sensor delivers a lot of detail and offers images that rival or better just about every APS-C sensor camera on the market.

Video performance is top-notch. Videos come out detailed with excellent contrast and highlights. Noise is only a problem in low light conditions and indoors. Compared to other APS-C cameras in this category, the video ability of the NEX-7 is excellent.

To satisfy users who don’t want to mess around with post-processing, Sony included two types of image alteration settings on the NEX-7. Creative styles change color saturation levels—they come with names like “Autumn” or “Sepia” and they help get the color levels, contrast, and sharpness close to a particular style of photo.

Picture effects are a cool feature allowing you to essentially process images on the fly to make them look more artistic. The problem with these is that you can only use them while shooting in JPEG.

As expected with a high resolution sensor on a small camera body, lenses become the most burdensome aspect of the camera. The kit lens—an E 18-55mm F3.5-5.6 OSS—looks massive on the front of such a small body. Another burden is that users of the NEX-7 will find lens selection difficult. There aren’t very many choices available that are compatible with the Sony E-mount system.

The majority of the lenses available for the E-mount system are inexpensive and are slowed by slow maximum apertures. While the NEX-7 is built in part to appeal to photography enthusiasts, experienced photographers are going to find lens selection limiting. This is not a camera you buy to build a system of lenses around.

One excellent lens is available in E-mount—the Carl Zeiss Sonnar T* E 24mm f1.8 ZA. The problem is that to get the speed and image quality it offers, you need to shell out as much money as what you paid for the camera itself. Spending more money on lenses than on camera bodies is not uncommon in the high-end photography world, but it will be a shock to the system of new-to-digital amateurs.

The three prime lenses offered by Sony produce respectable high-quality images when paired with the 24 megapixel sensor. The real story, however, is how much they limit a photographer’s creative freedom. The 50mm lens is fast (f1.8) and therefore capable of producing respectable bokeh and depth of field effects, but it is limiting for many applications because of focal length. With a 1.6x field of view crop factor from 35mm format, the 50mm shows the same perspective as a 80mm lens on a 35mm camera. That makes it useful for little more than portraits. 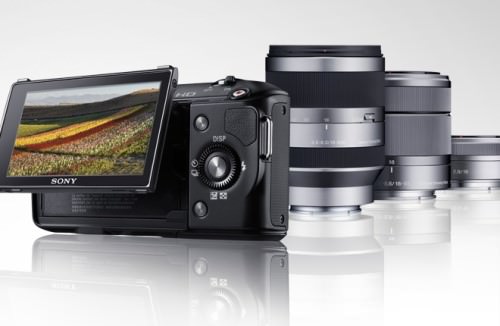 The 16mm f2.8 lens is good for wide-angle shots, but tests have proven that it is not the best optically and it is definitely limiting as a general purpose lens. Who needs wide-angle shots all the time? The 30mm f3.5 macro lens is useful as a walk-around lens. 30mm is about the same as 50mm on a film SLR or full-frame digital. It produces a “normal” perspective just a few millimeters away from how the human eye sees the world. The problem with this lens is that it can’t produce desirable field of view effects because the aperture is slow.

The good news is that the Sony NEX-7 can accommodate just about every 35mm rangefinder lens under the sun with adapters. This is a great feature if you are upgrading from a film SLR system and you have a collection of old manual focus lenses. While the amount of versatility offered by the system—which is provided through a wide range of adapters—there are a few downfalls to the system. While using an older non E-mount lens, you cannot autofocus and you have to adjust aperture manually.

Adapters for the E-mount are even hit or miss. There are very few adapters that work well with Canon mount lenses. To increase lens options even more, Sony offers an LA-EA2 Alpha mount autofocus adapter that allows you to use any Alpha mount lens with the NEX-7. It is a little pricy ($399) and it really makes the camera body look bulky.

The Sony NEX-7 is a great little camera. Image and video performance are excellent for an APS-C sensor camera. The three-dial interface it offers puts control over exposure settings right where they need to be. Controls are customizable. The electronic view finder is a first for Sony and better performer than anything seen yet. 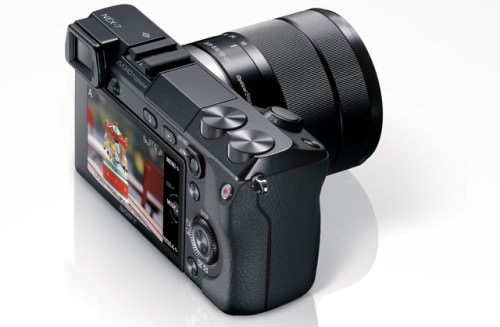