Dallas Photojournalist Captures Photo of Gunman Staring Down His Camera, Before Getting Shot At 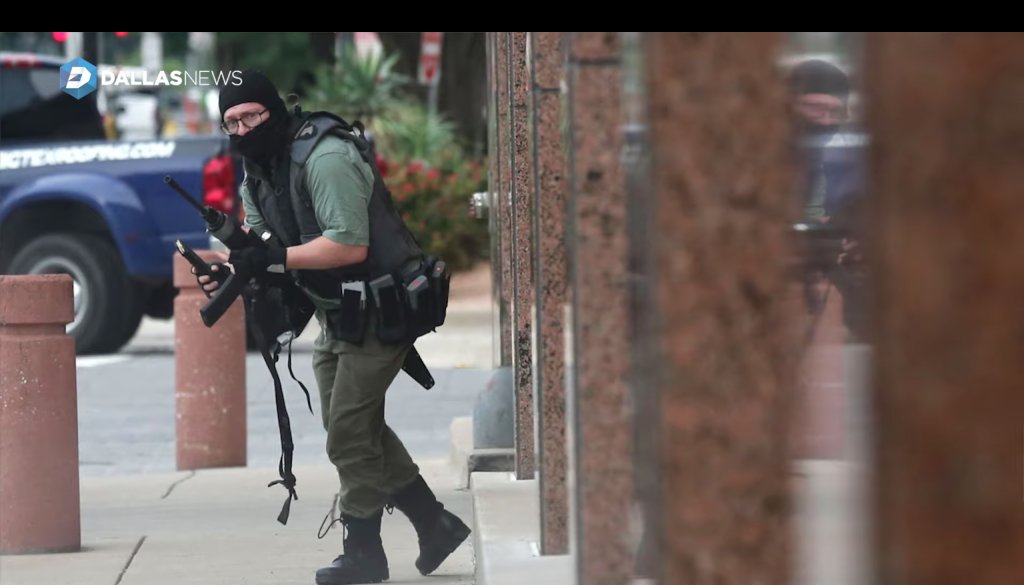 Many are calling for a Dallas-native photojournalist to be the next winner of a Pulitzer Prize for breaking news photography after his encounter with a masked gunman outside a federal building in Texas yesterday.

Tom Fox, a veteran photojournalist with the Dallas Morning News, happened to be outside the Earle Cabell Federal Building yesterday covering a charter school fraud trial when a masked gunman opened fire around the corner.

Fox saw the gunman round the corner and said his journalistic instincts kicked in and he started shooting the gunman while the gunman picked up a clip.

Fox shot for a fraction of a second before he started running, thinking he was going to be shot in the back.

Someone in a nearby skyscraper captured the masked gunman on camera. In the video, you can see Fox hiding not 10 feet from the gunman, before either the gunman or the responding police shoot above Fox's head.

Someone in a nearby skyscraper captured the masked gunman on camera. In the video, you can see Fox hiding not 10 feet from the gunman, before either the gunman or the responding police shoot above Fox's head.

The shooter, 22-year-old Brian Isaak Clyde, was later shot dead by the police.

"I just kept thinking, 'He's going to look at me around that corner and he's going to shoot. I just stood there and prayed that he wouldn't walk past me," Fox said.

"Because if he walks past me and sees me, he's going to shoot me. He's already got the gun out."

Instead of fleeing to safety once the cops arrived, Fox instead chased them down the street to capture photos of the arrest.

Fox previously won a Pulitzer Prize for Breaking News Photography in 2006 while covering Hurricane Katrina. This, many are thinking, may be his second.