What is a Cinema Camera? 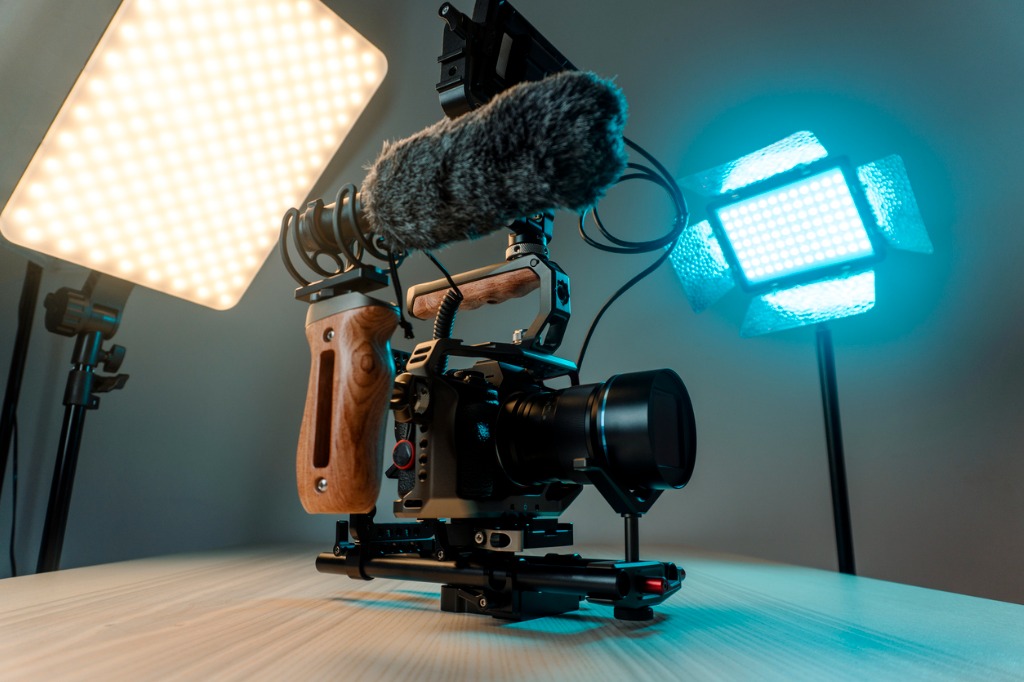 photo by Jacek_Sopotnicki via iStock

Photographers with newer DSLRs and mirrorless cameras are often eager to try out the amazing video modes on these cameras. As we get more comfortable with their videography capabilities, we recognize that our cameras may not have all the features and capabilities we’re finding out we want.

What is a Cinema Camera? 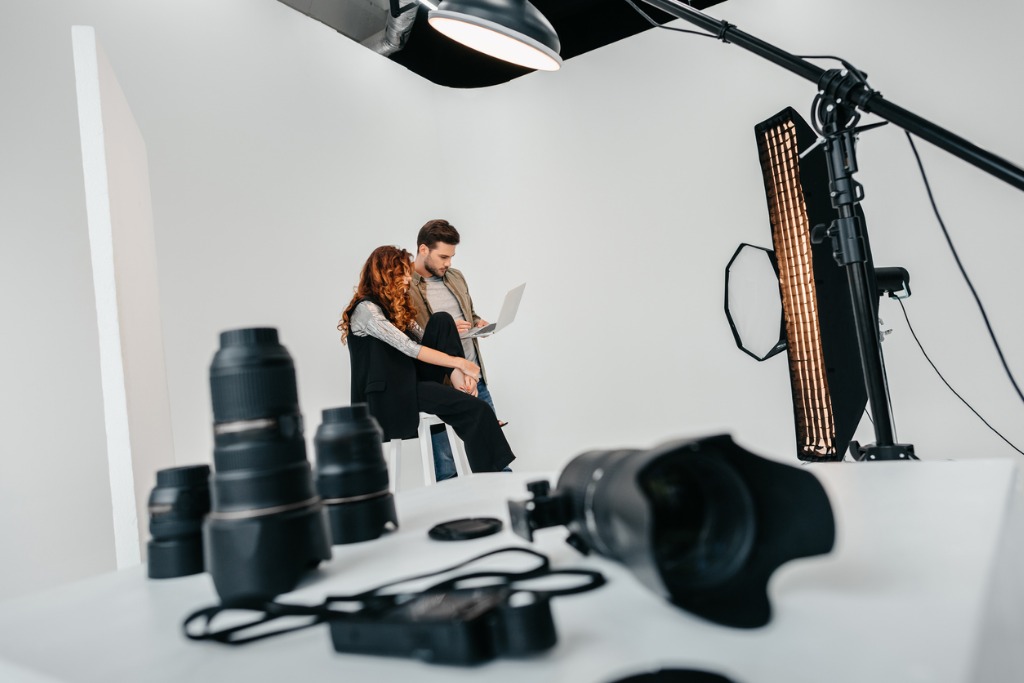 photo by LightFieldStudios via iStock

What is a cinema camera? A digital cinema camera is optimized for capturing moving footage over stull images. A major difference in making this happen is how the shutter works. The two main options are rolling shutter and global shutter.

The mechanical shutter of a DSLR is left open to expose the sensor since the shutter blades would interfere with the continuous recording of digital information.

In motion picture cameras using film, which do still exist, especially in larger film formats, a rotary disc shutter is used to expose frames as the film moves through the camera. In more sophisticated cameras, the angle of the opening is adjustable, which helps with exposure calculations.

Both methods are excellent for videography; the differences have to do with how rapid action may appear and how the footage is processed both in-camera and during post-processing.

Features of Cinema Camera Vs DSLR or Mirrorless 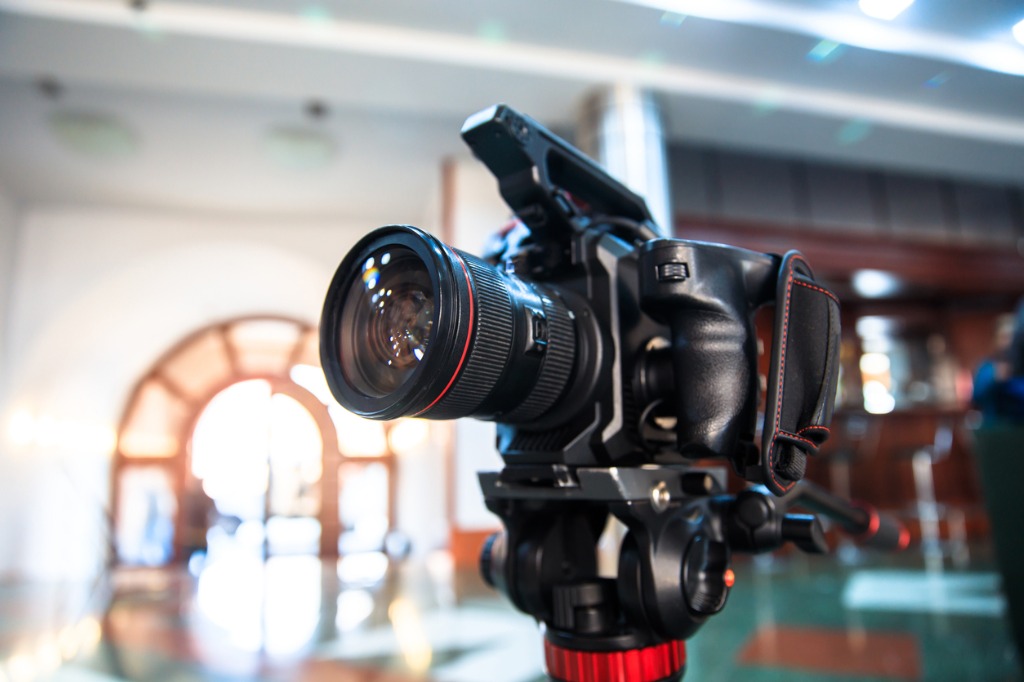 photo by Daniel Tadevosyan via iStock

Even with the fantastic videography capabilities of newer DSLRs and mirrorless system cameras, there are still areas where most of them are lacking as far as desired cinematography features.

Did that sound like a foreign language or a sci-fi movie script? Those are features that are important to professional cinematographers and other advanced videographers. Just as we prefer 12-bit and 14-bit data conversion over 8 bit and RAW files over JPEG for capturing the most information to use for our still images, these features and functions assist filmmakers to capture the best footage.

Some of these functions don’t mean much for still images, but they can make a huge difference in how a video recording handles color values, contrast, exposure variation, and the video resolution, which is different from purely sensor resolution.

Not to be overlooked is the camera’s audio capabilities and controls. Higher-end DSLRs and mirrorless may have better audio recording than others, but almost all cinema cameras have purpose-built features for better quality and fine-tuning the results. 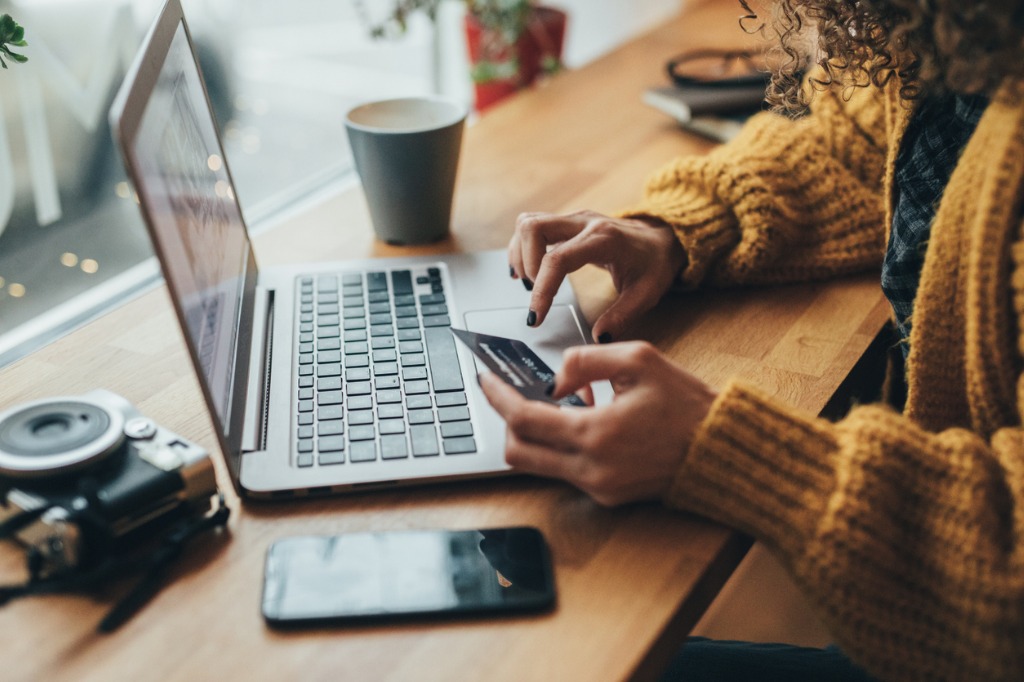 Now that we have a good idea of what is a cinema camera vs DSLRs or mirrorless, it is worth noting that purpose-built cinema cameras tend to cost more than many of our prosumer level cameras.

They’re not outrageously expensive, but it is a hefty professional-level investment to acquire a cinema camera. In part because of all of the added accessories that are used to craft videos and ease the videography workflow. Accessories such as a camera cage, high resolution monitor, follow focus system, matte box, wireless transmitters, and so on.

As with buying higher-end still cameras and lenses, we can ease the budget hits for videography gear by buying used equipment from a quality used gear retailer. When you stick to places that are run by knowledgeable and caring experts, such as our friends at MPB.com, you can be assured of getting cinema cameras that are in great condition and even have a limited store warranty. 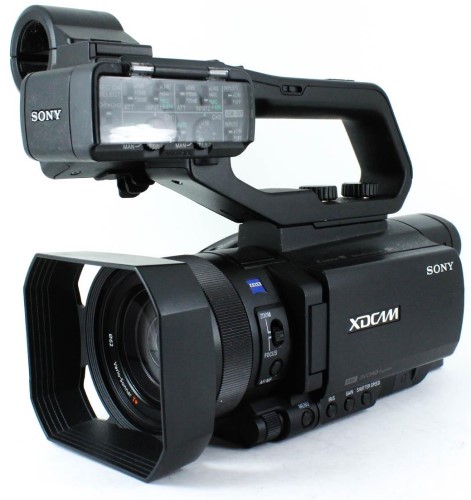 Browsing through the stock of used videography and cinema cameras at MPB.com, we see a wide variety of cameras with great videography features and quite a few price points for a variety of budgets. 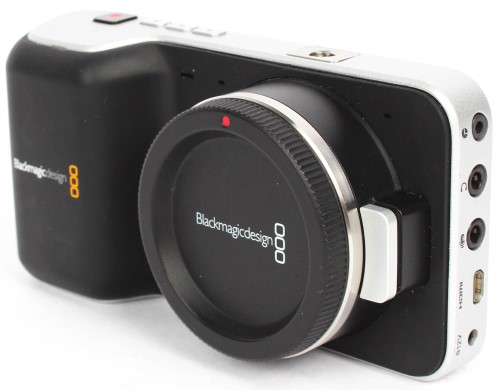 A very budget-friendly cinema camera is the Blackmagic Pocket Cinema Camera from Blackmagic Designs. It has an MFT lens mount, records Full HD as a Super 16 digital format camera, and records in Cinema DNG RAW.

Canon cinema cameras have a great reputation among digital cinematographers and there are many levels  of cameras available with built-in lenses or interchangeable lenses in the Canon EF mount. 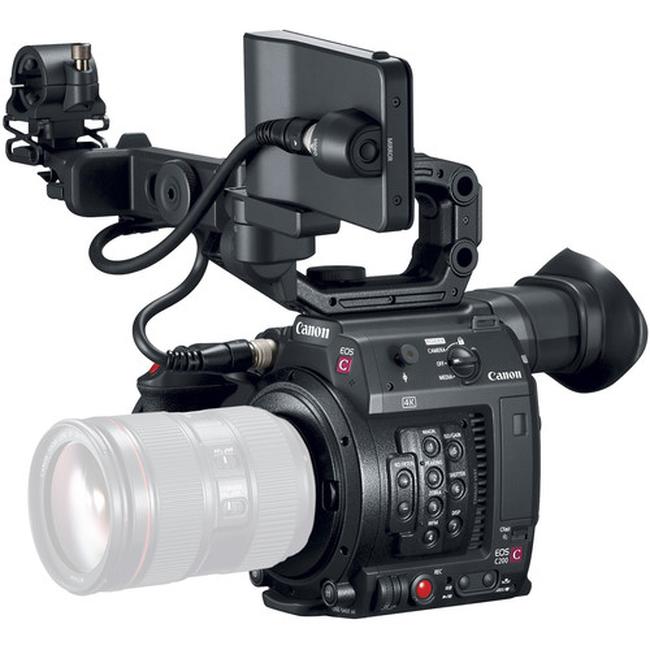 The Canon Cinema ES C200EF features 4K recording, a Super 35mm sensor, dual pixel autofocus, and the capability to use EF mount lenses and their line of cinema lenses in the CN-E lens mount. The price is similar to other Canon mid-level professional still cameras. 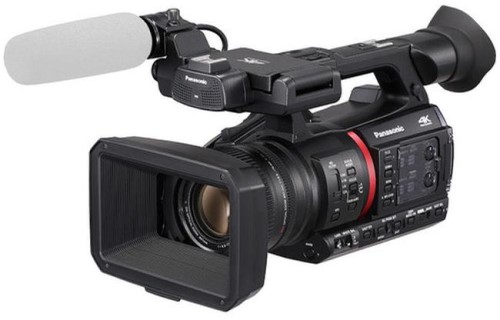 Panasonic cinema cameras include the many Lumix models plus the Panasonic AG-CX350 4K Camcorder which is more like a broadcast-style camera with 4K recording and variable frame rates. It is priced similarly to the Canon C200 listed above. 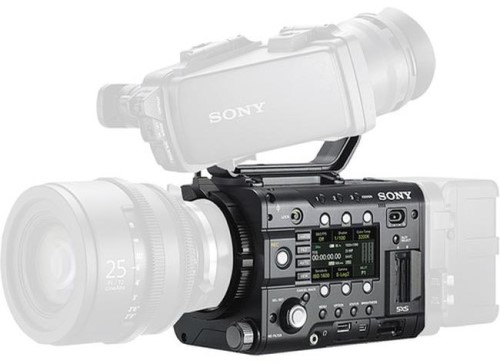 Sony cinema cameras have ruled small and large production companies for decades and for good reason, they are great cameras. The Sony PMW-F5 is an example of a very high-end broadcast level camera in Super 35mm format, taking lenses in two mounts, FZ mount and PL mount. The price is in line with a high-end professional still camera. 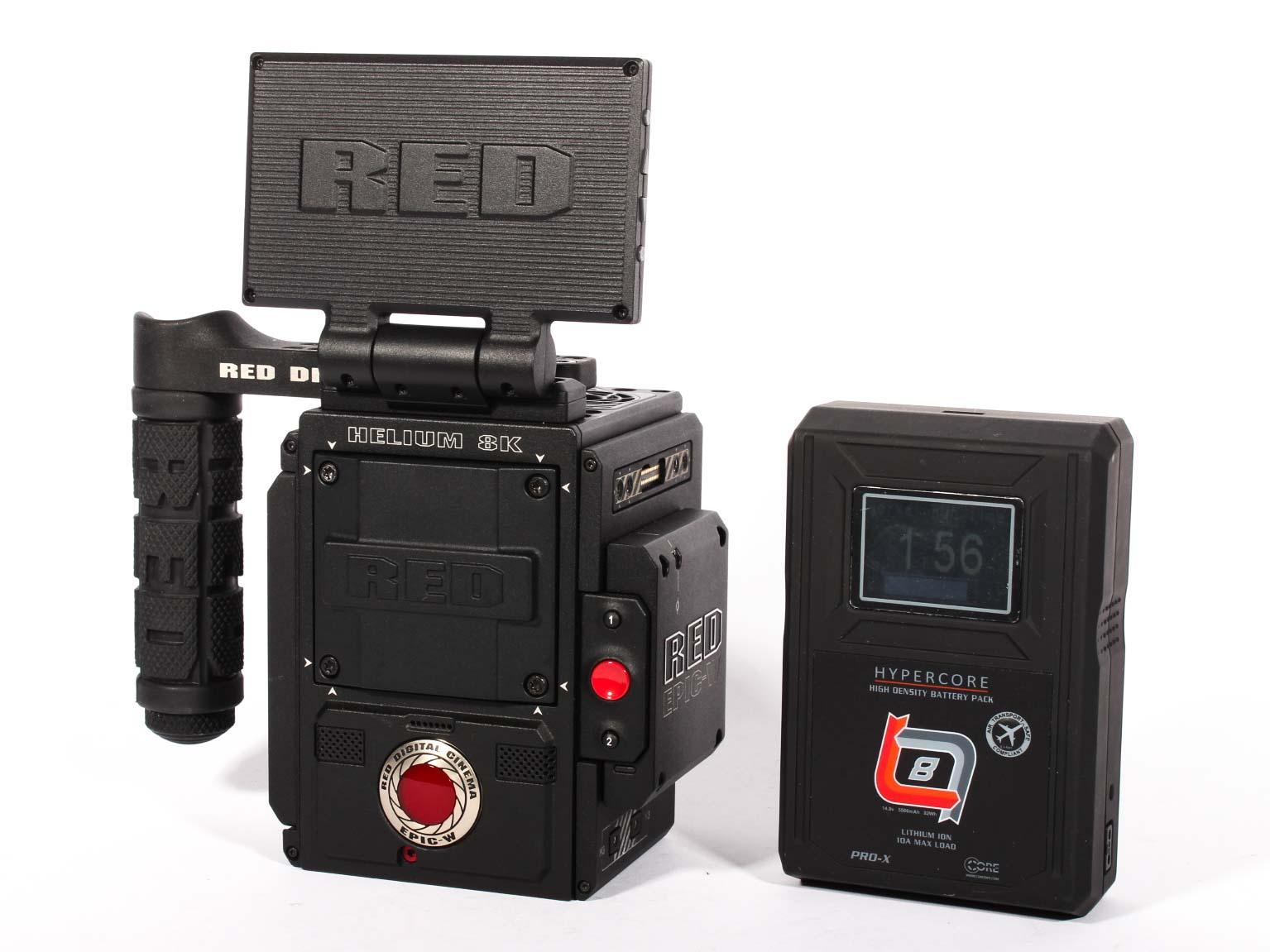 If you have the budget room, the RED cinema cameras are very capable and very high-quality professional cinema cameras. The features and recording quality of many of these cameras are in line with cameras used in large-scale film and TV productions. The RED Epic-W Helium 8K Kit is an amazing tool, offering 8K recording and a full range of professional features.

Now that you know the differences between what is a cinema camera vs a DSLR or mirrorless camera, you will have an idea of which way you may want to go for your own high-quality videography needs.

The used stock at MPB.com changes frequently, so some of these links may take you to a placeholder page with links to current cameras in their inventory. Have fun browsing and deciding!