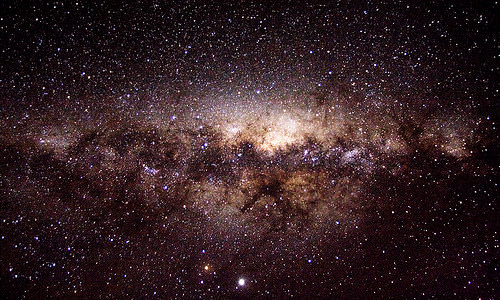 Digital photography is a marvelous tool that allows you to record and relive the world around you. This could include the tiny features of insects and flowers in your backyard and the overwhelming immensity of the night sky. One of the most exciting photography adventures is to capture images of the Milky Way Galaxy, in which the Earth resides. Although the right equipment and exposure settings are critical to taking such pictures (see Part 1), your success also depends on where and when you try to shoot the Milky Way and how well you use the various techniques in this two-part PhotographyTalk.com article.

Ambient light contributes very little to “wide-field astrophotography,” so you want to control focus manually and set the lens at infinity. Disengage auto-focus and, in combination with an ultra-wide-angle lens, you’ll have so much depth of field that you will be able to include the foreground, and cause both it and the star field to appear in focus. If you don’t have the optimum lens for maximum depth of field, then refer to a depth-of-field calculator to determine the exact range, so you can compose an image with some portion of the foreground and sky in focus. Another option is to make the horizon the foreground, which will make it even easier to render everything sharp within the depth of field.

Since most people live in urban areas, they seldom see the sky as humans did thousands, even hundreds, of years ago. The reason is all the artificial light that illuminates streets, parking lots and tall buildings, and is generated by millions of commercial signs. Even for casual, amateur stargazing, you must travel as far from the city as possible. To photograph the Milky Way in all its glory means picking even more isolated and/or wild locations where no light pollution invades the sky. Remember, your camera and its sensor are typically capable of recording more light than your eyes can see, so the very best locations are islands, high altitudes in the mountains, great deserts or the open plains hundreds of miles from the closest city or even small town.

Of course, most people, and even many serious photographers, find it difficult to travel to such faraway places, except maybe once. If that is simply not an option for you, then the next best strategy is to travel as far from any source of artificial light as possible. If you live in a large or significant-sized city, then not only do you want to be over the horizon, but also even further, in some cases, because light can radiate from below the horizon into the sky and negatively affect your images. Generally, the horizon is approximately three miles from eye level near the ground, but the higher your point of view, the further the perceived horizon. For example, if you were standing on a hill or the top of a tower 100 feet above the ground, the horizon would be approximately 24 miles in the distance.

A bit of experimentation is required because if you live in the northeastern corridor of the U.S. (Baltimore, Philadelphia, New York and Boston), for instance, then the light cast from these very large cities overlap and extend much farther than if you lived in Las Vegas, which is both smaller and a considerable distance from the next large city. It all depends on how much you want to experience astronomical photography and shoot images that are similar to the best of the Milky Way.

Although, it may seem obvious, you don’t want to attempt photography of the Milky Way when the moon is in the sky. Check the moon calendar for the new moon in the location where you’ll be shooting, so the moon is shining on the other side of the globe.

If photographing the Milky Way is just not “in the stars” for you today, then it could become much easier in the future, as camera manufacturers continue to design lower-priced DSLRs with greater ISO ranges. There’s no reason to wait, however. Do the best you can with your equipment (or rental equipment) in your locale. It will be a good, initial learning experience that will prepare you for any rare opportunities to travel much farther to capture incredible images of the Milky Way.