How to Photography: Lose Your Fear of the Flash 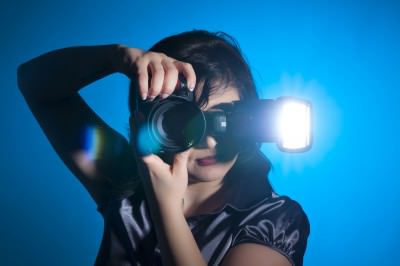 A point of maturity for many photographers is when they are ready to lose their fear of the flash unit and take control of this helpful light source. As mentioned thousands of times in photography tutorials and other educational materials, photography is light. It’s not just the natural light on which you rely to light a scene or subject. The source of the light that is what actually creates an image (whether film or digital) can also be artificial, in the form of a flash unit.

For the purpose of this article, a flash unit is a separate piece of equipment, often known as a strobe or speedlight, which mounts to the hot shoe on the top of the camera body. Some cameras have built-in flashes, many of which pop from the body when activated. These are fine, but limit how much control you have over the light. This article will concentrate on the use of a separate flash unit.

Understanding two specifications of flash units is important before you start learning how to use one effectively. First, is sync speed, which is the shutter speed you must select on your camera, so the duration the shutter is opened allowing light into the camera is “synchronized” with the duration of the flash of light. In most cases, the camera’s shutter must be open for more than 1/125th or 1/250th of a second. This is an important specification to check before buying a flash.

The second specification is iTTL or eTTL. The first, or iTTL, is Nikon’s name for this capability, or Intelligent Through-The-Lens. The second, eTTL, is Canon’s version, or Evaluative-Through-the Lens. In simplest terms, these systems read the exposure of the image before the flash is fired. A tiny amount of almost invisible light during a very short duration briefly illuminates the scene or subject allowing the camera’s meter to determine the correct exposure and amount of light the flash should emit.

Since this article assumes you have a DSLR camera with a hot shoe that will accept a separate flash unit, the best choice of a flash is one the camera manufacturer also makes. If you shoot with a Nikon DSLR, then select one of Nikon’s flashes; Canon DSLR, Canon flash, etc. You’ll know that the flash was designed and built to be absolutely compatible with your camera and you have the full support of the manufacturer for its product.

There is no value investing in a separate flash unit for your DSLR unless you plan to use its full capabilities. It’s time to “graduate” beyond pointing a flash directly at a scene or subject and flooding it with what is harsh, ugly shadow-producing light. The techniques you want to learn is how to use a flash to complement existing ambient light to create an evenly lit image that looks natural and hides the fact you used a flash at all.

For example, you are shooting in a room with fluorescent lights. Fluorescent light creates a pale, ghastly, seasick green hue. Without the right piece of gel on your flash, a Window Green gel in this case, you will have images with white subjects and that awful green color cast on whatever part of the image is mostly lit by the ambient light source. You can’t fix this disaster in editing software because without the gel, the ambient light (fluorescent) and the light of the flash will be two different color temperatures.

As mentioned above, the best way to learn how to use your flash is…to use it. Experiment with the different settings and compare the images they produce and you’ll quickly mature into the photographer who knows how to control light and, therefore, take better pictures.