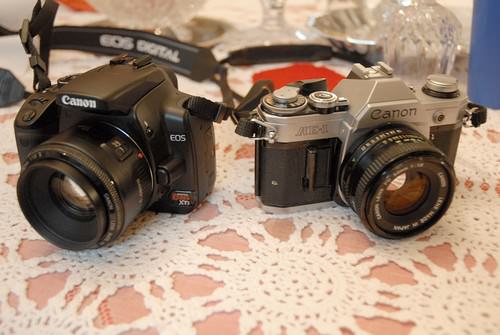 No doubt, another company would have developed the technology that has given the world digital photography, but Canon did it first with the introduction of its AE-1 camera during 1976. It included a microprocessor to focus and set exposure time, automatically. The world of photography changed forever. Before it reached that pinnacle of success, however, Canon had to struggle from its founding during 1933 and throughout World War II and afterwards. The early period of its story can be found in Part 1 of this PhotographyTalk.com article. Part 2 continues the story from the 1970s to 2011, as it has made a name for itself as an optical innovator, a global manufacturer and the number one camera maker in the world.

When Canon found itself floundering during the early 1970s, the founder, Takeshi Mitarai, approved of the significant changes to management and sales practices that the company’s managing director, Ryuzaburo Kaku, wanted to make. It was under Kaku’s leadership that Canon brought that first 35mm camera with a microprocessor to the world. He was also responsible for giving Canon a marketing “backbone,” launching an aggressive advertising campaign to sell the AE-1. By 1981, the camera’s popularity was unmatched. Kaku also implemented a process to develop and market new products quicker, such as 1975’s laser beam printing process and 1976’s retinal camera that eliminated the need to use pupil-dilating drugs.

During the 1980s, Kaku, who was now Canon’s president, continued to push the company’s research and development and manufacturing experts to create new products, and thus open new markets. Canon introduced the first personal copier during 1982. Users were now able to replace the cartridge, without the need for a technician, because built into the cartridge were all the vital reproduction parts.

This expansion also included integrated office workstations and desktop publishing systems. Now, Kaku’s aggressive strategy put Canon in direct competition with IBM, Xerox and Ricoh. These companies were leaders in their respective fields, but within a year of introducing an electronic typewriter during 1982, Canon had grabbed 11 percent of this market, while IBM fell from 26 to 17 percent. Then, Canon went head-to-head with Xerox during 1983, with a comparative laser printer that cost a third of Xerox’s. Canon also fought Ricoh for a bigger share of the facsimile machine market.

Kaku and Canon also recognized how dominant personal computers could become, so the company began developing optical integrated circuits. Another savvy move was striking a deal with Apple to market its computer products in Japan. That led to Apple asking Canon to supply the chips for its new NeXT computer. Not only did Canon drive revenues with that deal, but it also bought a 16.7-percent interest in NeXT and the exclusive rights to sell it in Asia.

Canon’s foray into these other markets may have caused it to slip to the second camera manufacturer in the world, but it quickly regained its leadership with the EOS (electronic optical system) auto-focus SLR during 1987, and then the high-end EOS-1 auto-focus SLR during 1989. With all this innovation and aggressive marketing, Canon’s annual sales increased sevenfold from 1975 to 1985.

During the early 1990s, however, the company’s growth slowed considerably. It experienced a similar phenomenon as Nikon, in that the global camera market was saturated with products; plus, Canon’s cameras had matured without a new generation yet ready for the marketplace. Both Nikon and Minolta suffered much more from the over-saturation of the market and the introduction of compact cameras during the late 1980s. These companies’ camera sales were nearly half of all their revenues, while Canon cameras were only 20% of its gross revenues during 1992. Canon responded to the popularity of compact cameras with its Sure Shot model, which grew into a comprehensive line of products.

Still second to Fuji, as the world’s biggest camera manufacturer, during the early 90s, Canon stayed aggressive. It finally decided to enter the bubble-jet printer market during the mid-1990s and was successful with a number of products. One of its engineers had accidentally created this technology during 1977. During the first decade of the new century, Canon advanced digital camera technology even further and regained its top spot in that market. As of 2010, Canon had 19 percent of the worldwide camera market, compared to Sony’s 17.9 percent and Nikon’s 12.6 percent.