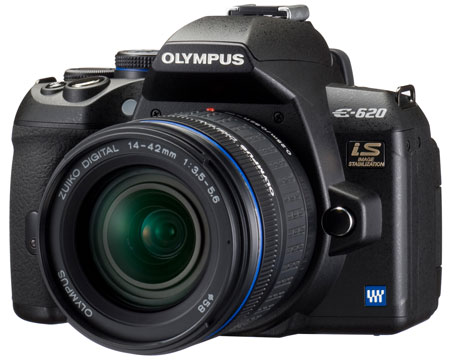 Olympus has made a living in the entry-level DSLR market, having been one of the first manufacturers to introduce two cameras into this niche: the E-410 and E-510, which were later redesigned as the 420 and 520. With the new E-620, Olympus is even more prepared to battle other cameras in this market segment, such as the Canon 500D. Olympus has outfitted the E-620 with a number of features from the company’s more costly E-30, but has been able to put them into a smaller camera body that is reminiscent of the E-4X0 series, which includes the E-420, the smallest DSLR in the market.

The E-620 wouldn’t be much of a competitor unless it improved some of the primary flaws of the E-520. The E-620’s viewfinder is a bit larger and the information panel is now in a more convenient location just below the view screen. Other outstanding features of the E-620 include:

What may give the Olympus E-620 the greatest advantage over equivalent DSLRs is how close it comes to the bigger, more expensive Olympus E-30. There aren’t many features differences between the two cameras, but they make for an excellent method to compare them before deciding which to purchase.

Read Part 2 of this PhotographyTalk.com article for additional information about the Olympus E-620 DSLR camera.