Lighting a Wine Cellar with a FirstStudio Kit 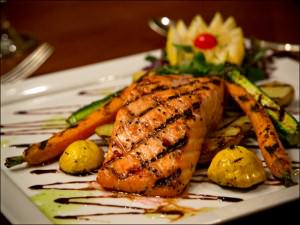 Even the most interesting and elegant architectural interiors, which are visually pleasing in person, may lack depth and drama in a photograph.

Hollywood lighting directors often spend four to five hours placing 15 lights to achieve their goals. Still photographers face the same challenge, but the solutions have to be quick and less complicated.

In this lesson, Photographer Ben Clay uses a classic approach and a very simple lighting kit to add depth and interest to the wine cellar of a historic hotel. His technique of working with the ambient light of the room, and adding contrast where needed, can be used by realtors, architects, builders, or anyone wishing to improve their interior photography.

I recently had the opportunity to photograph a beautiful wine cellar dining room at the Mountain View Grand Hotel, which is nestled among the White Mountains of New Hampshire. The hotel, which has been in operation since the end of the Civil War, has sprawling grounds and is very picturesque, both inside and out. I had brought along some simple lighting equipment in case I had the opportunity to shoot indoors, which fortunately, I did. [Figure 1]

After speaking with Managing Director Chris Diego and Guest Relations Director Monica Blessing, we came up with an impromptu plan to take some shots in the wine cellar and have the hotel's Executive Chef, Brian Aspell, create a signature dish for an appetizing prop. The main obstacle, however, was time: we wouldn't have a lot of it to shoot, since everyone was preparing for that evening's dinner service.

The first thing I did was go down to the wine cellar and take a few snapshots to get a sense of where I'd be shooting. Due to the time restrictions, I decided to shoot in just one general area to be as efficient as possible. Although the recessed lighting added a nice quality of light to the room, I knew I wanted to add some more lighting to add shape and tone down the overall contrast. [Figure 2]

When it comes to photographing interior room scenes, the challenges you face can range from minimal to extensive. Much of it depends on the amount and quality of available light, or lack thereof. Sometimes you don't need any additional lighting equipment and other times it's absolutely essential. After assessing the lighting conditions in this wine cellar, I knew that the modest gear I had with me would work beautifully.

Once my general plan was in place, I went out to the car and retrieved the lighting gear, which consisted of a First Studio Portrait Kit, some extension cables and a rolling Single Kit Transpac Case. Here's the extent of the lighting gear laid out on the floor. [Figures 3 & 4]

The FirstStudio Portrait Kit includes two FirstStar heads that use 250-watt tungsten bulbs, which is ideal when you're working with other lights that are the same color temperature, such as these tungsten recessed lights. Had I been using strobe lighting (5500K), I would have needed to place warming gels over them to balance the color temperature of the house lights (around 3000K). This First Studio kit was a simpler solution.

Setting White Balance with a QuickDisc®

Setting a custom White Balance is quite simple and highly recommended when you’re shooting in an environment where the lighting is not precisely matched to the preset choices in your camera menu. Although all camera models have a slightly different set of commands, the approach is the same and can be found in your owner's manual under “Setting White Balance”.

Once the Custom White Balance setting is enabled, you position a color-neutral target like the collapsible QuickDisc® so that it is illuminated primarily by your main light, fill the camera frame with the target, and then press the shutter. The WB setting will remain in effect until you create a new setting or choose an alternate preset.

I knew I wanted the food to be lit with broad light to counteract the hard quality of the recessed lighting, so I decided to angle one FirstStar head up and bounce light off the white ceiling. This would give me a broad top light that would work well for the table in the foreground. I moved a nearby table over and positioned a stand-in plate for a test shot. [Figures 5 & 6]

In reviewing the result, I wasn't happy with the dramatic tonal shift from the foreground to the background. The elements were too separate from each other. So I decided the white tablecloth had to go. But rather than stay with the square table, I decided to swap it out for a round one so that its curved edge would help with the composition. Once the elements were in position, I took another test shot, this time with a vertical crop. [Figures 7 & 8]

For the background light, I mounted the other FirstStar head to the other LiteStand and then attached the umbrella to it. Bouncing light off the umbrella would be similar to bouncing light off the ceiling, but here I would have more control over the direction and angle of light spread. I positioned the light low on the LiteStand just inside an adjacent room (out of frame) and angled it evenly through the doorway. [Figures 9 & 10]

One of the nice things about working with continuous lights is that you can see effects of your lights in real time. Before taking the next test shot, I could see that the light quality had improved dramatically. Monica and I added some table glasses and flatware to the table, lit a few candles, and then I took another shot. [Figure 11]

As you can see from the result, this second light helped to illuminate and give shape to the background elements of the shot. With the lighting in place, I was almost ready for the food and wine. When it comes to shooting freshly prepared food dishes, you only have a small window of time before the dish starts to lose its "fresh factor". That's why it's good to be as prepared as possible before it arrives so that you can just shoot away when it does.

In the few minutes we had before the dish arrived, Monica poured a glass of white wine and a glass of ice water for the table, while I reviewed the last test shot on my computer, which I'd brought along and set up in an adjoining room. [Figure 12]

Ordinarily, I would use a tripod to shoot interior shots like this to help me fine-tune my compositions and eliminate the risk of camera shake at lower shutter speeds. But in this situation, where I wanted to get a variety of angles in a short amount of time, I decided to shoot handheld at a higher ISO setting, which would allow me to use a fast enough shutter speed to prevent camera shake.

I shot with an Olympus E-5 DSLR and a Zuiko 12-60mm lens (24-120mm equivalent for 35mm film) at various focal lengths. Here were the internal settings for all the shots:

Suddenly, a stunning plate of food arrived: Grilled seasoned Alaskan salmon on a bed of herb-grilled fingerlings with assorted baby vegetables over a molasses glaze, topped with a grape seed/cranberry vinaigrette and garnished with chive oil. YUM!

I got started right away with some tight shots of just the food on the plate while it was still fresh. I zoomed in all the way on the lens (60mm) to minimize the depth of field, focused on the front section of the salmon, and took a series of shots. This one ended up a favorite. [Figure 13]

Next, I shot at a wide angle (20mm) to capture both a top view of the plate and a broad look at the room. As you can see from this result, the additional lighting equipment lit the plate beautifully, complimented the recessed lighting and candlelight nicely, and balanced out the overall tonal levels of the room. [Figure 14]

I then decided to come in lower and a little tighter (29mm) on the table setting to focus primarily on the glass of wine, since this was a wine cellar. Note how at this tighter focal length, the depth of field is shallower and the background elements are rendered more out of focus than in the previous shot. Remember that the aperture setting, which also affects depth of field, did not change throughout the shoot. [Figure 15]

I happened to notice the reflections in the high gloss table and decided to work those more into the composition, as well as to capture more of the recessed lights in the ceiling. Monica also swapped out the white wine with a more colorful rosé. When everything was in place, I backed up slightly, refocused and took another shot. [Figure 16]

Monica was thrilled with the results and the variety of angles she had to choose from and was excited to have new images to promote the restaurant and dining room.

Shortly after this series of shots were taken, the wait staff began to arrive to begin preparations for that evening's service. The shoot was officially complete. I thanked Monica for her help with the shots, packed up the gear, and helped put the tables, chairs and tableware back how we'd found them.

TIP: If you ever shoot on a location like this, it's always good to take some snapshots of the area you'll be working in BEFORE you start working so that you'll have a reference point in putting things back together AFTER the shoot. People are appreciative when you're respectful of their space, and leaving a place the way you found it goes a long way in establishing trust with them. And truthfully, if I hadn't taken pictures of the place settings, they would not have gone back together so elegantly!

As is evident from this shoot, you don't have to use a ton of gear or have that gear be overly sophisticated to create beautiful lighting indoors. After all, light is light, and once you know what it can do and how to work with it, you can achieve amazing things.

Remember to experiment with your techniques, and above all, have fun in the process!