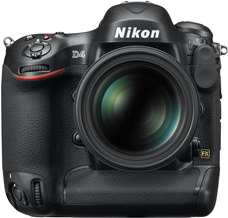 Many new products from major camera manufacturers were delayed during the second half of 2011 because of the floods in Thailand and then the earthquake in Japan. This meant the announcements and availability of products, especially DSLRs, were postponed until 2012. Some reports state that full production won’t return to the Nikon and Sony plants in Thailand until late February or early March.

1.   For Nikon lovers, the new D800 camera is what they are waiting to see. The rumor mill continues to confirm that this DSLR will have a 36-megapixel sensor, 3.2-inch LCD, 1080p Full-HD video and many other professional-grade and advanced features. Some sources think it will be announced at CP+, the Camera & Photo Imaging Show 2012 in Yokohama, Japan, February 9–12.

2.   The Nikon D4 camera may be announced as early as January 6, and could begin shipping by the end of the month. Its specs are reported to be 16.2-megapixel sensor, 11fps, the new Compact Flash XQD memory card slot and various other upgrades to the auto-focus system, processor and video.

6.   The 800-pound DSLR gorilla in the room from Canon is the 5D Mark III. Its announcement appears to be further into 2012, maybe the end of March or early April. Don’t expect to be able to buy it much before the beginning of summer.

7.   Canon will also be bringing the EOS Rebel T4i to the market during 2012. It’s likely to be announced before the CP+ trade show in February. Although specs were still sketchy, various sources are claiming a new 24-megapixel APS-C sensor, a DIGIC 5 processor and other upgrades.

8.   Sony’s new products for 2012 have been more difficult to predict because it was significantly affected by both the earthquake and floods. February/March is targeted for new NEX cameras and lenses, with more NEX products anticipated during April, May or June. Sony’s new DSLR, the a99, may also be announced during one of these months. It is rumored to have a 24-megapixel sensor and the availability of new lenses, including a wide-angle zoom, tele-zoom and new Zeiss 50mm f/1.4 and 500mm f/4.0. Peering further into the future, Sony may announce a new full-frame DSLR, with a 36-megapixel sensor, during the fall.

9.   Digital photographers will also want to be aware of new computer products for 2012 that are often critical imaging tools. At the top of the list are new MacBook Pro and Air models, including a possible 15-inch Air.

10.        According to the Apple grapevine, the iPad 3 could be announced during February or March. Its biggest improvement will be a high-resolution display.

12.        A beta version of Windows 8 may be released as soon as February, but inclusion with PCs probably won’t occur until the fall.