Moose Peterson: Famous for His Wildlife Photography, On a Mission To Save Every Species 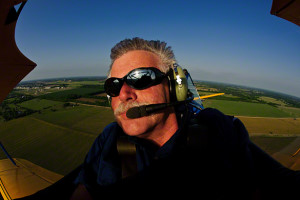 Of all the awards and accolades he has received during his more than 30 years as a wildlife photographer, Moose Peterson may treasure none more than being a recipient of the John Muir Conservation Award, Research Associate with the Endangered Species Recovery Program. Peterson’s passion is to photograph wildlife, especially in California, but his mission is to “preserve the wild heritage left to us to share with future generations.” As he stated during a 2010 interview, “Seven extinct species live now only in my files, that's wrong!”

While he has pursued his passion and advocated the preservation of wildlife, Moose Peterson has also been recognized as a Nikon Legend Behind the Lens and a Lexar Elite Photographer. In addition, his work has been published in more than 143 magazines worldwide; he has authored 24 books, including Captured: Lessons from Behind the Lens of a Legend; and he conducts workshops throughout the U.S. sharing what he has learned with thousands of aspiring photographers. If sharing his wildlife photography techniques can be considered his second mission in life, then it also serves as a means to promote his first. Some are not always pleased with Peterson that he is so willing to share his secrets; but he says staying focus on spreading the word about wildlife preservation allows him to move past any criticism he may receive.

Of the many pointers he shares with his workshop students, Peterson says the primary mistake of many photographers, especially those who want to excel at wildlife images, is that they don’t give themselves enough time. What he means is the time to learn; to grow; to break through any self-imposed, peer-imposed or industry-imposed limits; and to reach for yet another lofty goal. He thinks more photographers should adopt his mindset, which is that he never considers himself at the pinnacle of his profession. The “fire in his belly” continues to burn hot because, even after 30 years, he knows he could be better.

In terms of specific shooting techniques that Peterson prefers, one that will surprise many is that he does not edit any of his JPEG files of wildlife. His reasoning refers, again, to his mission. He believes wildlife images should be equally preserved in their original form, making them an accurate record of the animal and what transpires within the frame.

He also exclusively crops in the camera, never on the computer. This has more to do with how he was taught photography and his early experience in the industry; but he is quick to assert that every photographer should try to be as creative as possible with the camera before using editing software.

Moose Peterson’s equipment list is quite extensive, as you might imagine. Nikon dominates the list, since that has been his camera of choice for many years. He has even influenced that choice among other photographers by being one of the first pros to receive the Nikon D1 during 1999. He then became the first wildlife photographer to shoot exclusively in the digital format during its early years. He is also a primary beta site for all the major hardware and software manufacturers.

More recently, Moose Peterson has made aviation his newest photographic passion. Since 2008, he has been putting the same hard work and heart, mind and time into creating spectacular images of aircraft. He also hosts his Air2Air Workshops, teaching the specific techniques of aviation photography. Visit his Web site, warbirdimages.com, to see his gallery. Peterson’s main site is moosepeterson.com.

All photos provided by Moose Peterson