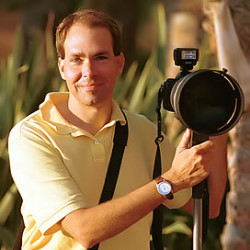 loves to break the rules. First, he started to use the Internet during 1999 as a private photography notepad! To be honest, compared to today, there wasn’t much happening on the Internet during 1999, so it isn't necessarily surprising that he used his Web site for this purpose. Internet searches by some surfing pioneers discovered his Web scribbles, and liked what they read. Even as Ken received feedback and attracted a growing audience, he didn’t change the information he provided or how he provided it. He was essentially still talking to himself! If others wanted to listen, then they’re welcomed; but don’t expect a fancy site drowning in advertisers’ links and be prepared to see plenty of pictures of his family and his life.

The second rule Ken Rockwell broke was he didn't sell out. As the popularity of his Web site increased, he could have made deals with digital photography manufacturers and vendors to receive free cameras, lens and other equipment and favor their products in his reviews. Now, Ken’s site does have a few ads/links (very few), but these are the photo equipment retailers from which he has always bought his equipment. When readers buy from them too, he generates some revenue from his site (He has two growing kids, after all!).

As he writes on his Web site: “Maybe I'm popular because I'm completely independent. I have no camera companies as advertisers, and I get no free cameras, or even prototypes. I say it like it is, not as camera companies want to hear it. I've never done anything to promote this site other than to spend 12–14 hours each day adding to it, and to keep you, my reader's, long-term best interests as my only concern. This is why my pages aren't cluttered with advertisements like commercial websites; I'm trying to make this site as easy-to-read as possible.”

By 2004, Ken Rockwell was able to work full-time on his Web site after many years in digital imaging in the broadcasting industry. By 2010, he was supporting his family with his site and had become “the world’s largest independent source of photography information.” This has only made his readers more loyal and continues to grow their numbers around the globe.

Even with all that popularity and a bit of fame, Rockwell doesn’t receive free cameras and lens, only an occasional accessory: filter, memory card, tripod, book. He says the only product Nikon ever gave him was a free pen at a trade show. He doesn't even receive loaner equipment to review and then return. He buys his own cameras, etc. or borrows them to write his reviews. He even warns his readers that they should never consider his opinions as endorsements, reminding them, “This site is a goof.”

Although Ken supports his family with his site, he freely admits that every photographer, including himself, would become better photographers if they concentrated on learning how to use their current equipment instead of reading his reviews and buying the latest whiz-bang products.

His site may be a “goof,” but Rockwell is serious about helping photographers improve their skills, and the images that come from their cameras. That is why he has added workshops to his schedule. During March 2012, he will be leading workshop attendees down the back roads to discover Olde Southern California and the remarkable places to photograph. Then, during April, he has scheduled a workshop for California’s Central Coast. According to Ken, it will be a great learning experience as well as a gastronomic pleasure, since the workshop will have its own chef! June 2012 will find Rockwell’s photography workshop on Oregon’s North Coast, and then he will be speaking at Photoact 2012 in Santa Barbara, California, August 24 and 25.

You’ll find all this information and be treated to the independent voice of Ken Rockwell on his Web site at kenrockwell.com.