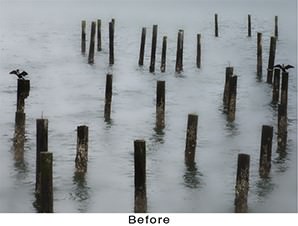 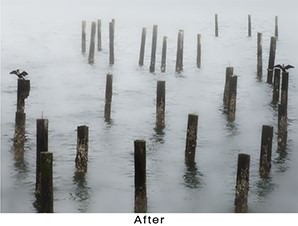 The Graduated Fog filter in Color Efex Pro 4, the second in the graduated series, simulates the use of the traditional glass filter that applies a strong softening effect. It can be used to create a more moody image, while adding some depth.

We will begin with a closer look at the filter controls in order to see how it works.

Fog Method offers a drop down menu that enables you to control the type of soft focus effect that is applied to the image. There are 4 Method options and Fog Method 1 is provided as a starting point.

The Opacity slider allows you to increase or decrease the effect of the filter in the image by controlling the overall strength. The default value is set to 80%, giving the image a pronounced effect to start with.

The Vertical Shift slider is used to place the horizon (or blend area) within the image and can work in conjunction with Blend. Moving the slider to the left will raise the horizon that has been added to the image, while moving it to the right will lower the horizon. It is set at 50% to begin with in the center of the image.

Tip: Try the Rotation slider by moving the slider all the way to the right or to the left to get a morning fog effect rising from a lake or valley floor for example.