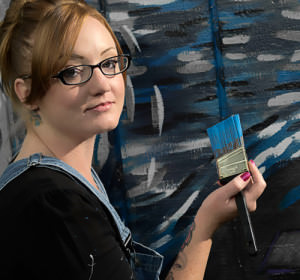 As photographers David Cross and Jeffery Luhn show in this lesson, there is much to be gained by opening our eyes to the intriguing scenes in our local environment.

David ‘discovered’ this mural of Van Gogh’s Starry Night on a fence in Aptos, CA. Hundreds of people, including myself, drive by the location often and never notice it. David saw the location and immediately began thinking of ways to use it for an interesting photo. He envisioned an artist as the model and the mural as the background. The painter of the mural couldn’t be located, so our co-worker Brandee volunteered to model as the artist. That was the starting point for this lesson.

The equipment for the shoot is pictured below. Although we brought a lot of gear, the only items used were: (figure 1)

Balancing Strobes with Dusk Light
We began setting up for the session at about 7PM. Assembly of the gear took about 10 minutes. To see the details of assembling a LiteDome® visit the Instruction Page.

David’s goal for the lighting was to keep it simple and concentrate on balancing the strobes with the ambient light for a natural look.

In this shot, the camera was set at 1/80sec @ f/4 using ISO 125. David had positioned Brandee about 20 feet from the fence to soften the focus on his background. I was instructed to hold the key light in a place that would achieve a Loop or Rembrandt lighting pattern, depending upon which way Brandee moved.

The color image below is a Loop. I’ve included a high contrast close-up of the lighting pattern to show how the Loop Pattern is formed by the shadow of the nose. (figures 3 & 4)

This alternative take shows the same lighting position but a slight move of Brandee’s face makes a Rembrandt lighting pattern.

A high contrast close up shows a highlight on the shadowed cheek that typifies the Rembrandt Pattern. David tilted the camera the opposite way and altered his framing for a different look. (figure 5 & 6)

In the next set of photos, Dave asked Brandee to lean against the fence for a close-up portrait and called for a Paramount lighting pattern. I positioned the key light directly onto the front plane of Brandee’s face and raised it to about a 45-degree angle above her eye level so the shadow from her nose fell halfway to her upper lip.

I was careful to follow the movement of Brandee’s face so the shadow did not fall to one side or the other, but remained centered. Dave’s model direction was very fast-paced and he managed to get about 15 good takes in less than 5 minutes.

This specific placement of the shadow from the model’s nose identifies the pattern as Paramount. The high-contrast close-up to the left shows the shadow of the nose more clearly. (figure 7)

The exposure was 1/60th @ f/4 using ISO 125. We were careful to maintain the same distance from the lights to the model as the previous shot, so the output setting remained at ½ power on the strobes. (figure 8)

In the setup shot below, you’ll notice that the LiteStand holding the hair light was leaned against the fence to achieve the desired position. This was necessary because the ground was very uneven at the base of the fence.

"Light on a Stick"

Dave held the LiteReach® by himself so I could step back and take the setup shot. Photographers call this technique ‘light-on-a-stick’ and use it as a way to achieve an attractive off-camera light source in mobile situations.

Note Dave’s technique for steadying the camera on his left shoulder as he uses his left hand to hold the LiteReach. Thanks to accurate auto-focus on modern digital cameras, photographers are able to manage accessories like this while shooting single-handedly. (figure 9)

One of the shots from Dave’s single-handed set appears below. The ambient light was fading as the sun set and the background was getting a little darker. Brandee remained well lit from the flash on the LiteReach, but the position of the key light needed to be elevated and moved to the right to achieve more separation from the background. (figure 10)

At this point I (Jeffery) took over principle shooting and refined the posing for this set. I asked Brandee to fully extend her arm to create a forced perspective composition, i.e. making the brushes loom large in the foreground. This change in perspective, which was aided by using an 18mm lens, allowed me to position her entire head in the area between the paintbrushes.

I directed Dave to move to my right and achieve a Rembrandt lighting pattern on Brandee. The Rembrandt pattern has an upside down highlight triangle under the eye on the shadow side of the face. (figure 11)

For a new a angle, I moved to my right and held the LiteReach®, while David took a setup shot. I use a different technique than Dave to hold the LiteReach®, but the result is similar. The LiteReach® is superior to a standard light stand for this application because it has dense foam grips for more secure hand-holding. (figure 12)

For the results shot below, I stood on a paint can to get a higher angle, which tends to work well with a wide-angle lens. (figure 13)

David posed Brandee for another shot to make her look like she was painting the mural. He later altered the shot in Photoshop to remove all the warm colors in the painting so as to make the artwork look incomplete. (figure 14)

We hope this lesson gives you some ideas of how to select a scene in your area and work with it to create some interesting images.