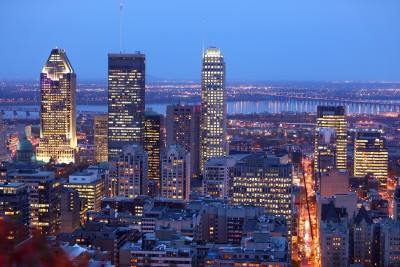 Sometimes you don't have a tripod or a park bench or a trash can to set your camera on to avoid camera shake. Or maybe you do have something available but it's too high or behind another object that would obstruct your photo. In these cases, the only option you have is hand holding your camera. At night, going hand-held is not recommended as your shot will often turn out blurry due to slower shutter speeds. But here's a few tips to getting sharp hand-held photos at night:

Knowing how to properly hold your camera can make a big difference. Many beginners will often hold a DSLR much like a point-and-shoot camera by holding the grip with their right hand and pinching the left side of the camera with their left. The classic way to hold a DSLR is by using your right hand to hold the grip and your left to cradle the lens. Keep your elbows tucked in and exhale before taking your shot. This will usually provide you with the best stability. Another grip you might try is the double grip. To do this you simply grip your right hand with your left. Some photographers say that this gives them a steadier shot.

Bump That ISO Up

Don't be afraid to increase your ISO in dimly lit situations. Increasing your ISO will increase the shutter speed, allowing you to have a much better chance of capturing a sharp photo. Keep in mind, however, that the higher the ISO, the more noise that will be visible. But a noisy shot is better than a blurry shot as there are numerous ways to reduce the amount of visible noise in a photo during post-processing, but there is no way to fix a blurry shot.

While the term “burst fire” may not be the best way to describe it, taking multiple shots in quick succession will give you a better chance of getting at least one photo that's sharp. Even at slow shutter speeds you can put your camera in burst mode. It simply won't be the kind of rapid click click click that you're used to. By doing this with low shutter speeds, you'll often find that your photos will all have a different amount of blurriness, and if you're lucky, you'll have one or two that are sharp.

Keeping it wide applies to two different aspects while shooting. This first is your aperture. Shooting wide open mean opening your aperture all the way up to let the most light in. So going wide would mean setting your aperture to its maximum setting whether that be 4, 2.8, or 1.4. The wider you max aperture is, the faster your shutter speed will be. Remember though that this will decrease your depth-of-field and may not work for the kind of shot you're after.