7 celebrities who are also photographers

We all know him for his love songs and long lasting musical career, but the truth is, he’s quite successful at photography as well. He has shot campaigns for Harper’s Bazaar, Esquire, British Vogue and the list could go on. It’s not really a surprise for anyone, but his portfolio contains pictures of A-list celebrities, and lucky for him, he is one! Have a look at his portfolio here.

He is actually a rather good architecture photographer. His passion for photography began way back when he was ten years old, when he was given a Nikon F as a present from his uncle, who was a photographer for the New York Times. He shoots mostly in black and white using classic, film techniques. Enjoy Moby’s architecture portfolio here.

The R&B singer is a well-known Leica fanatic and his style is focused most on portraits. His favorite subjects are his children and he believes that music and photography are complementary. See his work here.

He’s probably very little known for his activity as a photographer, and that might expected from a world famous rock star. Even so, his work was featured at one point in the Russian edition of Vogue. His style is based mostly on candid shots. Have a look at his work on his website. 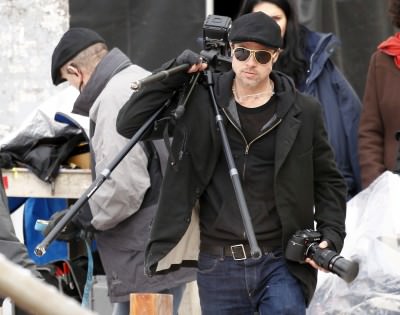 Obviously no introductions required here. Pitt is also a photography enthusiast who was commissioned by W Magazine to capture Angelina Jolie from a different angle. He shot everything in Kodak Tech Pan Film, which might not mean much to the regular digital photographer, but it’s in fact a very rare film that hasn’t been made for years. He might be in the only category of people who can still get their hands on it. His photos of his wife have a distinct, classic feel and the grain just makes everything better. Find his work here.

Probably best known for his role as The Dude in “The Big Lebowski”, Bridges is also a very interesting behind the scenes photographer. He takes his camera everywhere he shoots a movie and documents the set and the things you normally wouldn’t see. His very original work is available here.

The guitar player from The Police has a typical British style in both music and photography. His work is in classic, black and white documentary style, and he has published three photography books, all documenting the band while they were on tour. His work is surprisingly real and direct. See it here.