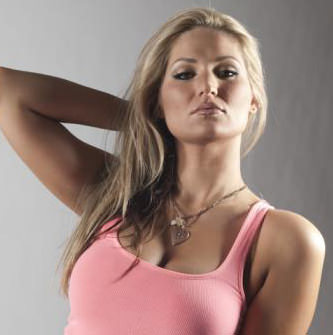 60 minutes for a photo-shoot that includes shots of the lighting setup isn’t a lot of time. But it’s a realistic benchmark for thousands of photographers who make a living in their studios.

Portrait professionals know that you have to be ready for walk-in work, whether it’s an executive portrait or a quick product shot. Developing familiarity with your equipment through testing and assignments such as this one will give you the confidence to complete a quick session with good results.

For this shoot, we didn’t have time to discuss the lighting in detail because the photographer was busy meeting the model, Vanessa, and making choices from her wardrobe. I hadn’t met the model, so I took a foolproof approach to the lighting by setting up one TritonFlash™ in an OctoDome® extra small on a Large LiteStand and another TritonFlash™ behind a 39x72 inch LitePanel with diffusion fabric. The OctoDome® was closer to the camera and the LitePanel was on the opposite side of the model and further away from the camera.

I avoided using two identical modifiers because I wanted each light to have its own character. This classic setup provides complimentary lighting no matter which way the subject is turned. The modifiers are soft enough to allow for freedom of movement from the model without the drawback of harsh shadows. There are millions of scenes in Hollywood films that are shot with this basic setup.

If you only have two lights for your setup, don’t make the mistake of most beginners by placing one light on each side of the camera in front of the model. That’s a recipe for crossed shadows and boring light. Think about using one light as your key light and the other as a secondary source to provide a rim highlight, hair light or separation light.

As a general starting point I suggest placing the key light approximately 6 feet forward of your model and about two feet above their eye level. In this case the key light is on the right of the model, but it can be on either side. The key light will be responsible for modeling the planes of the face and forming the shadow of the nose onto the face. We are accustomed to seeing only one key light because the sun is our main light source in everyday life. Two shadows from the nose onto the face rarely occur in nature, so using two key lights looks awkward. If you want your portraits to appear natural, avoid double reflections.

Here is a sampling of the first group of shots. The photographer is shooting at a rate of about two shots a minute, which is a normal pace for this kind of session. (figure 2)

The exposure was adjusted to f/10 @ 1/125sec. using ISO 100. The TritonFlash™ heads were both set at ½ power. The first test shots revealed that the key light was set too low for such a tall model. (figure 3)

How did we know that the light was too low? Note the shadow from her arm falls onto her face and the shadow from her nose points upward, not downward. As a general rule, the only time you want a defined key light at or below the eye level of the subject is for a special effect, such as lighting a villain or increasing the apparent size of a person’s jaw. Most people look best when lit with a key light that’s above eye level.

Here we can see a comparison between a classic Rembrandt pattern and a negative Rembrandt resulting from low light placement and the model tilting her head back. (figure 4)

When in doubt about the height of your key light, look very closely at the eyes of your model to see where the catch light (reflection of the light source) appears. If the catch light is equal to or lower than the pupil of the subject’s eyes, raise the light or have the subject lower their chin. (figure 5)

If the light is already higher than eye level and the problem persists, ask your subject to lower their chin. Many photographic subjects instinctively tilt their head back and they need to be coached to lower their chin. Adjusting the posture of a model is the responsibility of the photographer, since only professional models are familiar with posing techniques.

If your key light is very large, as in the case of a 7 foot OctoDome® used for fashion of full length portraiture, lower placement is acceptable because the light is almost shadowless (See Michael Corsentino’s lesson for examples). Small modifiers like the OctoDome® extra small cast a noticeable shadow and should be placed high. The normal placement for a key light is between 30 and 60 degrees above eyelevel. After inspection of the images, the key light was raised to a proper height as shown. (figure 6)

With the key light raised, the result is improved as seen. (figure 7)

In the next series of shots the photographer raises his camera angle by stepping onto a short ladder. A well-equipped studio always has a step ladder accessible for quick changes of camera angle. (figure 8)

The higher camera angle changes the entire aspect of the resulting photos. With the camera about 18 inches above the models eye level the iris of the model intersects her upper eyelid instead of being centered as in previous photos. The angle also lengthens her forehead and minimizes her jaw. Your subject will appreciate the variation achieved by different camera heights, so try to work it into your routine, even with quick sessions like this. (figure 9)

A higher angle gives the photographer a slightly foreshortened perspective and makes it possible to get a ¾ length shot without having to go to an excessively vertical crop. In this case the photographer adds a tilt to his camera to introduce a diagonal element to the photo. (figure 10)

In our last photo of the 60 minute session the photographer returns the camera to eye level for a head and shoulders composition. In this shot the lighting setup is changed so the key light is now the TritonFlash™ behind a LitePanel with translucent fabric. The broad-source light from the 39 x 72 LitePanel softens the highlights on the model’s face and equalizes and the difference between highlight and shadow. In effect, it removes any identifiable lighting pattern or ratio. This frontal lighting approach is called broad lighting because it seems to broaden the facial planes of the face. It is often used for glamour and facial close ups.

The OctoDome® extra small, which was formerly the key light, has been moved behind the model to create a glow in her hair. Diagram fig. 11

Result from the new lighting setup appears below. (figure 12)

Our thanks go out to Vanessa for modeling in this lesson. The quick lighting and shooting of this 60 minute session is challenging for the photographer, to be sure, but additional stress falls upon the model. It’s very difficult to do a couple of clothing changes and multiple poses in so short of a time.

Vanessa’s total on-camera time was only 19 minutes. High school portrait settings last longer than that. Thank you Vanessa for doing a great job!

We hope this lesson will help you to improve your studio shooting skills. The Photoflex® Team thanks you for your interest in our products!