For Photographers, Microsoft’s Surface Pro 2 and Apple iPad Air May Be Horses of Different Colors 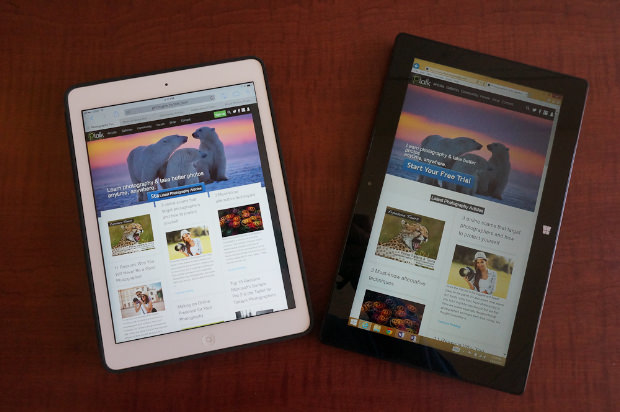 Apple certainly deserves to be considered the tablet master, as it essentially invented the device and defined the market…initially. During the short period of time since the first iPad, Apple has tweaked, refined and strengthened the concept, a strategy that has proven successful. Of course, being first makes you a target, as your competitors can study what you’ve done and determine how to best your efforts.

With the introduction of Microsoft’s Surface concept, and now the Surface Pro 2 iteration, the company appears to be following a strategy that allows it to gallop in step with the new iPad Air, without actually running a race. As a photographer, you can ride either of them to your destination; you just may find the Surface Pro 2 feels better in the saddle.

If your photography work requires a full-fledged computer in the field with you and you don’t want to add the size and weight of a typical laptop to your gear, then Surface Pro 2 is the obvious choice. Microsoft’s improvement on the tablet concept is to give you a complete Windows system in the smallest footprint possible. It runs Windows 8.1, the complete Office suite and, most important, is entirely compatible with Photoshop and Lightroom. Whatever functions you can perform on a Windows desktop or laptop device, you can duplicate on Surface Pro 2.

By comparison, there is no Office suite for the iPad Air and it can’t accommodate Photoshop or Lightroom. Granted, its iOS 7 system is preferred by many users, including photographers; but one obtains little value from an excellent operating system in a tablet that doesn’t run the apps you need to review and edit your images. You can use Apple’s equivalent of Office, iWork, but if you are already familiar with Office (which is safe to assume you and most other photographers are), then why learn an entirely new set of programs?

The word “Productivity” may describe the major differences of Surface Pro 2 and iPad Air, with the edge going to Microsoft. The tablet concept, as rendered by Apple, is meant to be a lightweight device for handheld portability, which is certainly attractive to a photographer. At just 1 lb. and dimensions of 9.4 x 6.6 x 0.29 inches, the iPad Air achieves its goal. Conversely, Microsoft’s take on the concept is to provide as much portability as possible, but give Surface Pro 2 the size and capacity, again, to bring a complete computer with complete productivity to any location where you might be shooting.

Yes, the Surface Pro 2 is a pound heavier than the iPad Air, but also slightly larger, at 10.81 x 6.81 x 0.53 inches. As marvelous as computer technology is, there are still compromises; however, it isn’t actually a compromise if you want a total computer with you. It would be fairer to compare the Surface Pro 2 to a typical laptop. They may both run the same OS and apps, but the Surface Pro 2 is smaller, lighter and can be used as a tablet.

The Surface Pro 2 also gains on the productivity track with its two kickstand angles. You couldn’t use it like a desktop or laptop computer unless it had the versatility of the common 24-degree angle for optimum desktop typing. Microsoft then added the 40-degree angle, which makes it easy and comfortable to use the Surface Pro 2 in your lap. If your passion is landscape, wildlife or street photography, then you don’t need to find some haphazard surface on which to type and work; you can use your lap.

Both the Surface Pro 2 and iPad Air require an optional keyboard to be fully functional as a computer-like device. Your only choice for the iPad Air is the Apple Bluetooth keyboard, which is certainly a worthy addition. The Surface Pro 2, however, has two keyboard options. The Touch Cover 2 operates like any touchscreen device while the Type Cover 2 has physical keys like a traditional keyboard. You can pick the option that feels most comfortable and familiar to you, plus both only weigh 6.4 ounces.

Microsoft has also designed a docking station for the Surface Pro 2, which adds to its versatility for a photographer. Take the basic device into the field with you during a long day of shooting, and then connect it to the docking station in your hotel room to utilize the full power of a desktop system.

The Surface Pro 2 is also a fully functioning “productivity” device because it includes an excellent array of connectivity options that are not standard on the iPad Air. These include a USB 3.0 port, headphone/microphone combo jack, Mini DisplayPort and microSFXC card slot. With the USB port and Lightroom, you can easily tether your digital camera to the Surface Pro 2 to be a highly effective preview screen or to download images quickly. Wireless-image transfers are possible with the iPad Air, but a 7MB file can take as much as 45 seconds. Shoot hundreds of images in the field and you’ll be waiting hours.

There’s no denying that Apple has pushed display resolution to a new high with its Retina screen’s 2048 x 1536 pixels. The Surface Pro 2 has the more “common” 1920 x 1080 resolution. The question one must ask is whether the Retina resolution is actually necessary for a photographer in the field or on-location. It’s unlikely you would use either device to finalize your images; presumably that takes place at home or in your studio on your desktop or laptop. According to various independent reviews, the Surface Pro 2’s resolution is gorgeous, delivering excellent sharpness and color rendition, which is all you should actually need in the field to review images and decide to shoot additional images of your subject matter.

PhotographyTalk has already heard from a number of photographers who find the much improved screen stylus with the Surface Pro 2 to be absolutely critical to using Photoshop or Lightroom efficiently. The stylus is particularly compatible with Lightroom’s spot removal amd adjustment brush tools.

Apple touts the iPad Air’s battery life of 10 hours, depending on use; but, again, is that another “advantage” that isn’t very meaningful when the device can’t operate as a complete computer as the Surface Pro 2 can? No doubt, Microsoft had to improve the original Surface Pro’s 4-hour battery life; and it did with 8 hours of continuous Web surfing, as one use example. To have full computing capabilities in the field, it’s worthwhile to purchase the optional Power Cover for the Surface Pro 2, which is also a 35-watt-hour battery pack, adding 2.5 times more battery life.

It appears the Surface Pro 2 has a decided configuration advantage over the iPad Air. It comes in four options: 16GB, 32GB, 64GB and 128GB…and somewhat surprising only has 1GB of RAM. These specs don’t seem to serve the purposes of a photographer very well, although 128GB capacity may be sufficient in the field.

By comparison, the “smallest” Surface Pro 2 comes with 64GB SDD and 4GB of RAM. The other three configuration options seem to have been developed with photographers in mind: 128GB SSD / 4GB RAM, 256GB SSD / 8GB RAM and 512GB SSD / 8GB RAM. 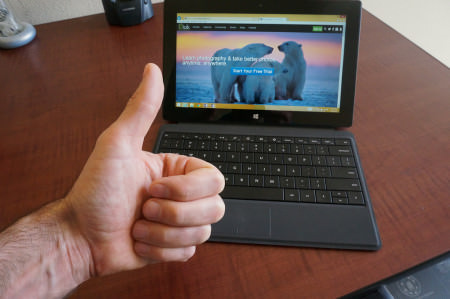