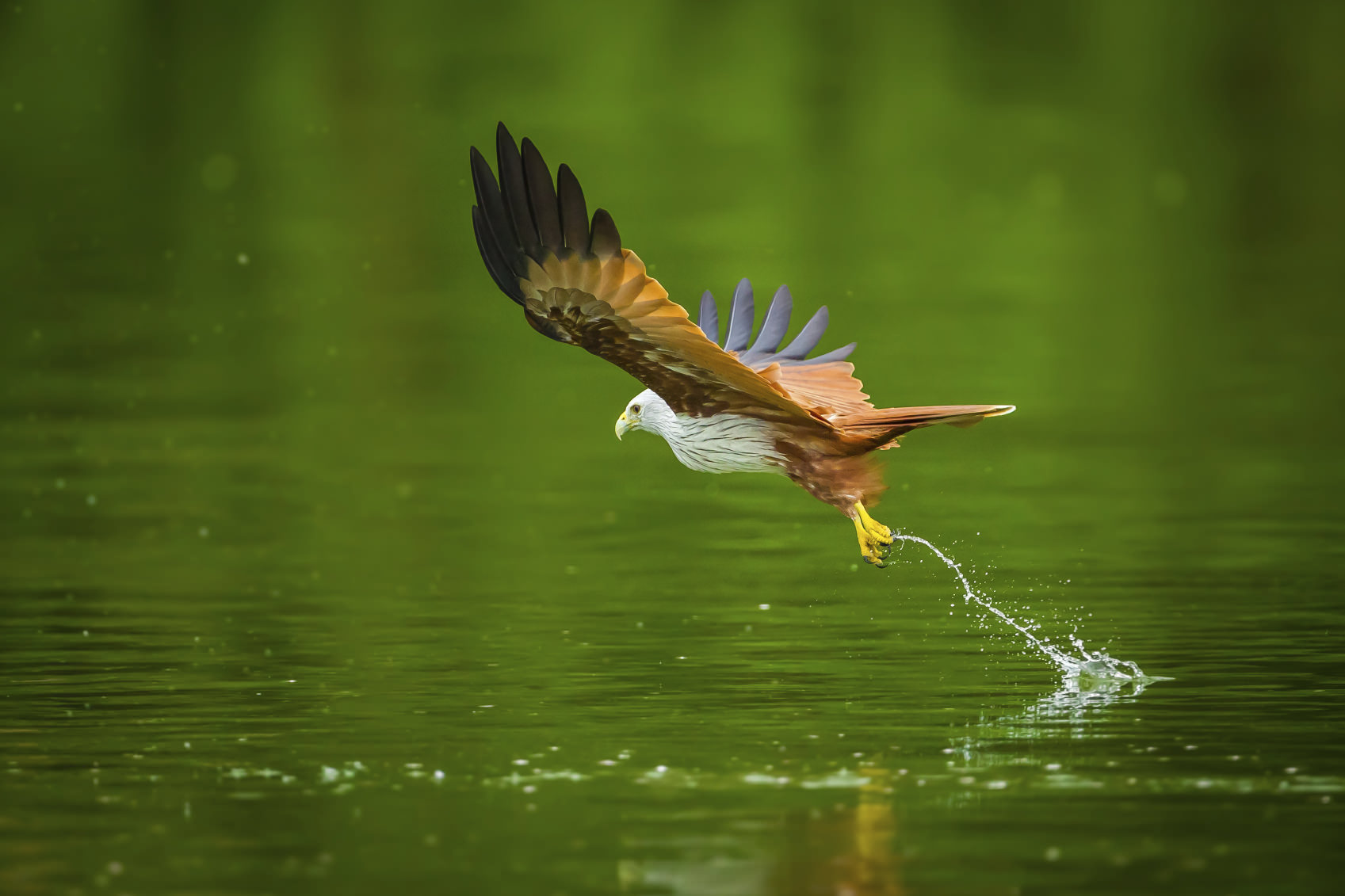 Most wildlife photographers, amateur and pro alike, contend that one of the most difficult shots is a photo of a bird on the wing. While anything in motion is challenging, the aerobatic maneuvers of birds are hard to predict and follow and the speed at which the birds themselves and their wings move will test your skills like few other subjects. This lesson will focus on achieving the best results when shooting birds in flight.

There are two important factors in successfully capturing an object in motion: avoiding motion blur and maintaining focus. The first of these two, in relation to the object itself, is a matter of keeping the camera moving at the same rate as the object while keeping it in the frame. As you probably already know, the technique you'll need to master for that is panning. Exposure settings, of course, will also have some bearing on your results.

Maintaining focus while panning is much easier with the assistance of your camera's AF system. It is, nevertheless, a skill that you need to develop, since it's important how you use the auto-focus. Without proper control, the AF system may actually ruin your motion shots.

For stationary birds, a shutter speed of 1/60s or faster is generally enough to freeze motion. When dealing with birds in flight, the speed needs to increase considerably to maintain sharpness and drastically if your desire is to freeze as much motion as possible. (Remember that some motion blur in the wings can add to the dynamics of the shot.) 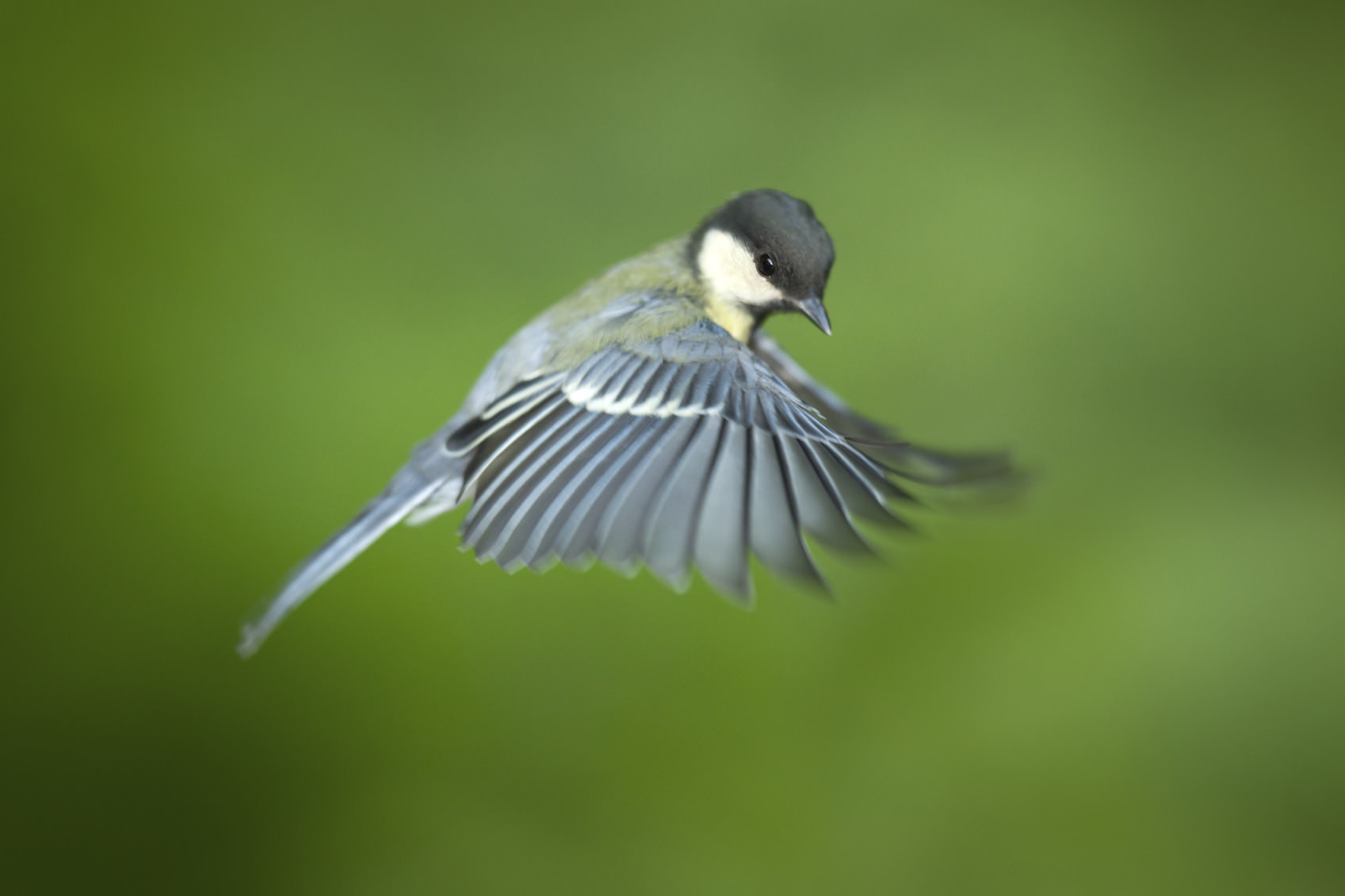 The speed of a bird's movements will also influence the best effective shutter speed. Generally speaking, smaller birds beat their wings at a higher rate of speed and their movements . There are obvious exceptions, but as a rule of thumb, the smaller the bird, the higher the shutter speed required to freeze motion.

The shutter speed you actually choose will depend on the effect you're trying to achieve, but you can expect to use speeds in the range of 1/500s to 1/1000s for larger birds such as cranes or herons, and higher speeds for smaller birds. Bear in mind that your proximity to the bird and many other factors will affect the outcome. Practice will be your best guide.

As always, the aperture size is a component of the overall exposure and will affect the depth of field in your image. In cases where you're concentrating on one bird in flight, shallow depth of field will be suitable. That means that you can shoot at a wide aperture setting, which in turn allows higher shutter speeds. Remember that at shorter focal lengths, effective depth of field will decrease. It's also important to keep in mind that some lenses exhibit aberrations at their widest aperture settings, so stopping down by one stop, or more if possible, is often a good practice to maximize sharpness.

The same rules apply to your ISO setting in bird-in-flight photos as any other. Use the highest setting at which digital noise is manageable. That setting will depend on the camera, the lens and the capabilities of your editing software. Noise is one of your worst enemies in maintaining sharpness, so lower ISO settings are best when they allow shutter speeds to remain high.

We'll address some special exposure considerations in Part 2 of this lesson. 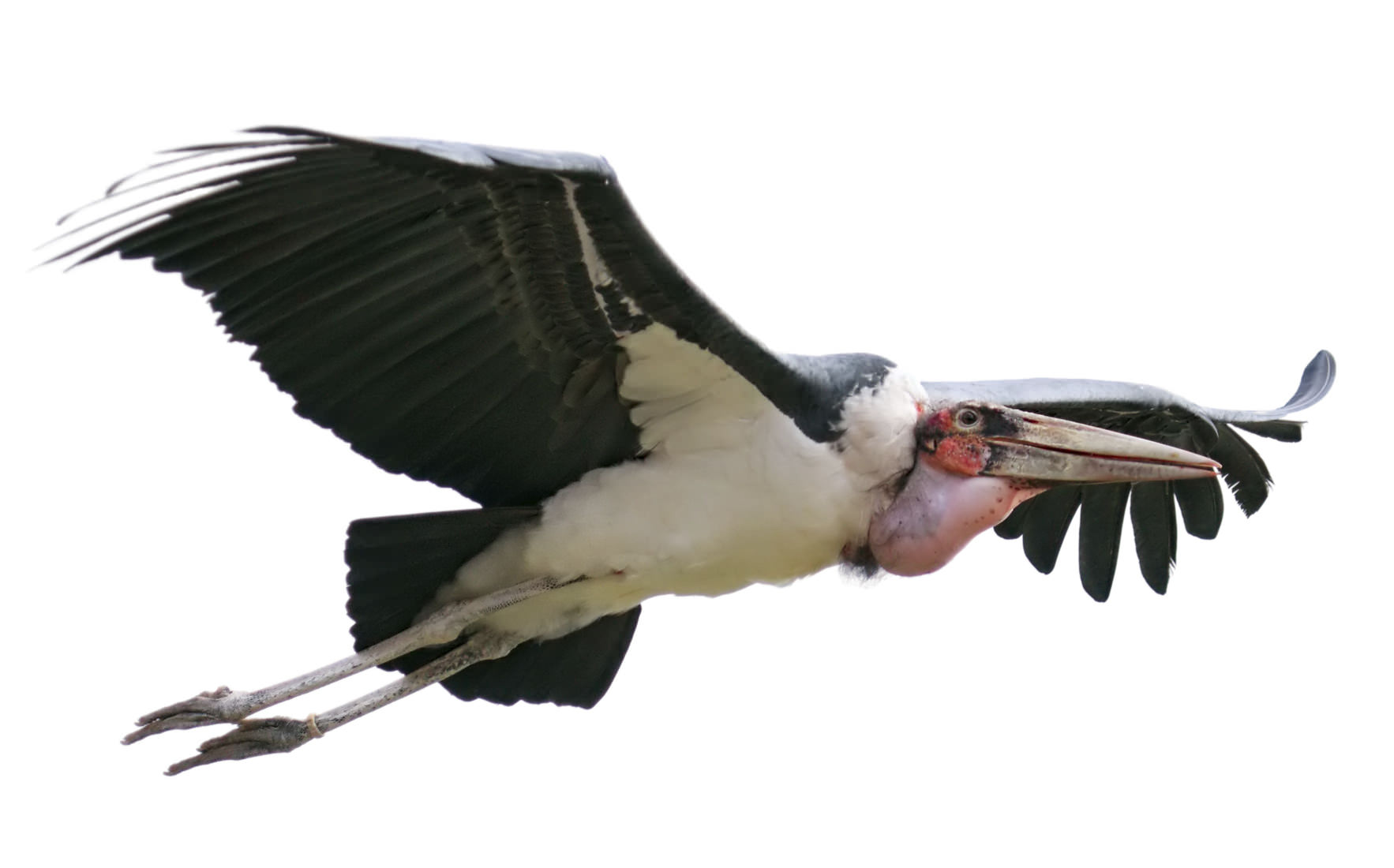 Now that we've covered the exposure basics, we'll move on to taking the shot, starting with how to develop good panning technique. Naturally, the point is to move as smoothly as possible, while maintaining the right rate of speed to keep the bird positioned properly in the frame. To do that, you need to establish a solid base for the camera and limit the movement to the proper axes.

If you're hand-holding your camera, the key to a solid base is to place your feet (or knees if you're on them) a comfortable distance apart, keep your elbows in and support the camera with your right hand and the lens with your left hand underneath it. Think of a triangle of support with the center of gravity of your rig at the top.

Try to concentrate on moving only at the waist and above and stay within that triangle as you follow the bird on its flight path. If you need to move up or down, doing so with the angle of the camera will be more stable than leaning or ducking.

If you're shooting with a long, heavy lens, panning by hand will be exhausting and much harder to control. A tripod may be somewhat restrictive, but with a good pan and tilt head or, better yet, a gimbal head and some practice, you'll find you should be able to follow your subjects.

Follow through! No matter which method you use, one of the most critical mistakes made when panning is failing to continue the motion during and through the shutter operation. Whether you're shooting in single or continuous mode, keep panning until after the final shutter movement completes. This single step is often all that's needed for many novices to overcome their problems with panning shots. 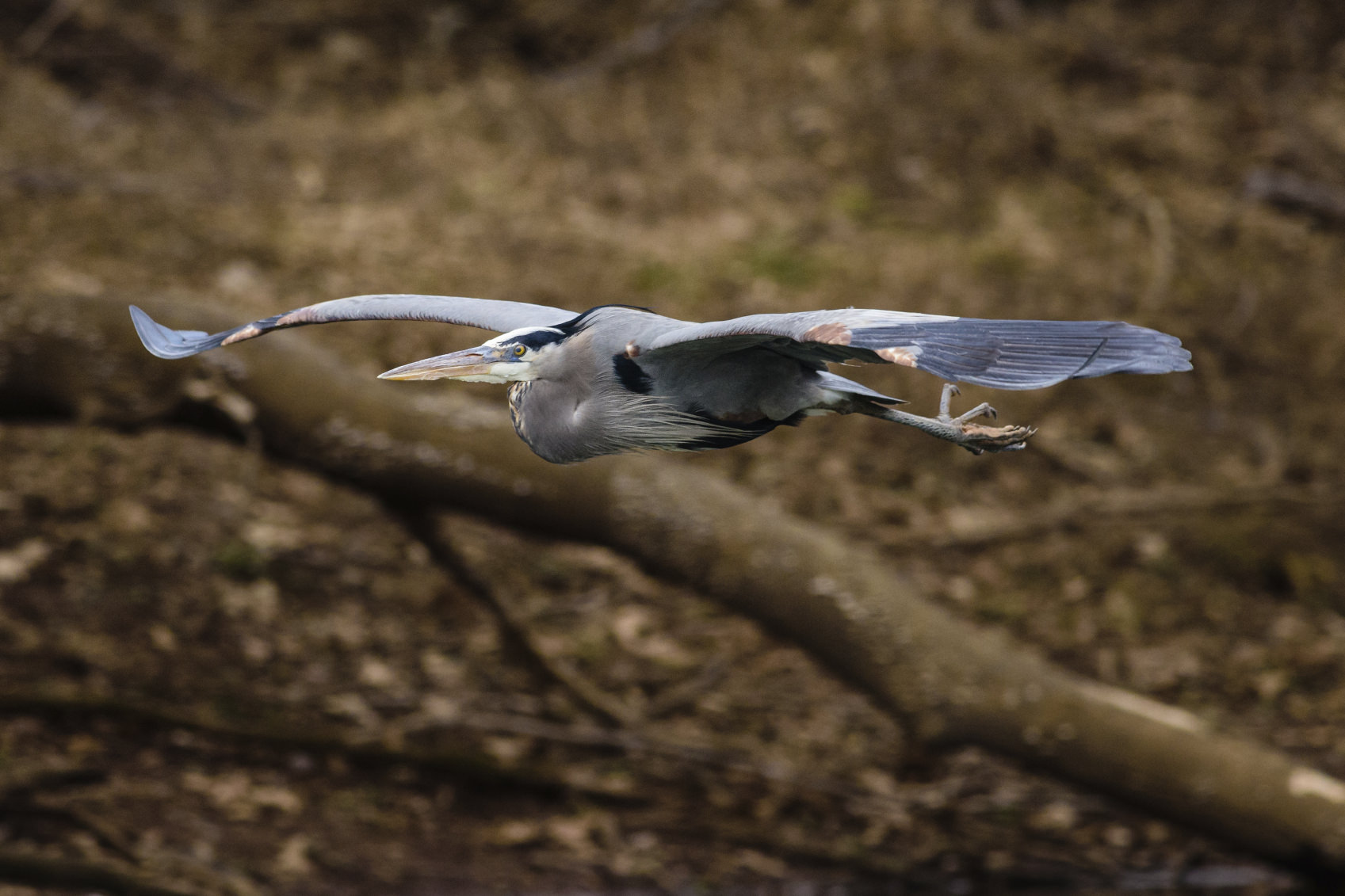 As mentioned above, focusing while panning is easier with the aid of your camera's AF system, as long as you realize it's capabilities and limitations. AF has become quite sophisticated in modern cameras, but successfully using them for panning shots is dependent on the right settings and methods.

One of the first choices you'll need to make is the AF mode to use. For most panning situations, the tracking or “servo” mode will be the preferred choice, since it automatically adjusts the focus as the bird moves closer or farther away. This lets you concentrate more on tracking the bird and anticipating the perfect moments for the shots.

Keep in mind that its important to select a good initial target for the focus point and to maintain that target well within the frame. Because of the distances you'll often be shooting at, the bird's head is often a better choice than the eye. Using the body of the bird is rarely a good choice, since the focus may shift to the wings as they move.

Another important is which focus point or points to enable. Most experienced bird photographers prefer to use a single focus sensor or small group of sensors, to avoid letting the system drift off the main focal point. The center point is often the selected point, since it's invariably one of the strongest. This limits your framing options somewhat, unless you shoot wide and crop later. Depending on the situation and the focus sensors of your camera, choosing an off-center point can help improve the in-camera composition of your photos.

Because a bird's movements can be erratic and their details can be a difficult subject for an AF system, there may be situations that call for unusual focusing techniques. For instance, in tracking a bird close to water, the water just ahead of the bird may be an easier subject for the camera's system. 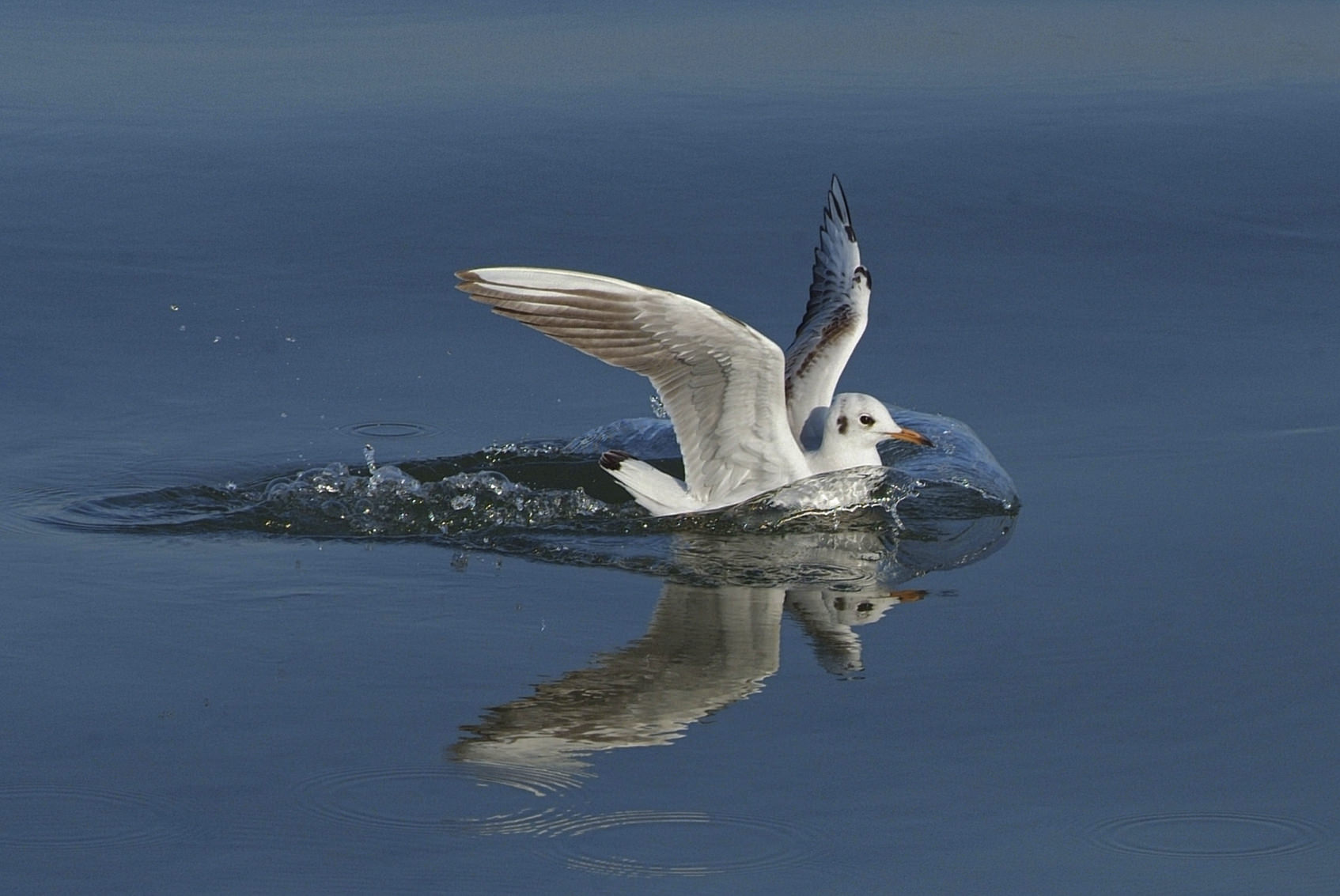 Custom settings for your particular model of camera or lens may provide some valuable help in maintaining your focus while panning. Some cameras will allow you to lower the AF sensitivity, which can help avoid shifts to a different part of the image when things are moving. Some lenses are equipped with a focus limiting switch, which may help increase focusing speed be decreasing the range the lens uses when re-establishing focus.

Finally, as always, every shooting situation is different and no “rule” for using your AF system can be considered hard and fast. Nothing will improve your results more than practice. The bottom line is getting to know the AF capabilities of your camera and lenses.

That's it – for now! There's much more to cover in learning to photograph birds in flight, however if you're like me, learning is easier when it comes in fairly small doses. We'll cover more of this important aspect of bird photography in Part 2.