These Inspiring Photos Will Have You Running For Your Camera! 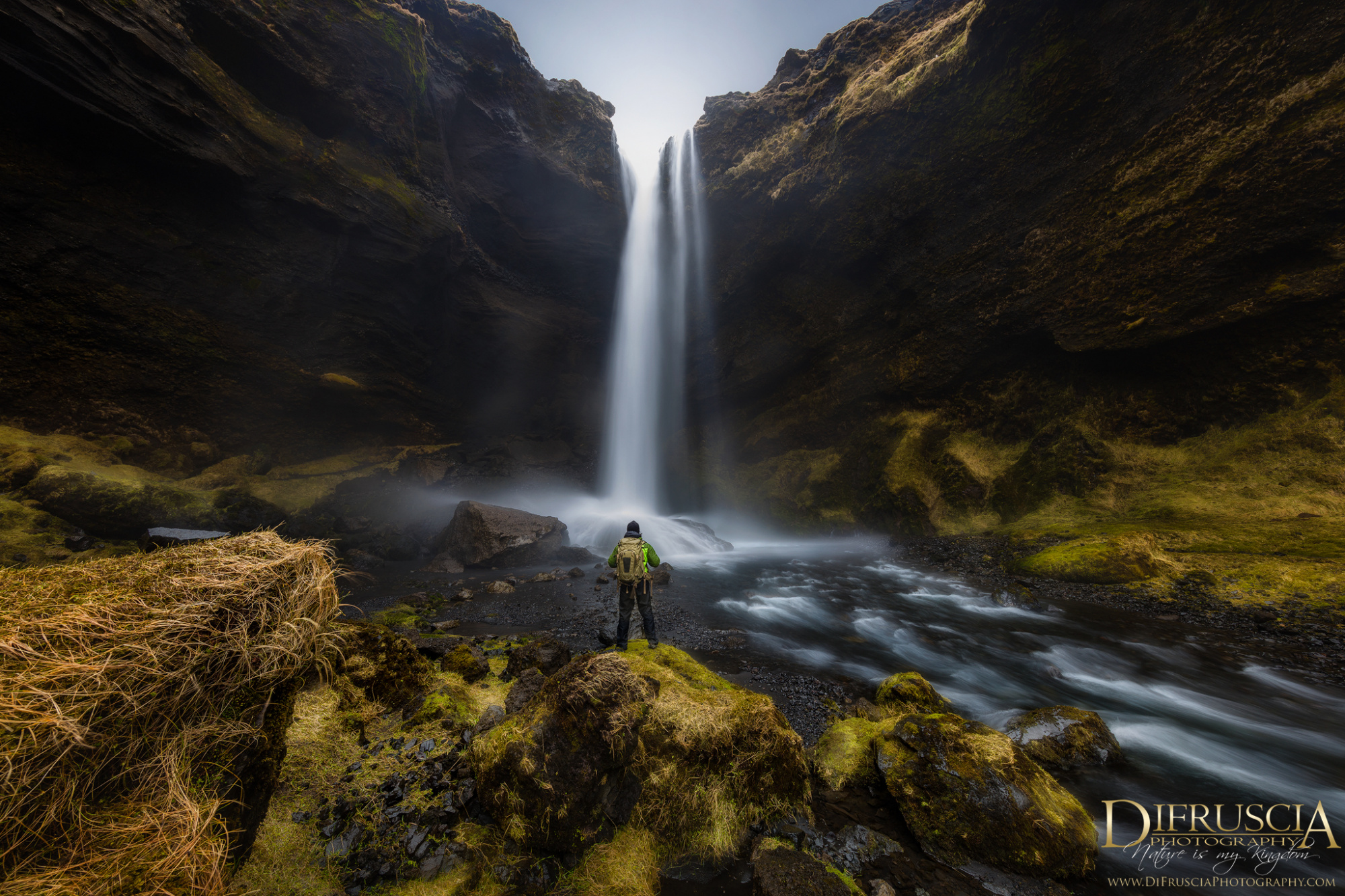 The image above is something else, right?

I love everything about it - the lovely blurry water, the foreground texture of the rocks and moss, the inclusion of the person in the shot, the wide-angle view...

I could go on and on.

It makes me want to grab my gear and hop on a plane to some far-off location and spend some quality time out in the wilds.

In fact, I’ve come across a ton of images lately that inspire me to do such things.

I think you’ll find that they are pretty magnificent yourself! 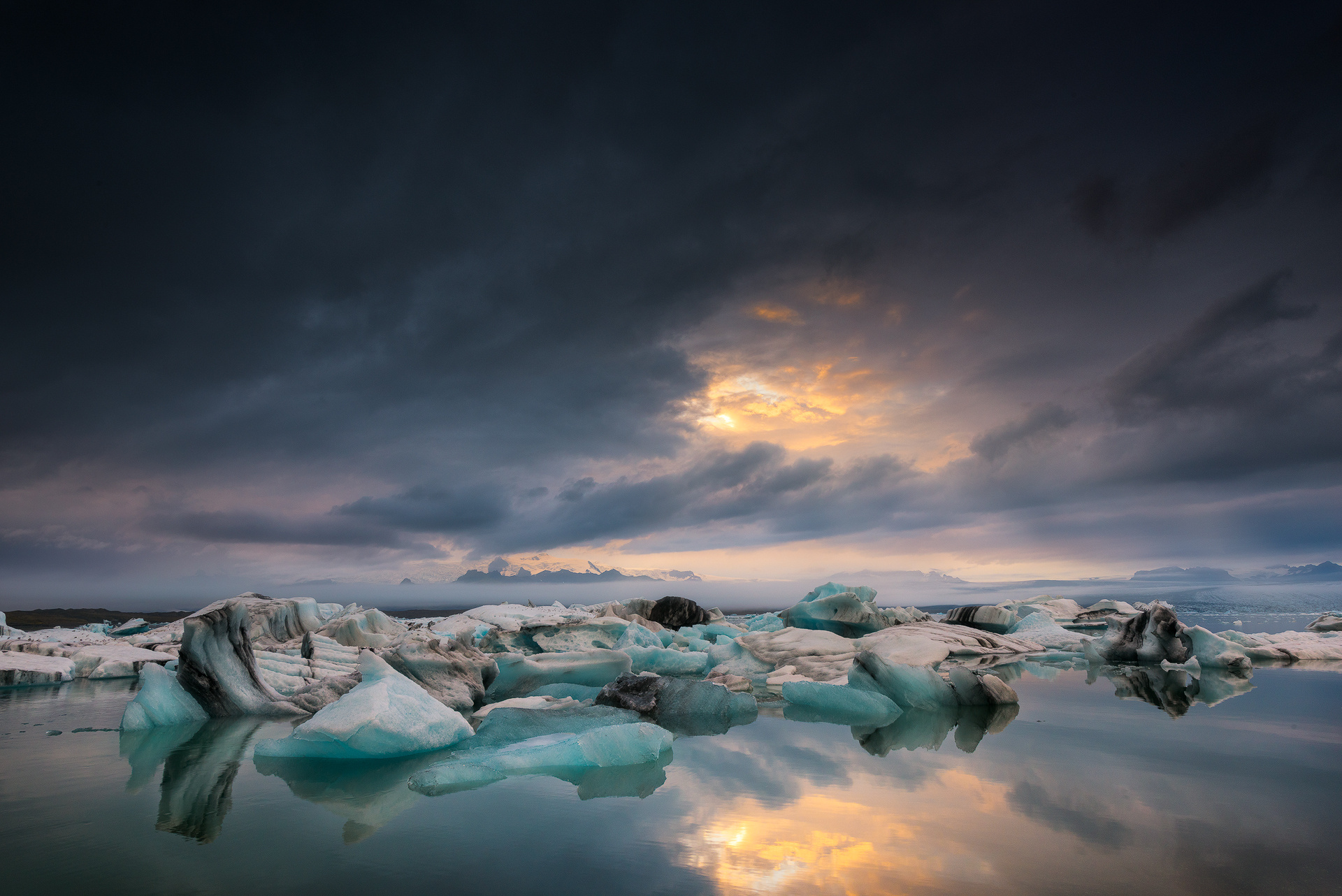 This photo has tons of mood, doesn’t it? On the one hand, it’s on the dark side, which gives it a sense of emotionality while on the other hand, the bright elements of the sunset colors and the pops of bright blue in the icebergs make it almost an ethereal experience. It’s titled “Prelude to a Dream,” and I think that’s quite an apt name! 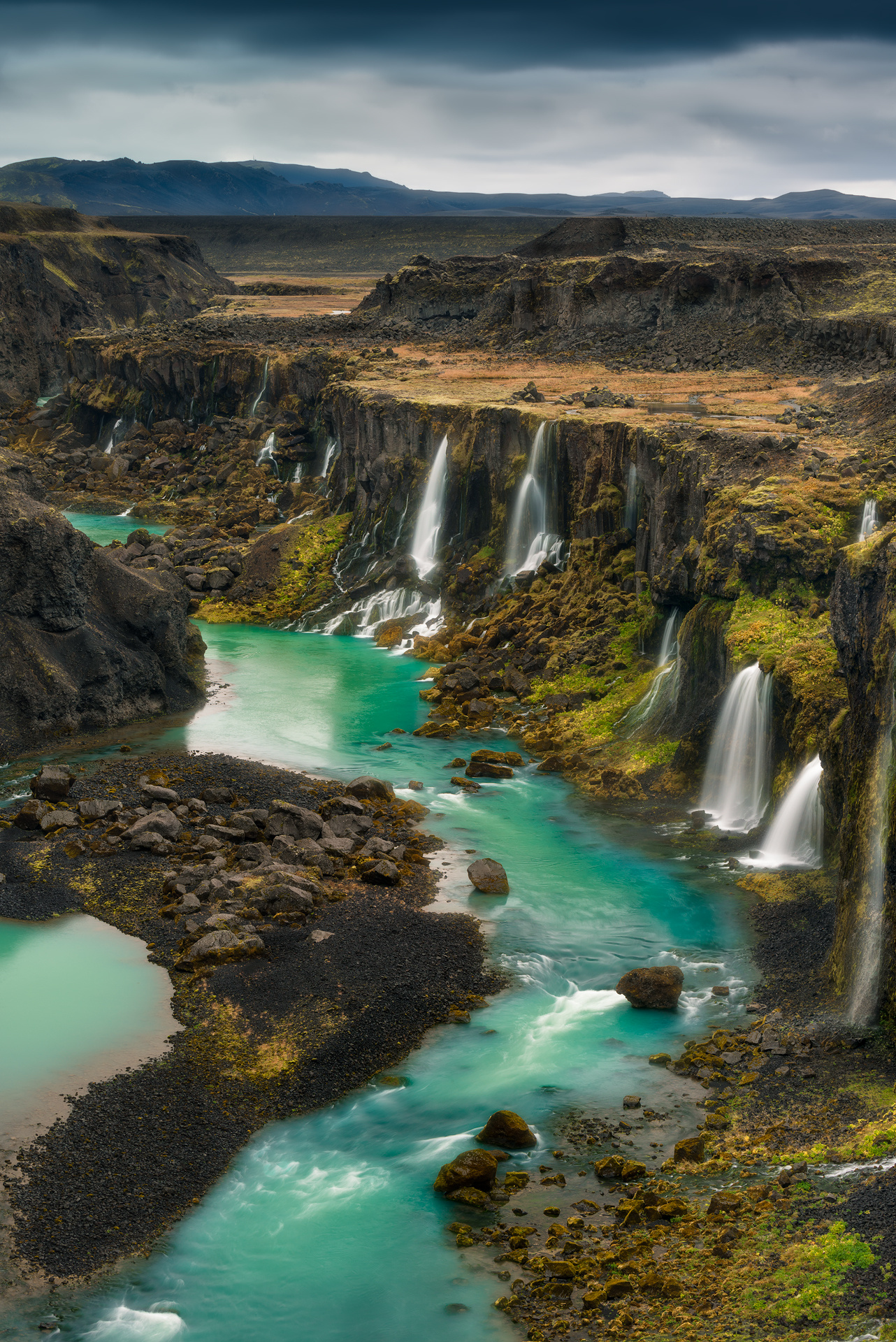 What’s better than a waterfall? A bunch of waterfalls! With a shutter speed of just 1 second, a glorious blur was achieved to give this image a nice, dreamy look. Note how the vertical aspect enhances the height of the waterfalls while also giving us a prime view of that green-blue river running from top to bottom in the frame. Who says landscape photos have to be taken in landscape format?! 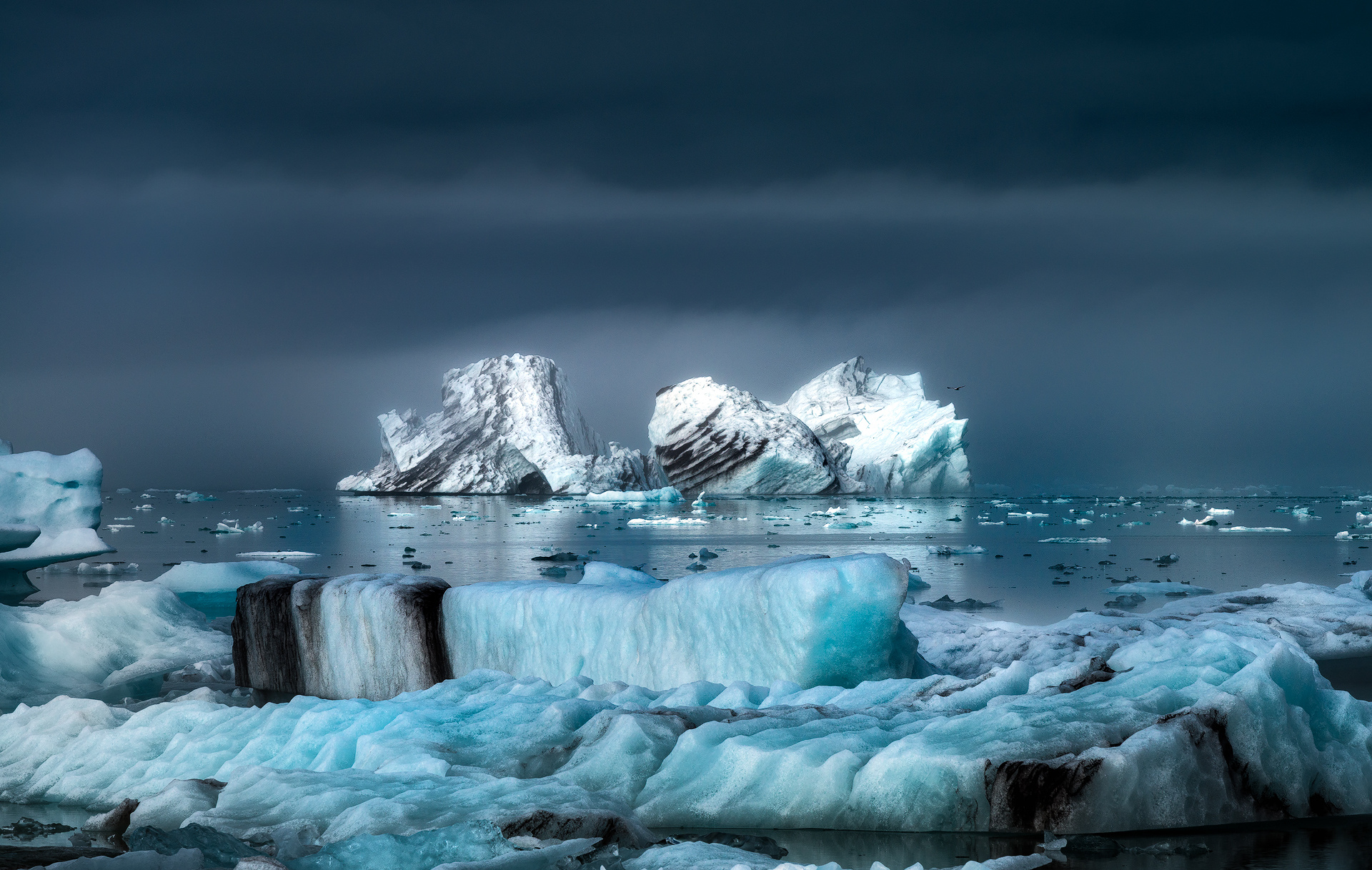 Aside from the incredible detail in this shot from the foreground icebergs and the behemoth chunk of ice in the middle of the frame, this photo inspires me to get outside and take some photos because of the focal length used - 200mm. It just goes to show the value of switching things up and using a lens that might not traditionally be used for this type of photography. I also like the detail of the bird flying in the midground - do you see it? 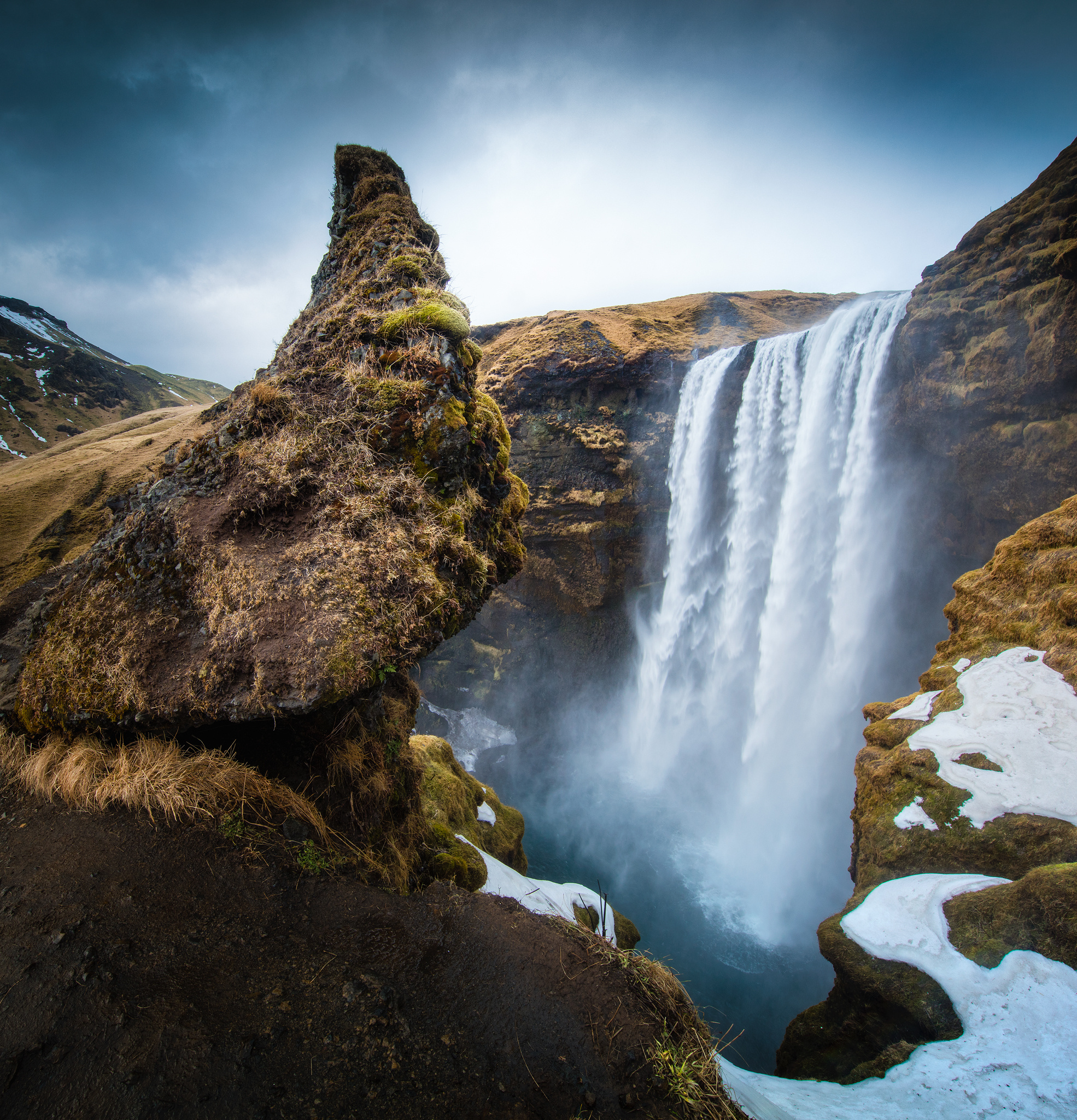 I’d say most waterfall photos place the visual emphasis on the waterfall itself. But in this example, we see the value of adding surrounding areas of interest to enhance the primary subject. The foreground rock formation has a unique, jagged shape that contrasts nicely with the falling water. Additionally, the positioning of the rock in the foreground of the image gives it more depth and provides a better sense of scale regarding the height of the waterfall. 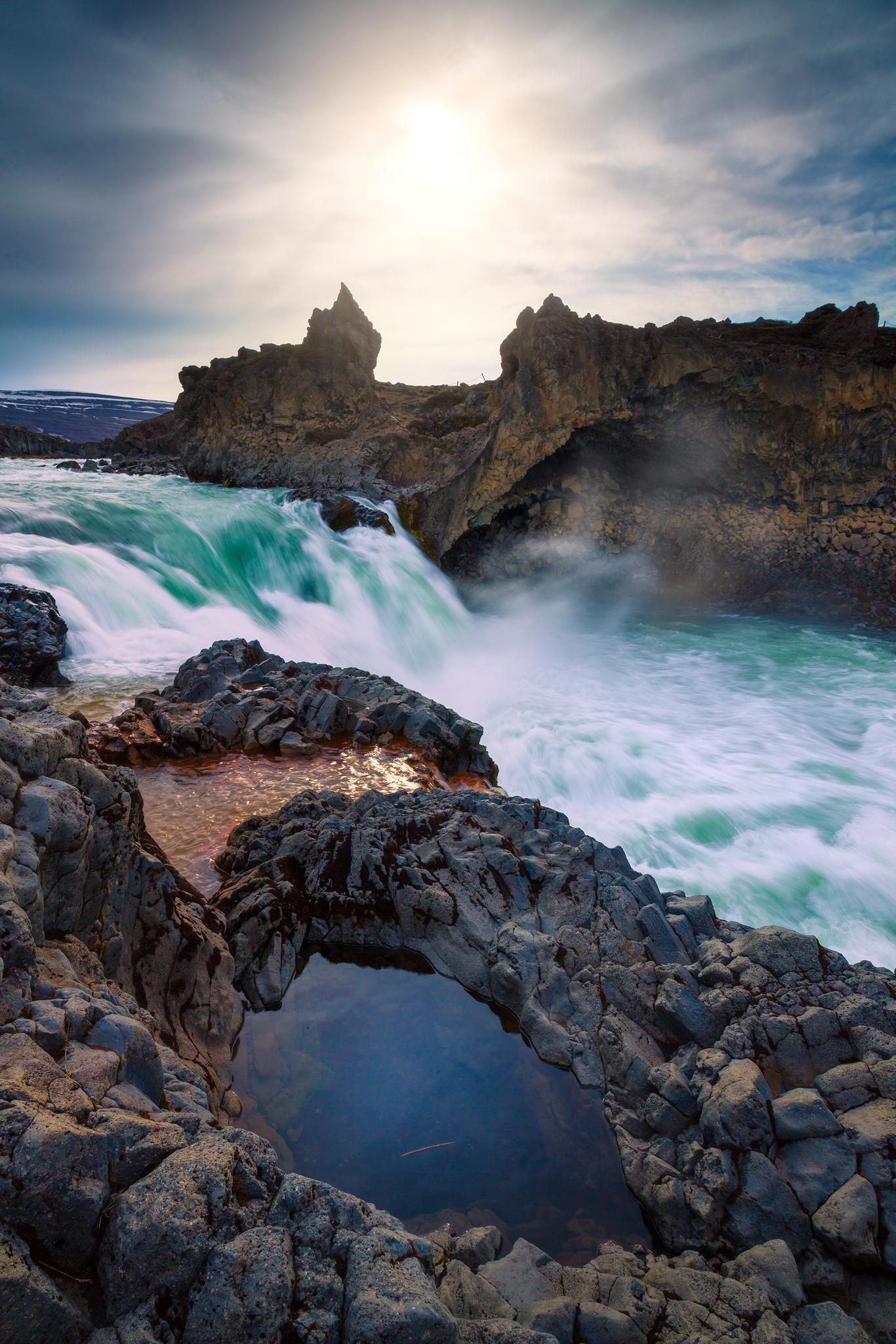 Who says you can’t shoot towards the sun? As long as you have the appropriate filter, including the sun in your landscape photos can have beautiful results, as seen here. The sun adds dynamic range to the shot with its brightness contrasting nicely against the dark tones of the rocks in the foreground. Speaking of those rocks, their texture adds nice detail in the foreground and pairs nicely with the smooth, blurred out water in the midground. 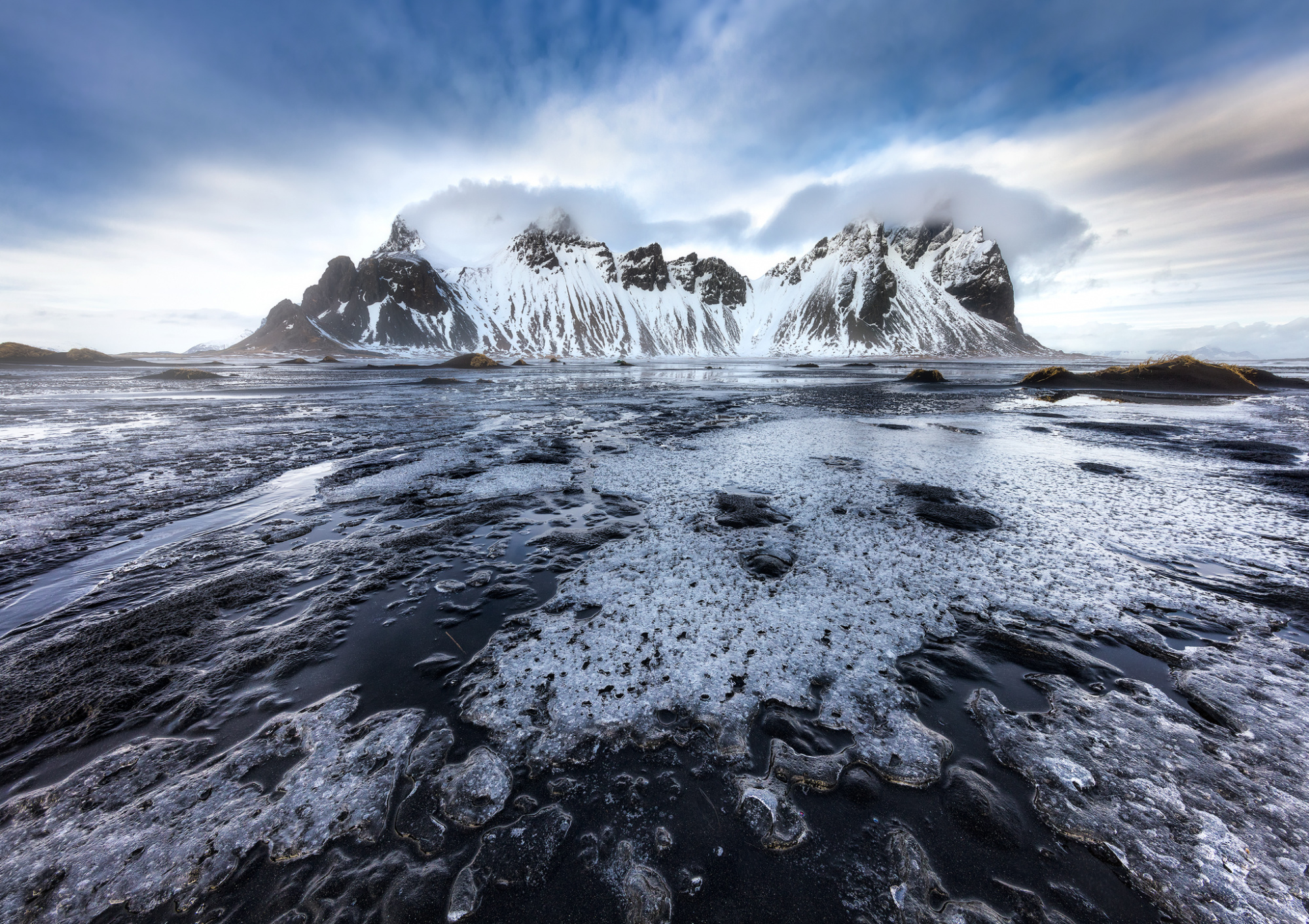 When composing a landscape shot, you have to take into account where to place the horizon line. If there is a lot of visual interest in the foreground, as is the case in this image, it behooves you to shift the horizon line upward. In this case, that gives us a better view of the interesting formations in the ice, while also excluding the sky, which, although it has some interesting details, doesn’t add as much to the composition as the ice in the foreground. 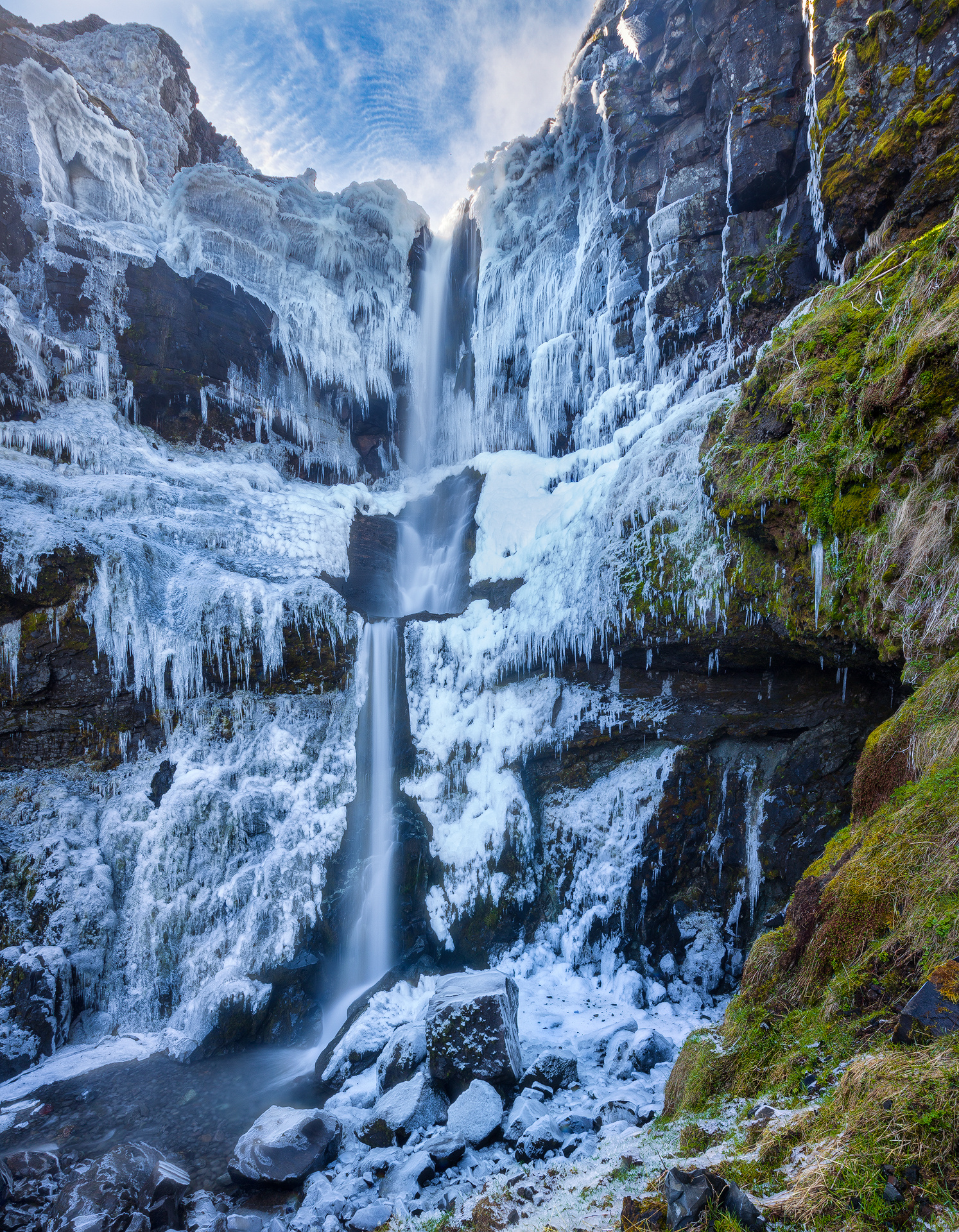 The difficulty in photographing an exceptionally tall subject is fitting it all into the frame while providing some surrounding detail that gives context to the shot. In this case, the distance from the waterfall and the 50mm focal length were a perfect combination to get the entirety of the waterfall into the shot, as well as the pool at the bottom and a bit of sky at the top. The result is an image that’s perfectly framed with high visual impact. 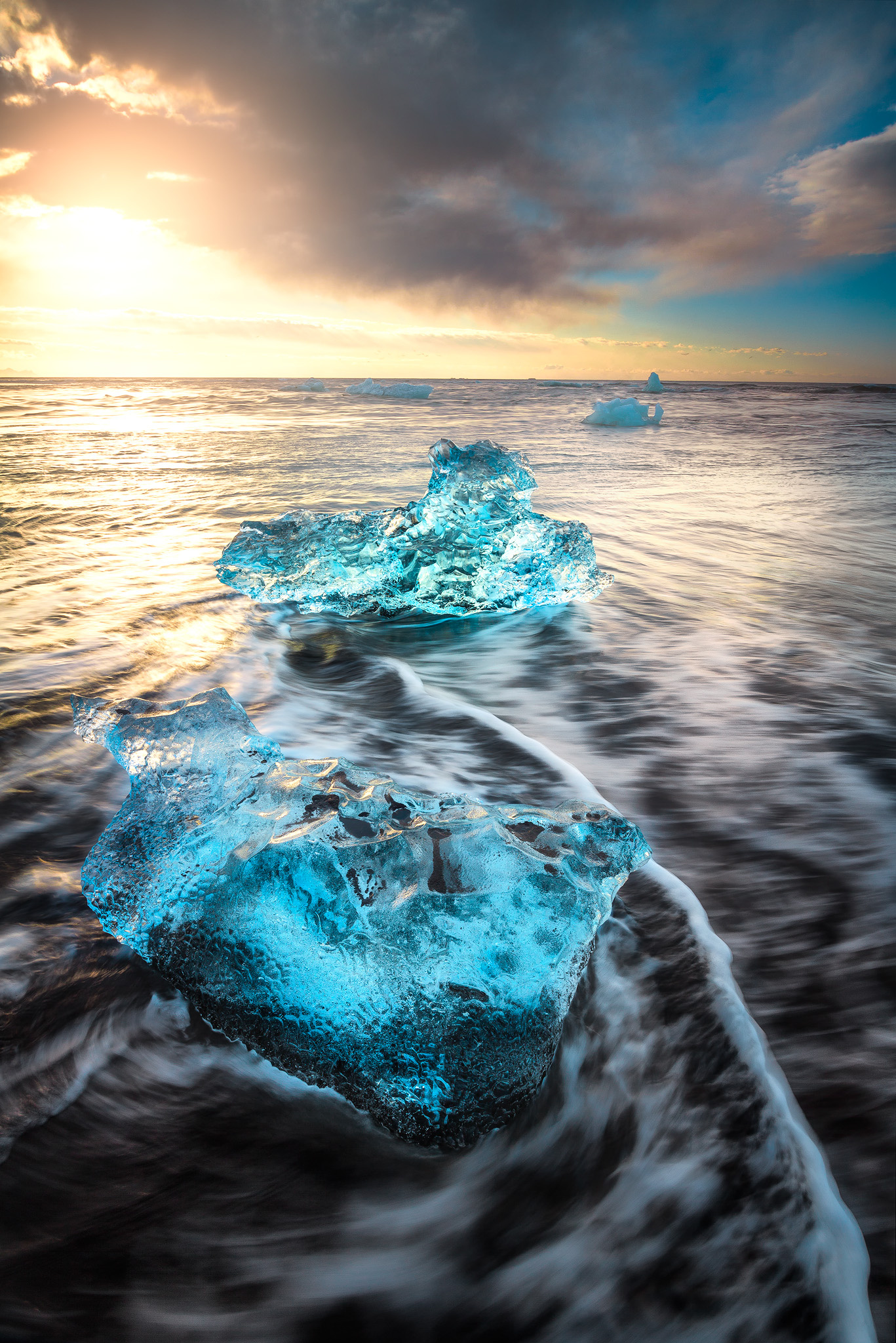 Color is one of the most impactful elements you can incorporate into a landscape photo. And, as seen here, the almost neon blue of the icebergs give this photo tons of pop that make it look like it was taken in another world. The burst of orange tones from the setting sun adds nice contrast to the cool tones of the blues while the long exposure setting gives the motion of the waves a gorgeous, blurred look. 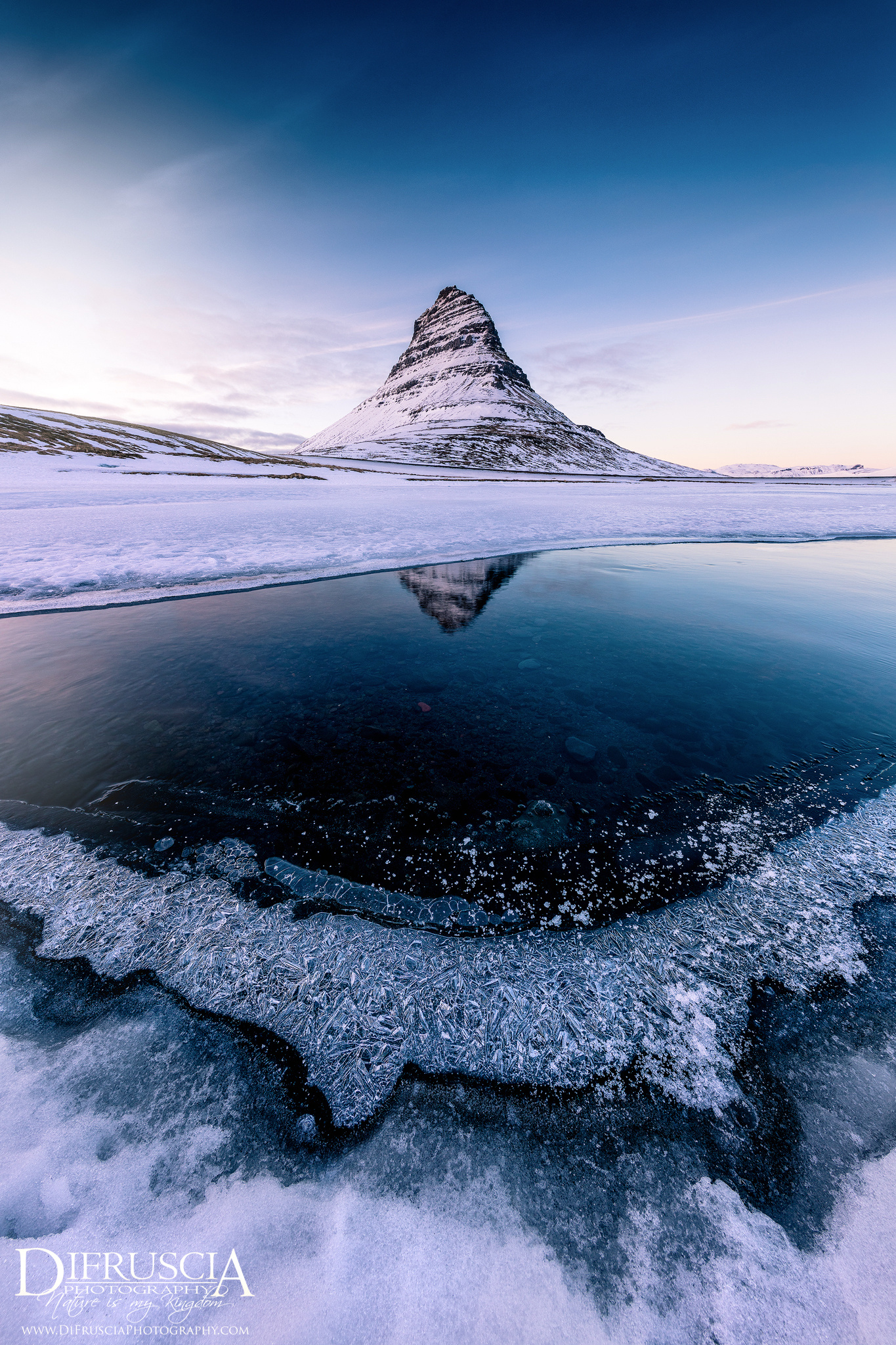 Wintery landscapes can be difficult to master for a variety of reasons, not the least of which is the abundance of white in the scene. However, you can balance out the white tones of the snow by incorporating landscape elements like the mountain and the lake seen above. The reflection of the water breaks up the otherwise snowy landscape and the sky has just a touch of warmth along the horizon that help make the shot more visually appealing. 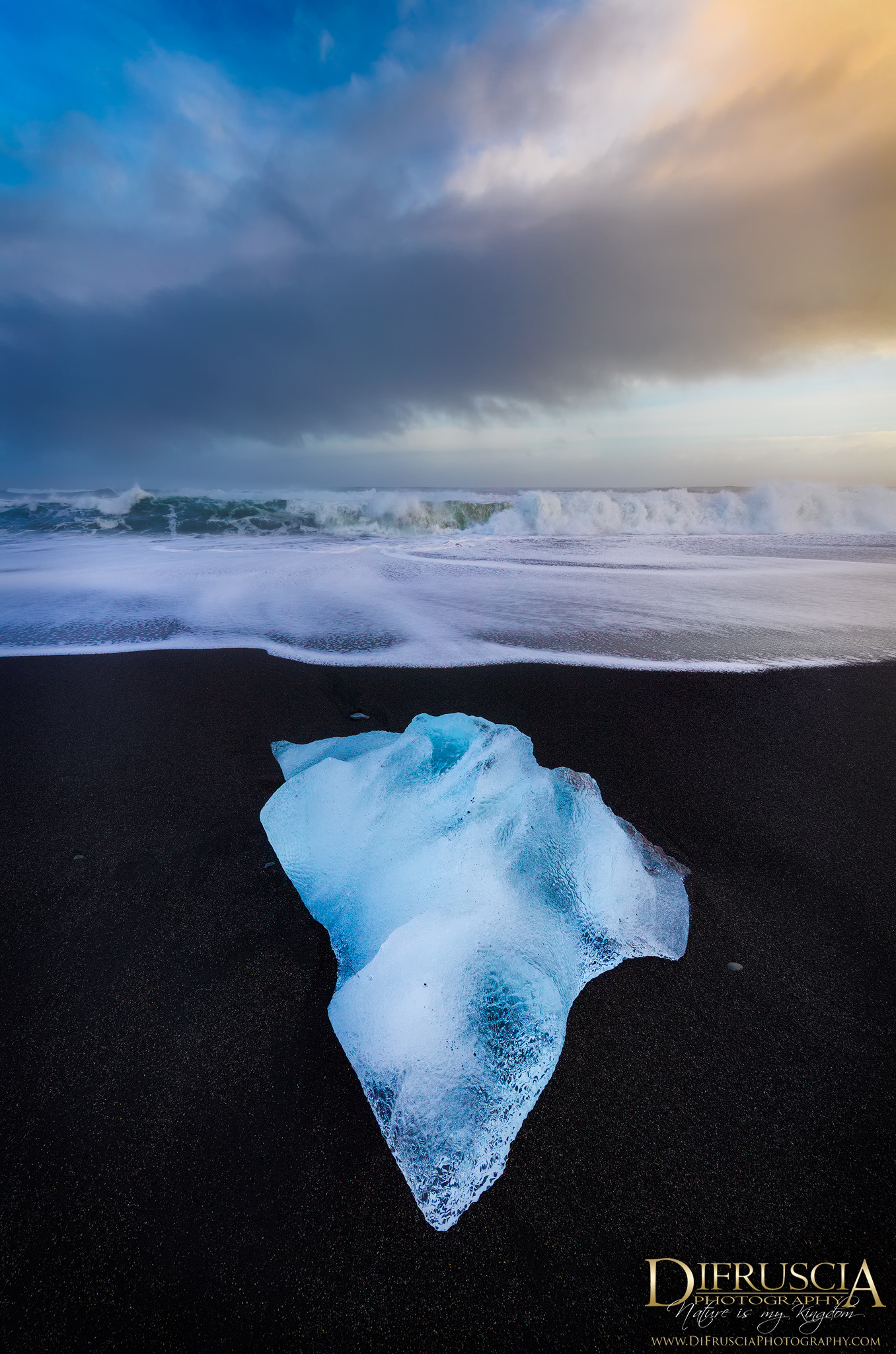 The black sand beaches of Iceland are one thing I definitely need to photograph in my lifetime, and the photo above shows you why. Cast against the deep, dark sand, the chunk of ice on the shore takes on an even more interesting look with colors and textures that immediately catch your eye. It’s a peaceful scene that juxtaposes beautifully with the impending wave crashing toward the beach in the midground of the shot.

I know that when the day comes, I’ll travel to Iceland with Discovery Photo Tours, and I’d like to recommend that you do the same.

In addition to visiting some of the most iconic locations in Iceland, you’ll have a chance to photograph the Northern Lights - a subject worthy on its own, but set against the backdrop of Iceland, I can’t even imagine how beautiful it will be!

Additionally, the tour is scheduled to be guided by two photography heavyweights - Ken Kaminesky and Patrick Di Fruscia - who will share some of their wisdom while helping tour participants develop more finely crafted photography skills.

Gorgeous landscapes. The Northern Lights. Guidance from photography experts. What’s not to like?

Visit Discovery Photo Tours for more details about this and other upcoming photography tour dates.