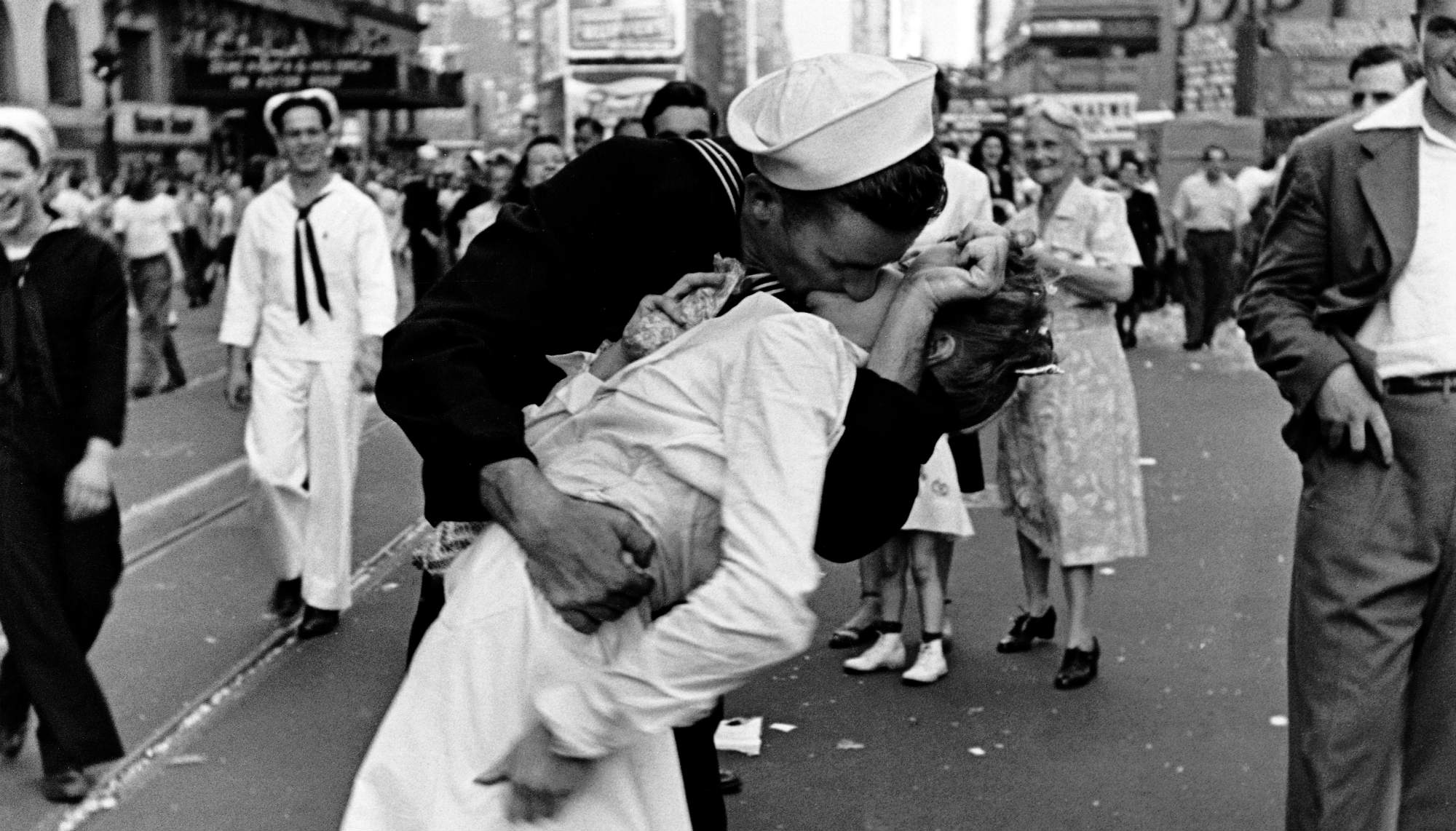 Photo by Alfred Eisenstaedt. Used here as Fair Use under Section 107 of the U.S. Copyright Act.

Eight days earlier on August 6th, the United States dropped an atomic bomb on the Japanese City of Hiroshima, followed by another on the city of Nagasaki on August 9th.

The bombings stunned the world and compelled Japan to surrender to the U.S., ending the War in the Pacific. With the War in Europe having ended on May 8, 1945, World War II was now over.

After years of brutal fighting, the joy of hearing the news that the war was over swept across the world, and photographers armed with their cameras captured those moments for posterity.

Yet, no photo from that day is as famous or iconic as the one above, V-J Day in Times Square.

These are the hidden stories behind the photo.

The Two Were Complete Strangers

When you look at the photo, you probably think that the passion of the moment indicates that this sailor and nurse were an item. That's not the case, though.

George Mendonsa, who was confirmed as the man in the photo in 2015, had never seen the woman - a dental assistant, not a nurse - named Greta Zimmer Friedman.

In fact, Mendonsa was on a date with nurse Rita Petry - whom he later married - when the news broke that the war was coming to an end.

Mendonsa and Petry were catching a matinee show at Radio City Music Hall when the show was interrupted by pounding on the doors and shouts of "The war is over!"

Naturally, the pair - along with everyone else in the theater - spilled out into the streets to celebrate.

Friedman, who worked at a dental office near Time Square, heard the rumors that the war was over and walked to Times Square to see if the rumors were true.

It was there that Mendonsa grabbed her, spun her around, and planted a kiss right on her lips.

Alfred Eisenstaedt, who captured the moment, just happened to be right there with his camera at the right time.

Hear Mr. Mendonsa recount that day in the video above by the American Veterans Center.

Mendonsa's Future Wife is in the Background 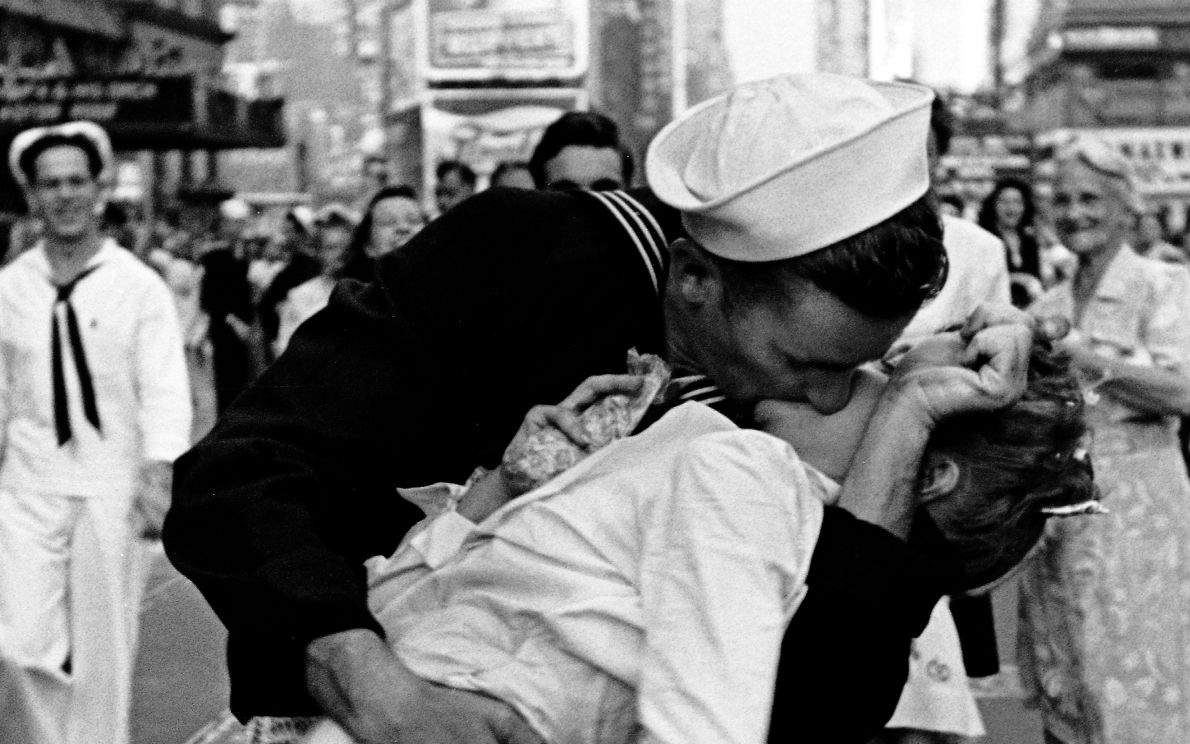 Over the years, Mendonsa has faced criticism for kissing a random nurse without her consent and for doing so while on a date with another woman.

As Mendonsa and Friedman stated over the years, though, it was not a romantic moment in the least, but a celebratory one.

Mendonsa's date and future wife, Rita Petry, wasn't bothered by it, either.

In an interview years later, she said it was just a happy day.

In fact, you can see that she didn't seem to mind the kiss, as she's actually in the background of the famous photo with a smile from ear to ear.

If you look closely at the blown up version of the photo above, you can see her above Mendonsa's right arm. 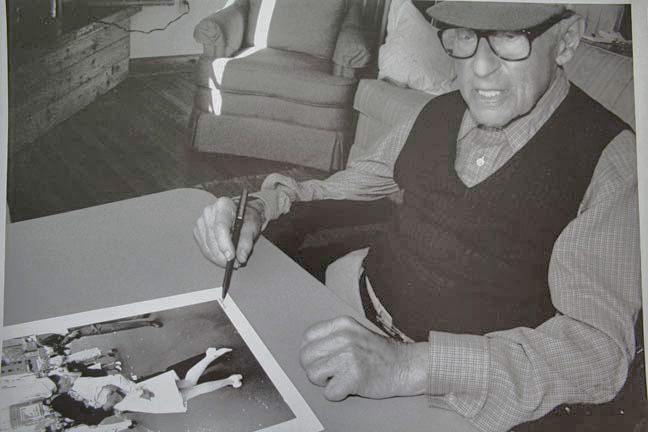 That's especially true of Times Square, where thousands of people filled the streets to celebrate in short order.

On top of that, once news broke that the war was coming to an end, the booze started to flow and caution was thrown to the wind.

As recounted by TIME, that day:

"There were probably as many fists thrown as kisses planted: in other words, once the inconceivable had actually been confirmed and it was clear that the century's deadliest, most devastating war was finally over, Americans who for years had become accustomed to almost ceaseless news of death and loss were not quite ready for a somber, restrained reaction to the surrender."

That meant that Alfred Eisenstaedt (pictured above, signing his a copy of the photo in 1995) was doing well just to document the festivities in Times Square, capturing moments in the chaos. He never had a chance to get the names of the people in his iconic photo.

Mystery Surrounded the Identity of the Kissers for Years 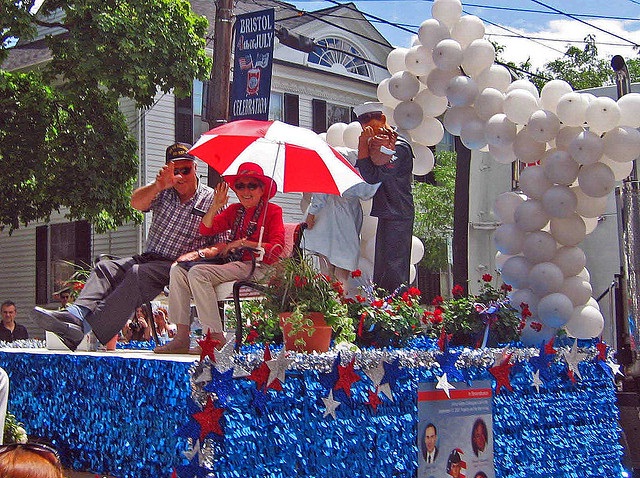 George Mendonsa and Greta Zimmer Friedman in a July 4th parade in 2009. By Josh23 (Own work) [CC BY-SA 3.0 (https://creativecommons.org/licenses/by-sa/3.0)], via Wikimedia Commons

After the photograph was published by LIFE Magazine, around 20 men and three women came forward claiming to be the two people in the famous photograph.

But in recent years, it's become commonly accepted that the two are, in fact, George Mendonsa and Greta Zimmer Friedman.

Interestingly, neither Mendonsa or Friedman saw the photo for years after the fact.

Friedman first saw the image in the 1960s and immediately recognized her figure and her hair.

Mendonsa didn't see the photo until 1980 when a friend of his happened upon the issue of LIFE Magazine in which the photo was buried on page 27.

Once he saw the photo, Mendonsa knew it was him. His wife knew that it was her in the background as well.

Still, others persisted over the years in claiming that they are the subject of the photo, but have thus far not been able to offer as much detail or proof that it's them in the photo.

The Enduring Legacy of the Photo 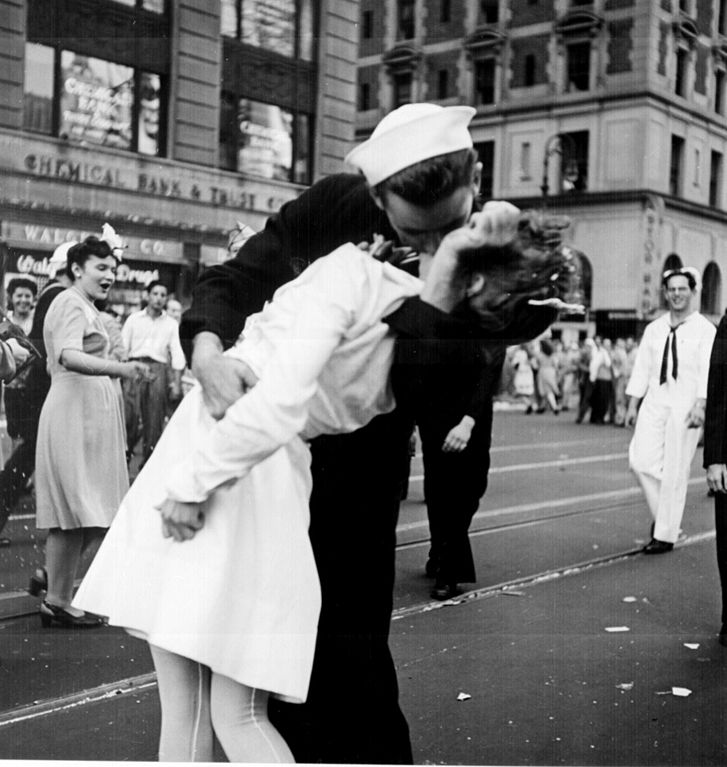 Alfred Eisenstaedt used a Leica camera to collect four frames of the famous kiss - a group of photos that happened simply out of pure luck of being at the right place at the right time.

As one of the first photojournalists hired by LIFE Magazine, he had the photography skills to capitalize on that luck to create one of the most recognized photos ever taken.

Oddly, a nearly identical photo was taken by another man, U.S. Navy photographer Victor Jorgensen, though his image (shown above) has not received nearly the acclaim as Eisenstaedt's.

Eisenstaedt's photo appeared in a large spread in LIFE, recounting how V-J Day was celebrated across the country with jubilant celebrations along with many other photos taken that day.

But none have become nearly as famous as V-J Day in Times Square.

As for the subjects of the photo, George Mendonsa is now in his 90s and lives with his wife, Rita, in Rhode Island. Greta Zimmer Friedman passed away in 2016.

Via the Department of Defense, TIME, and CNN