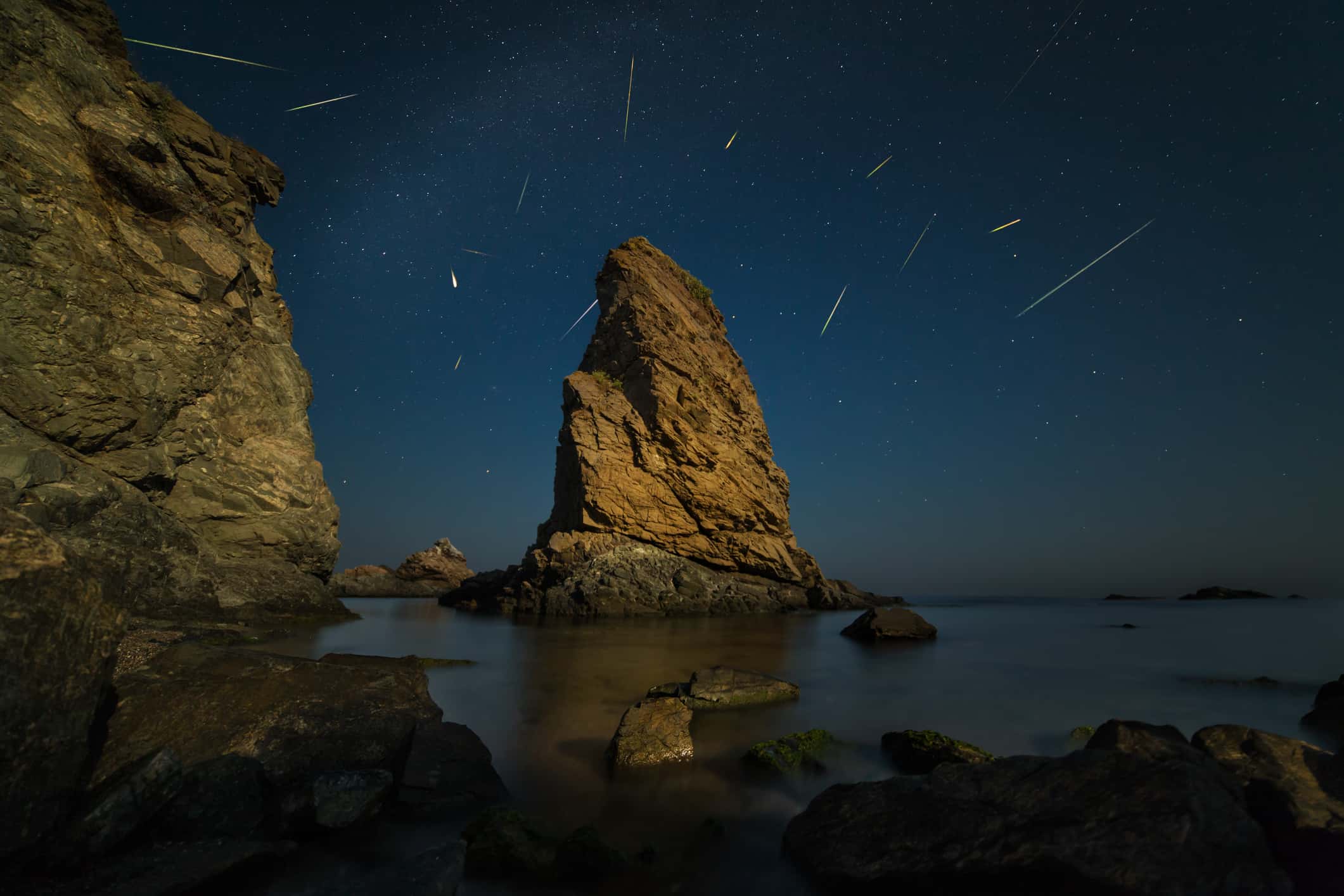 One of the most dazzling shows in the night sky is a meteor shower.

And though there are times throughout the year when they are easy to see - including the upcoming Geminid Meteor Shower on the night of December 13 into the morning of December 14, 2017 - it can be difficult to capture them in a still photo.

That's because you have no idea when a meteor will light up in the sky, which means you have to get set up with the right gear to take as many photos as possible during the meteor shower.

There's some pressure, for sure, but with these simple tips, you can set yourself up for success. 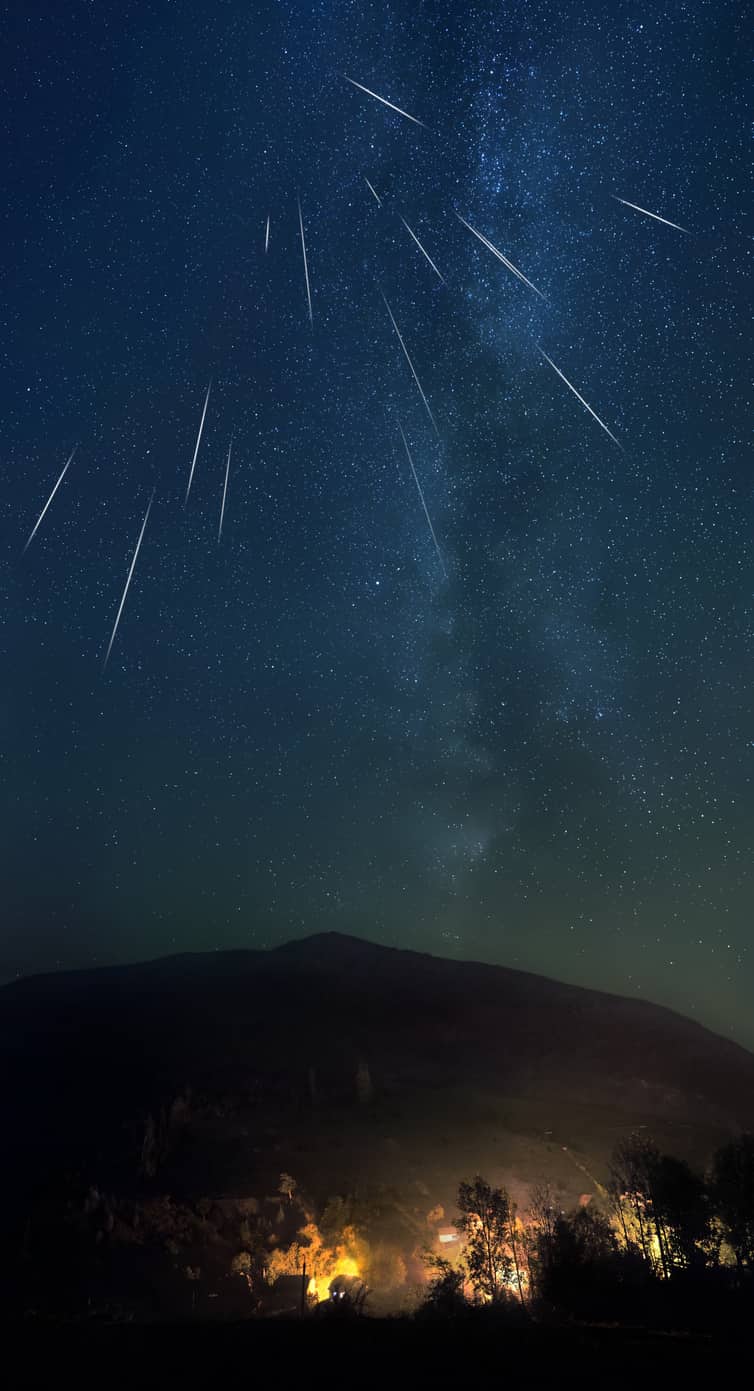 You will want your lens focused to infinity in order to get the sharpest image of the meteor shower. It's hard to manually focus a lens in the dead of night, though.

So, the day before you head out to your shoot location, head outside and set the focus on your lens by focusing on a far away object.

Once you have the object in sharp focus, tape the focus ring into place using gaffer's tape (which won't leave any sticky residue on your lens). Doing so ensures that the lens ring won't move and that you will have tack-sharp images.

If you forget to pre-focus your lens the day before, don't despair. If the moon is out, use it to focus the lens. A bright star will also do the trick.

Whatever method you use, be sure to use Live View to zoom in on the object to ensure your focus is spot on before taping the focus ring in place.

Use a Fast Wide-Angle Lens

The faster the lens you have, the better. Ideally, the lens will have a maximum aperture of at least f/2.8. Something along the lines of f/1.8 or f/1.4 would be even better.

Large apertures allow more light into the lens, meaning you can capture more light streaks from meteors as they streak across the sky.

That's why a wide-angle lens is an ideal choice for meteor showers as well. With a wider field of view, you'll be able to capture more of the sky, and more meteors, too.

In the video above by PhotoPills, you can see a wide-angle view of the 2015 Geminid Meteor shower. 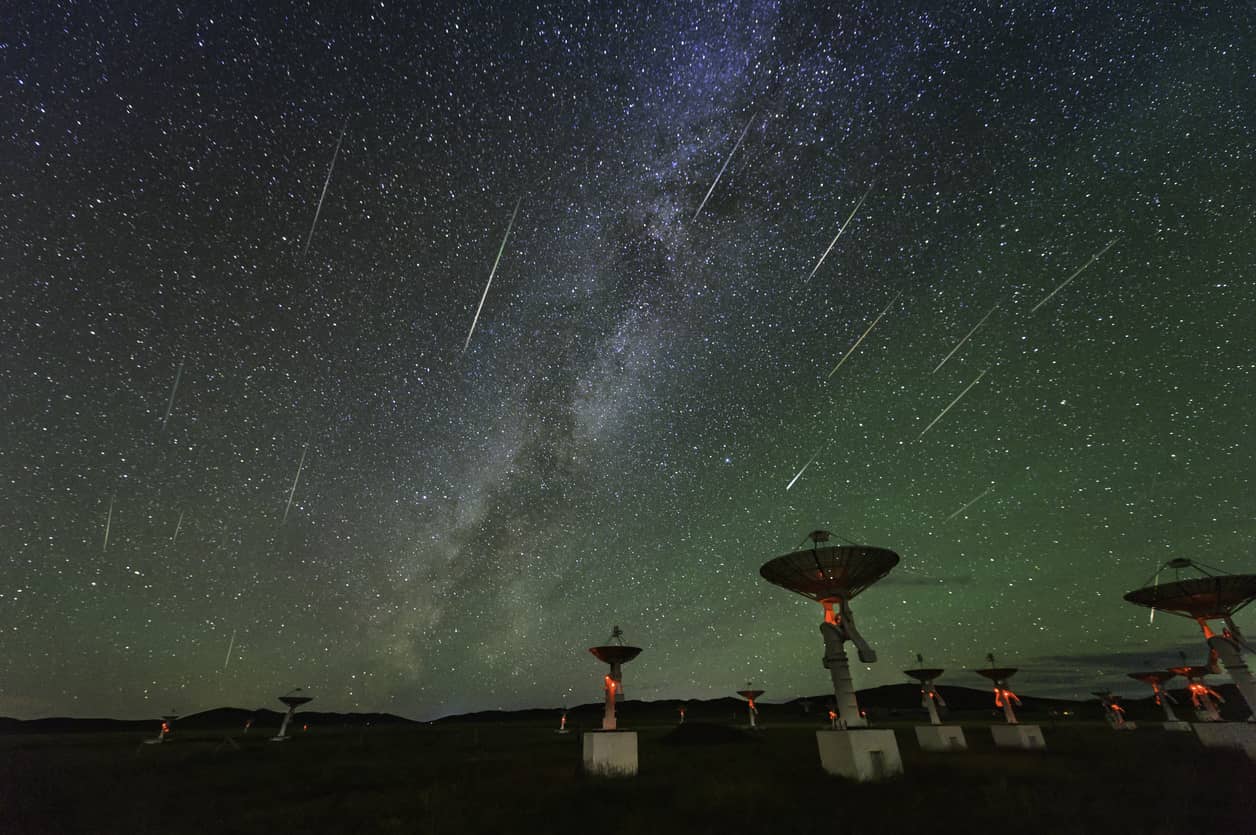 Shooting with a wide-angle lens helps you incorporate other elements, like the landscape in the foreground, to give the shot even more visual interest and serve as an anchor to the sea of stars above it.

However, remember that the more sky you incorporate into the shot, the more likely you are to capture images of the meteors. Find a good balance between showing as much sky but while also incorporating foreground interest.

Editor's Tip: If you want to expand your ability to take photos of the night sky, consider purchasing a star tracking mount, like the Vixen Polarie Star Tracker. These mounts attach to your camera, giving you the ability to track stars as they move across the sky. The result is an elimination of star trails, so your photos have sharp, pinpoint stars. Get outfitted with a Polarie star tracking mount today. 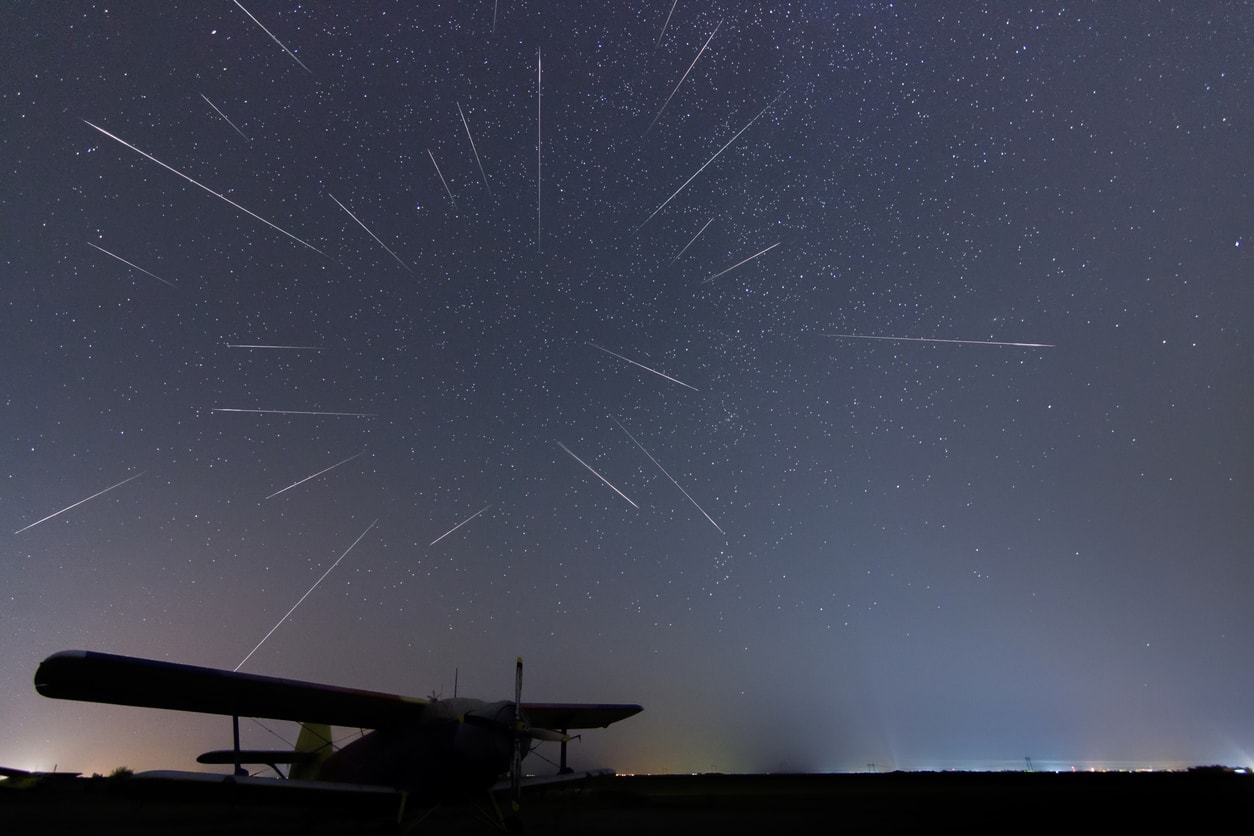 Though the settings you use to photograph meteors will depend on the particular setting in which you shoot, you can at least start with the following:

Naturally, if you start with these settings and the image is either too dark or too bright, you'll need to make some adjustments to the settings to correct that problem.

Additionally, beware of noise from using a high ISO. Some cameras can handle higher ISOs better than others, so if you can get your hands on a faster lens, do so, and then use a slower ISO to control for noise.

Do a few test shots of the night sky to get the exposure settings nailed down, and once you have a good exposure, put the camera in continuous drive mode and use a remote shutter release to snap each photo. 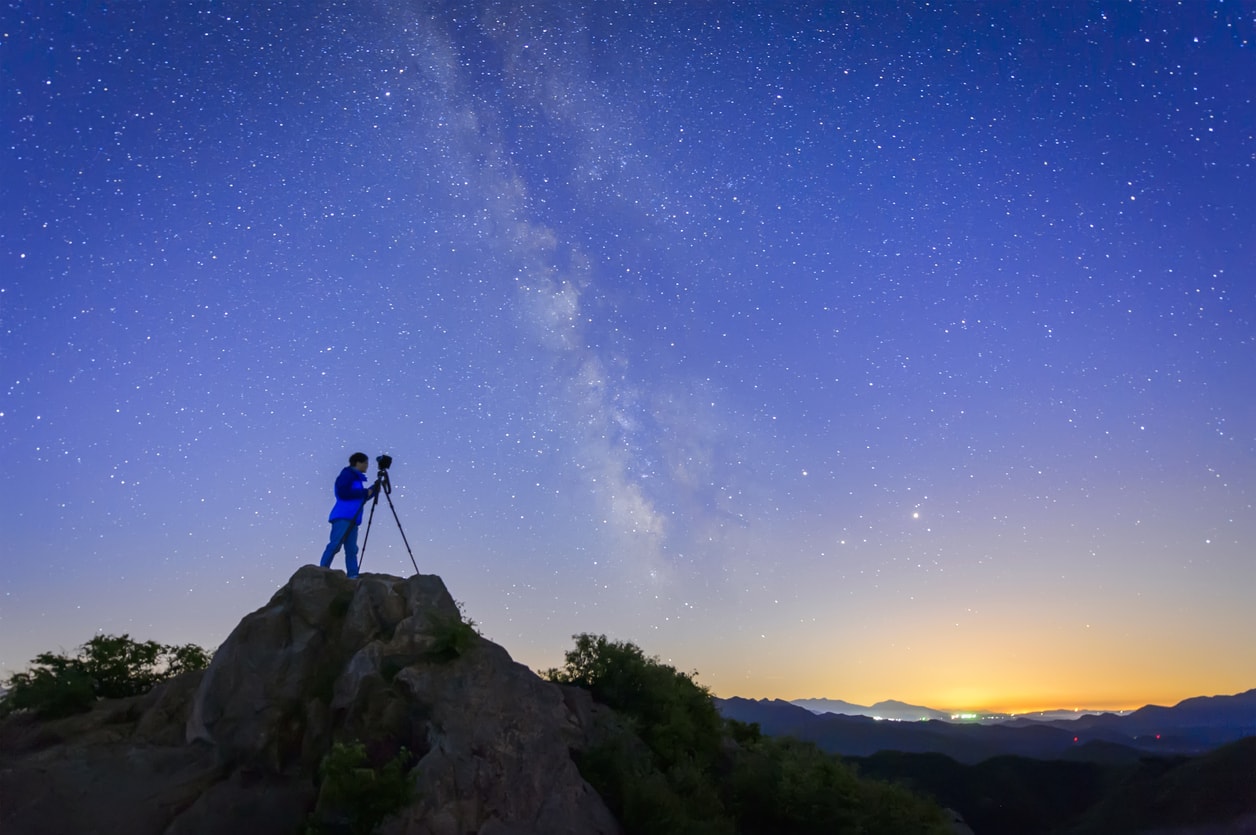 In addition to your camera, a fast wide-angle lens, and a camera remote, you'll need a few other things to maximize your ability to get high-quality photos of meteors.

First and foremost, you need a tripod to give your camera a stable base for shooting. Since your shutter speed will be anywhere from 15-25 seconds long, a solid tripod is imperative for getting tack-sharp photos.

Secondly, you need additional camera batteries at the very least (a battery grip with two batteries at a minimum) or better still, an external battery pack for your camera.

All that juice is necessary because you'll be shooting photo after photo for a long period of time - maybe even all night.

The last thing you want is to get into a groove of taking photos of a meteor shower only to run out of battery power. 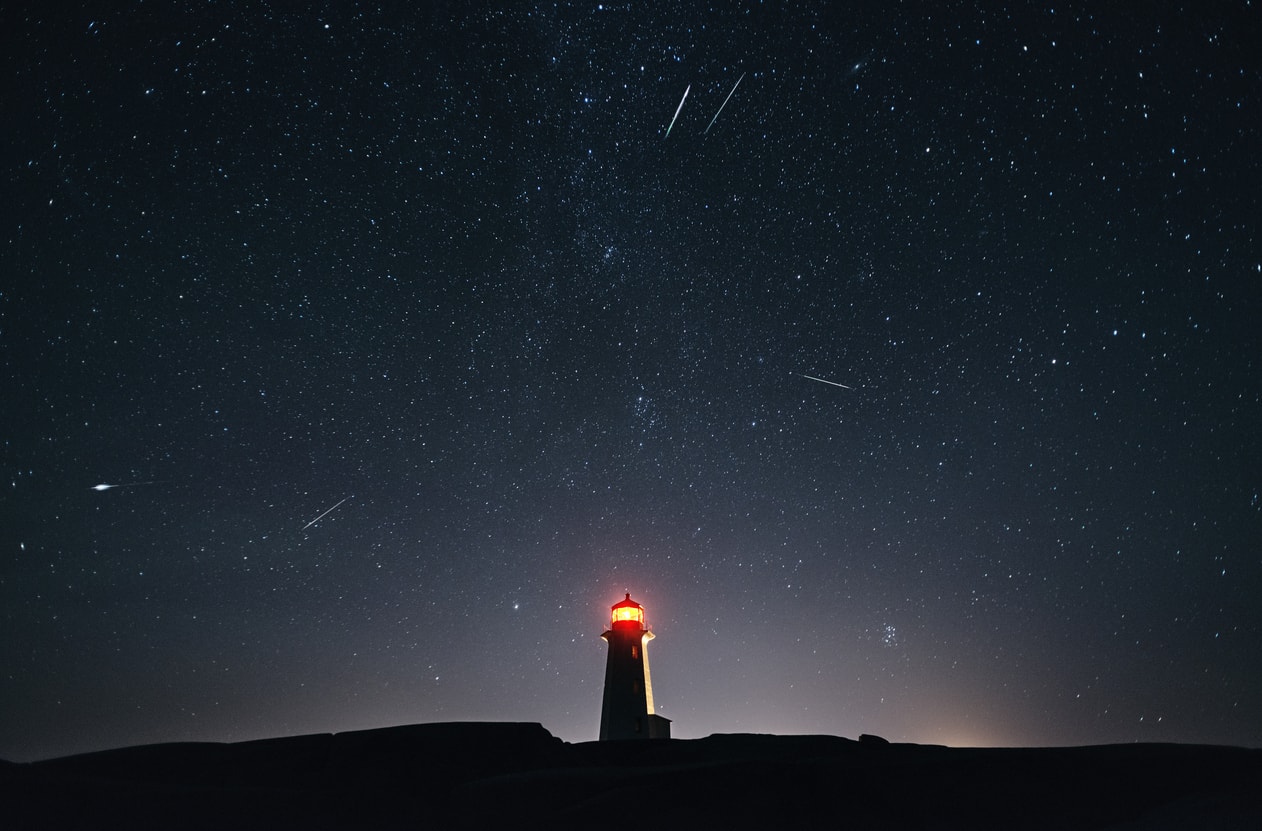 Lastly, you'll want extra storage capacity to store all the photos you take.

The larger the capacity and the faster the read/write speed of the card, the better.

Again, you don't want to miss out on taking epic shots because you have to swap out cards or because the card you're using spends too much time writing the images.

Editor's Tip: Get geared up for astrophotography with MrStarGuy. Find everything from headlamps and flashlights, external battery sources, tripods, and everything in between! MrStarGuy has a reputation for offering excellent products at incredible prices. Their customer service is top-notch as well. That's why we recommend MrStarGuy to our readers!